Two painted screens given as a diplomatic gift to Queen Victoria by the Japanese Shōgun Tokugawa Iemochi in 1860 have been rediscovered in the Royal Collection. The hand-painted screens depicting the changing seasons were part of a group of gifts sent by the Shogun to mark the signing of the Ansei Five-Power Treaties in 1858 and the resumption of formal diplomatic relations between Japan and Britain after the Shogunate’s isolationist foreign policy was forcibly broken by the “gunboat diplomacy” of Western powers. 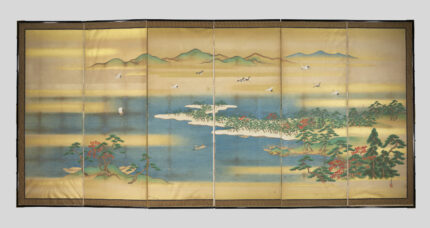 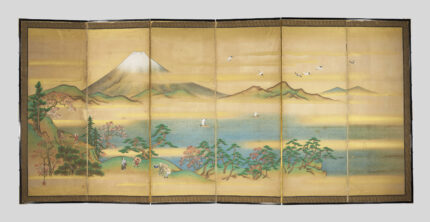 Folding screens had been prized as diplomatic gifts the last time Japan was in the game in the 17th century, and the Shōgun made them the centerpiece of his gift to Queen Victoria. There were eight pairs of painted silk screens,

plus a set of lacquer furniture, spears inlaid with mother of pearl and swords. The screens were appreciated at the time, but they were poorly documented and because there was no record of the 1860 screens in the Royal Collection, they were not believed to have survived to the present.

Two of them were rediscovered in 2017 when Dr. Rosina Buckland, Curator of the Japanese Collections at the British Museum, identified the signature of the artist Itaya Hiroharu who was known to have worked on Queen Victoria’s screens. It seems the screens were miscataloged as being by an unknown Japanese artist with no reference to their having been a gift from the Shōgun.

Little is known about how the screen paintings were displayed after they arrived in Britain, but evidence of historic repairs found during conservation suggests that they were regularly used and admired at the British Court. Specialist conservators discovered that fragments of a

Victorian railway timetable had been used to paper over torn areas – most likely because replacement Japanese paper was not readily available. Stations listed in the timetable begin at Windsor, suggesting that the historic repairs may have taken place at Windsor Castle and that the screens were displayed there.

Conservators also found that the painted silk panels had been mounted on just two to three layers of paper, rather than the usual six to nine, allowing acidic content from the wooden frames to discolour the painted

silk over time. This was likely because the paintings had to be mounted very quickly: on 11 November 1859, a huge fire broke out at Edo Castle in what is now Tokyo, destroying the completed paintings. Replacements were hastily commissioned, but just weeks later the screens’ original artist, Itaya Keishū Hironobu, died and the work had to be passed to his pupil, Hiroharu. 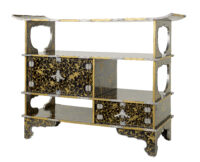 The screens are going on display in Japan: Courts and Culture, a new exhibition at Buckingham Palace dedicated to the Japanese artworks in the Royal Collection. The lacquer furniture and weapons from the diplomatic gift will also be on display, along with a selection of exceptional examples of Japanese craftsmanship accumulated by British monarchs from James I to Elizabeth II. The exhibition opens April 8th and runs through February 26, 2023.