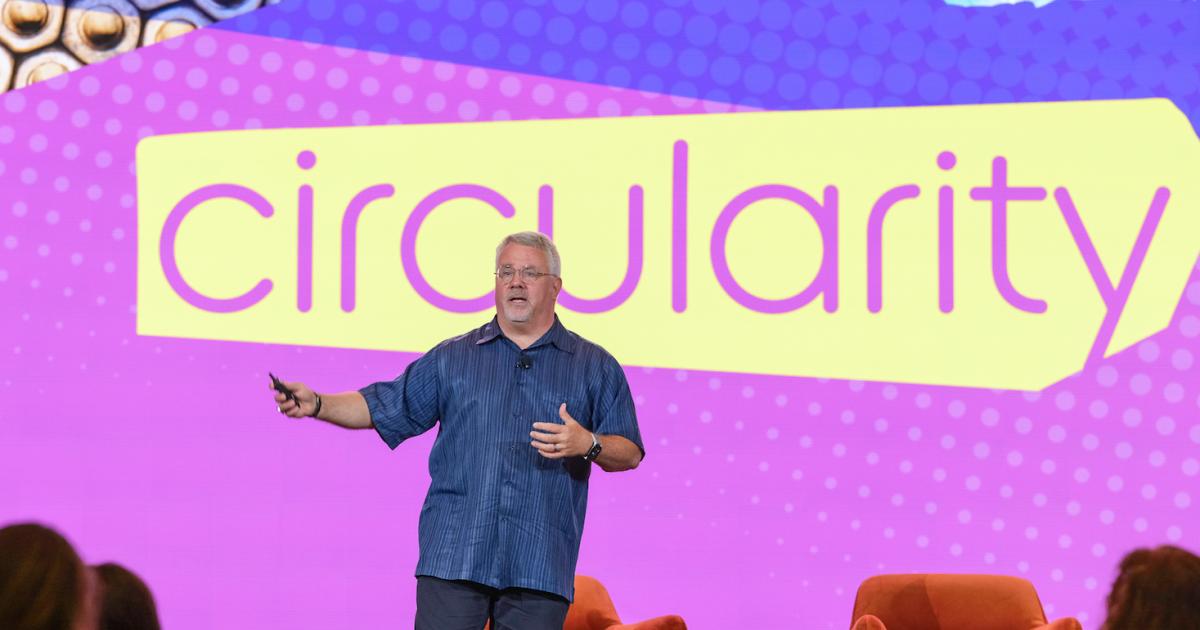 Why would a chemist make a hazardous material in the first place? That question has led John Warner on his crusade to change the field of chemistry. For four decades, Warner has been inventing molecules, collecting hundreds of patents and advocating for designing chemicals and products that don’t hurt the health of people and the environment.

Yet the Zymergen senior vice president and research fellow is still swimming upstream in his evangelism for nontoxic, circular product design that imitates patterns and principles found in nature. How can green chemistry, which he has helped popularize, be more widely embraced and established within a circular flow of materials and products?

Warner, also the president of the Warner Babcock Institute for Green Chemistry he co-founded, lately has been sharing a “materials metabolism” framework for understanding how to make use and reuse the norm for industry. At the GreenBiz Circularity 22 event on Tuesday in Atlanta, he offered the following hints for advancing green chemistry within a circular economy.

“We want our products to be in the state of use and reuse; that is the highest form of sustainability that we want to achieve,” Warner said. “Sometimes when we think about humans in the natural world, we try to pull ourselves out of it. We humans are part of the natural world.”

“But we also have to have technology that creates materials and products that are actually in harmony and compact and compatible with nature,” he added. ”It’s not one or the other. It’s actually both.”

Warner has diagrammed how closed-loop product flows intersect with circular processes in nature. (In his graphic below, the human flows of products run clockwise while the flows of natural resources cycle counter-clockwise.) Sustainability happens at the point where use and reuse intersect with stable ecosystems.

Embrace use and re-use

Use and reuse models are abundant in nature. For example, the hermit crab finds an empty shell, which it eventually outgrows and vacates to find a bigger shell, and that’s worth considering when people want to make durable goods, from cars to playground slides to beverage cups, Warner explained.

“When we do this system of use and reuse, it’s important to realize what we’re asking is that the materials conserve their composition, that chemistry, and they conserve their form,” so both the molecular clarity and the structure need to be maintained, he said.

However, that molecular structure can’t last forever. Entropy enters the picture, and things break down. A mechanical cycle of recycling follows the cycle of use and reuse. For example, a bird finds a twig and builds a nest, a beaver makes a dam from a tree. A human regranulates waste plastic to make something new. The form changes, but the chemical composition remains the same.

Yet this stage doesn’t last forever either. Polymer chains and fibers break down. Wood and plastic fray and break.

Enter the next cycle, “to what I find the most beautiful opportunity for us, what I call the materials metabolism, where we take materials and components and go to molecules and ingredients and back and forth, not to chemical recycling but to molecular reprocessing and synthesis, Warner said. “And this is where nature is such an opportunity to teach us, 3.8 billion years of evolution.”

At this point, both form and the chemical composition change.

Through degradation, some molecules are broken down and return to nature, where they may later be extracted again, making up new ingredients in a cycle of regeneration.

Through regeneration, “we’re interacting now with the with the natural world and natural resources,” Warner said, citing natural examples including the work of dung beetles, bees pollinating flowers and lions eating prey. As for products, however, very few beyond some packaging and textiles are truly regenerative at this point.

I spent more than a few eyebrow-wrinkling moments pondering Warner’s complex diagram. It’s worth a look and then another look, especially at a red arrow that points to the unanticipated consequences of people’s best-laid plans. The arrow stands for “leakage,” showing how human-made materials loops aren’t perfectly closed.

“One of the things we’ve got to realize is we have humility, when we look at systems,” he said. “It’s not the things we put on the map that’s gonna mess us up. It’s the things we leave out.,” he said. “During recycling, there’s leakage and what happens is that leakage create a porosity and at that intersection, we lose a little sustainability,” and the same is true of the other cycles.

In other words, oil spills, plastic waste on beaches and carbon dioxide emissions aren’t by design.

“What do we do with leakage, that’s an equal issue, perhaps even a more important issue. So we have human behavior where we have to design our products to facilitate the adoption of behavioral changes, but we also have to have technology that creates materials and products that are actually in harmony and compact and compatible with nature. It’s not one or the other. It’s actually both.”

Warner’s admonition is informed by his own serendipitous path through art and science, and a career straddling business and the public sector.

In the early 1980s, he was an undergraduate music major in Boston who had played in a band called “The Elements.” While taking a basic chemistry class, one day, he tagged along with a friend to a University of Massachusetts research lab. That moment catalyzed a new life path for Warner. He realized that artists and scientists both created things, and he got hooked on creating new molecules.

Before long, the teenage Warner had published five chemistry research papers and spoken at the American Chemical Society. After he earned a doctorate in chemistry at Princeton University, Polaroid recruited him. While there, a meeting at the U.S. Environmental Protection Agency led him by coincidence to Paul Anastas, a childhood acquaintance. Their conversations about toxic chemistry eventually resulted in coauthoring the seminal 1988 book, “Green Chemistry Theory and Practice,” which set forth the 12 principles of green chemistry.

Warner sparked the creation of the world’s first Ph.D. program in green chemistry, at the University of Massachusetts, and its graduates are highly sought after by corporations. Yet courses in toxicology, environmental principles and law and policy remain rare in chemistry education.

“If you Google every chemistry program on the planet, every material science program on the planet, you will find that not one university requires a chemist or material scientist to learn anything above what we’re talking about today,” he said. “So we’re asking to invent solutions to people who are not provided the skills. So let’s get on with it. Let’s collaborate not only with industry and other things, but let’s go to the universities and suggest maybe you might want to change your curriculum. And that’s what green chemistry is all about.”