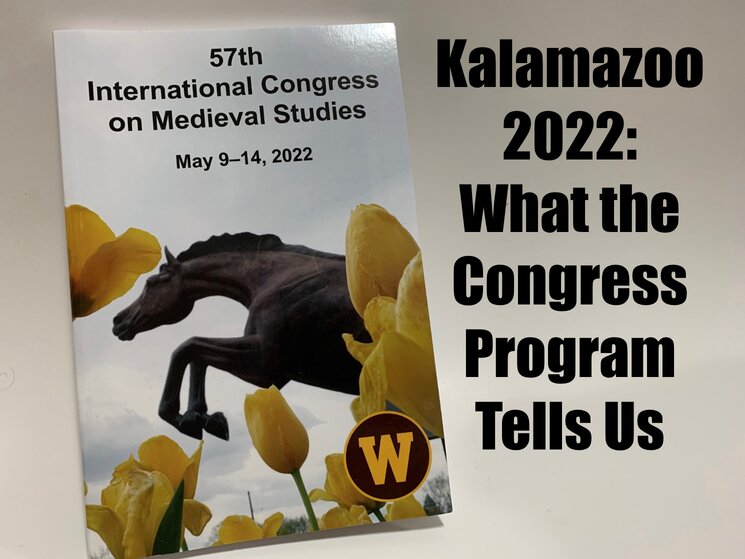 Giving a preview of the upcoming International Congress on Medieval Studies – the largest annual gathering of the medieval academic community.

Rummaging through a long conference program for trends relevant to the state of a field of study may not fulfill the strict rules of the social sciences, but for someone like me, who starts reading books by scanning the index, there is a lot of information to be gleaned from surveying the sponsoring organizations and the titles of sessions and individual presentations. Here is my admittedly idiosyncratic reading of the official program for the 57th International Congress on Medieval Studies (ICMS), May 9-14, 2022.

First, let me mention some of the paper and session titles that will often get picked up by the media to demonstrate the frivolous nature of academic scholarship in the arts and humanities: There is “Reproducing a High Medieval Horse Bit: Implications on Human-Equine Interactions,” which may inspire those employed in the quickly growing field of human-computer interaction; the charming “Biocodicological Analysis of a Medieval Birth Girdle” may send a good many readers to Wikipedia; the session on “Indecent Anchorholds,” may draw a diverse group of listeners, announced as it is as a roundtable sponsored by the International Anchoritic Society and New Queer Medievalisms; “Macbeth’s Postpartum Haze: Parturient Language and the Lost Child” may please not only because it alliterates, but also because it confirms that the range of topics at the ICMS continues to be inclusive of Shakespeare and numerous other examples of the “long Middle Ages”; and “Wielding the Sexual Body: Agency and Appropriation in The Knight Who Made Cunts Talk and The Three Ladies Who Found a Cock” may be welcomed by those who believe we cultured moderns have overcome premodern bawdiness; and also by those who delight in the thought that humanity hasn’t really changed since the Middle Ages.

It’s easy to poke fun at these and similar decontextualized presentation topics as we strain, not unlike professionals in public relations, to attract audiences to come to our events. Attending our preferred sessions and events in 2022 will be fully remote so that nobody must hustle from Valley I to the Bernhard Center. Oh wait: there will no longer be a Bernhard Center when many of us return in person next year; and downtown’s Food Dance will be gone, too!

In 2021, so Dr. Jana Schulman (Director, Medieval Institute) and Dr. Marjorie Harrington (Program Manager) shared with me, ICMS counted 2440 total registrants, and 561 of them registered on or after May 5, 2021. As of May 4, 2022, there are 1857 registered attendees for this year, and since a) the live sessions happen from May 9-14, and b) the library of recorded sessions will be open from May 16-28, the organizers count on ending up with about the same total number of registered attendees as last year.

More than 300 sessions this year will be recorded live. 1240 of current registrants provided a U.S. address. Among those providing international addresses, the largest contingents (as of May 4) hail from the UK (150), Canada (132), Italy (60), Spain (55), and Germany (36). The Congress continues its praiseworthy tradition of attracting (via a reasonable fee structure) independent scholars (123), students, and colleagues who work at community colleges. As in the past, any Kalamazoo resident may register to attend sessions for the princely price of $5.

For 2023, the ICMS organizers promise to include “traditional in-person sessions, virtual sessions via our online platform, and some new blended-format sessions that make it possible for speakers to present and audiences to attend both in person and online.” They welcome “proposals for sessions and papers both from scholars planning to attend ICMS on the ground here in Kalamazoo and those attending virtually from around the world.” This new post-pandemic procedure will make the ICMS a much more sustainable event. Will I miss “on the ground” socializing with many of my friends and colleagues who will not attend in person? Yes, no doubt. Will making new and deep connections remotely be a challenge? Absolutely. Then again, does anyone still remember when the organizers ‘spied’ on participants to make sure nobody would present remotely or have a paper read by a proxy? That practice is gone for good.

All this said, what does this year’s congress program reveal about the state of the field? Considering that session organizers and presenters and sponsoring organizations make conscious choices about the terminology and scope of their events and names, I think I can draw some meaningful observations. Please note that the numbers below reflect program searches that include a) session and presentation titles, and b) the names/titles of sponsoring organizations. This corpus reflects a snapshot of medieval studies in 2022, no more and no less.

It looks as if little has changed here, probably because working on these famous figures lends delegated authority and recognition to scholars and their careers. Thus, nobody will be surprised that Chaucer has almost twice as many mentions (31) as Gower (17), and that Lydgate trails behind (7). Dante (26) and Malory (15) are well represented, as is Thomas Aquinas (25 – one could add 7 mentions of Thomist). Boethius reaches 9 mentions. Good old King Arthur tops things off with 37 mentions, by far surpassing Robin Hood (10). Sir Gawain, no doubt because of David Lowery’s 2021 The Green Knight, reaches an impressive 17 mentions, the Green Knight himself even 20.

Nations, regions, and the world

Although most of us are by now aware that the origins and growth of medieval studies as an academic discipline were intimately linked with nineteenth- and twentieth-century nationalisms, national descriptors (including national languages, literatures, histories) remain popular: Unsurprisingly, the ambiguous terms England (22) and English (67) abound, followed by France/French (29/15), Italy/Italian (17/21), German/ic (25), Spain/Spanish (15), Portugal/Portuguese (12), Poland/Polish (5), Galicia (5), Russia/n (5), Scandinavia/n/Norse (3), and Anatolia (1). The Mediterranean shows 10 mentions, and Byzantine matters show up 22 times. Global medieval topics, which often add a welcome element of diversity, reach a strong presence in general (28), and the organizers acknowledge their importance via Geraldine Heng’s Medieval Academy plenary lecture, “An Ordinary Ship and Its Stories of Early Globalism.”

After 2019, when a heightened awareness of the troubling history of medievalist nomenclature led many in the academy to abandon the descriptor “Anglo-Saxon” for Early English, the term’s usage at conferences decreased. In the 2022 program, it is at an all-time low with 4 mentions, the same as “Early English” (4) and Anglo-Norman (4), and barely above Anglo-Latin (3) and Old Saxon (2). The same decreased use of “Anglo-Saxon” is observable in the paper titles for the 2022 Leeds Congress program(me). Less recognizably problematic descriptors like Old High German (1), Old English (22), Middle English (12) remain in use. David Matthews, in The Making of Middle English, demonstrated the contested (because nationally constructed) origins of these apparently innocuous linguistic terms in 1999.

If one goes by conference paper titles, theory (7), theorizing (9), and methodology (1) aren’t among participants’ priorities. Neither is the pandemic (8). Digital matters show up 20 times, and translation (15), ecocritical (11) and reception approaches (10) make a moderate showing. However, mainstays from the 1990s, like psychology (1) and psychoanalysis (1), have disappeared almost entirely. Nobody states their paper is Marxist (0), and historicism (1), orality (1), and deconstruction (2) have become rare. Race (15), diversity (6), blackness (1), and whiteness (1) continue at the levels reached in recent years. Teaching (22) and pedagogy (5) also retain a healthy presence. Finally, approaches relating to gender and sexuality top all other approaches (gay: 1, gender: 19, feminism: 9, homosexuality: 1, masculinity: 5, patriarchy: 2, queer: 20, sex/uality: 9, trans: 3, women: 52). The second plenary lecture, “Threatening That He Would Break Her Bones: Compulsion in Late Medieval Marriage,” by Ruth Mazo Karras, a scholar of medieval women, gender, and sexuality, confirms the impact of this area for numerous participants.

A few years ago, we had a storm in a teacup about the degree to which medievalists were activists first and (‘monkish’) scholars second (or vice versa, or both). As with the presence/absence of theory, the titles of presentations in the Congress program alone are insufficient evidence for the many political and activist objectives that may inform the fully-fledged papers. What is clear, however, is that most congress participants, even those who may consider themselves activists, decide not to advertise their activism in their paper titles: A single event, an intriguing roundtable entitled “Scholarly Resistance, Scholarly Action: Personal Experience, Medievalist Scholarship, and Social Justice Activism,” openly mentions activism and social justice. The organizer and all participants for the event have degrees and/or specializations in English (perhaps a coincidence).

Religion, most importantly Christianity, has long been a traditional center of Congress gravity, either as a professional area of study (the Center for Cistercian and Monastic Studies is integrated with Western Michigan University’s Medieval Institute) or as a continuing practice (members of religious orders participate actively in the ICMS, adding an essential and inclusive perspective to the event). Cistercian topics (21) equal Franciscan ones (21), but the Dominican order (1) is almost entirely displaced by the towering figure of Thomas Aquinas (25). Christian/ity appears 35 times, followed by religion/religious (23), spirituality (14), hagiography (13), theology (13), preaching 12, sacrament (10), Bible (6), Biblical (6), faith (5), prayer (5), monk (4), etc. Jew/ish and Hebrew are well represented, 27 and 9 times; Arab/ic and Islam show up 6 and 3 times.

I have attended Kalamazoo congresses long enough to remember when those of us laboring in the vineyard of medievalism studies were mocked mercilessly. In the early 1990s, a colleague (senior historian; another coincidence) suggested I send my paper proposal to the evening programs of the Pseudo Society, but not to his rigorously scholarly session. As a medievalism-ist, I felt pangs of imposter syndrome for many years. Thus, I am thrilled to see that ICMS 2022 mentions neo/medievalisms 20 times, and Tolkien 23 times. And I found dozens of other titles indicating presenters will be focusing on the postmedieval reception of various aspects of medieval culture. To me, medievalism is a way to be self-aware as a medievalist, to acknowledge that I am myself a participant in the process that continually reinvents the Middle Ages, but I know I am biased based on many years of professional (de)formation. A heartfelt mea culpa to all the ‘real’ medievalists out there who are (sine ira et studio) researching the ‘real’ Middle Ages! – Not.

BTW: This year the august Pseudo Society hosts an event on “Unbalanced Humors.” The papers, “Quidnam sit [h]umor feministarum?” and “Art History without a License” are clearly designed to move an audience of medievalists from dyscrasia toward eucrasia.

Medica: The Society for the Study of Healing in the Middle Ages is organizing a roundtable, entitled “Pharmacy, Pfizer, and the Pandemic: Finding Community in Tradition and Science.” I wonder if the organizers know that the largest manufacturing site in the Pfizer network is only a 15-minute drive away from the WMU campus. The 1,300-acre facility manufactures active pharmaceutical ingredients, drug products, and medical devices and exports them to 113 countries around the world. I bet most medievalists thought Kalamazoo’s only claim to global fame was the ICMS (well, and perhaps Bell’s Brewery)!

Richard Utz is professor of medievalism studies in the School of Literature, Media, and Communication at the Georgia Institute of Technology