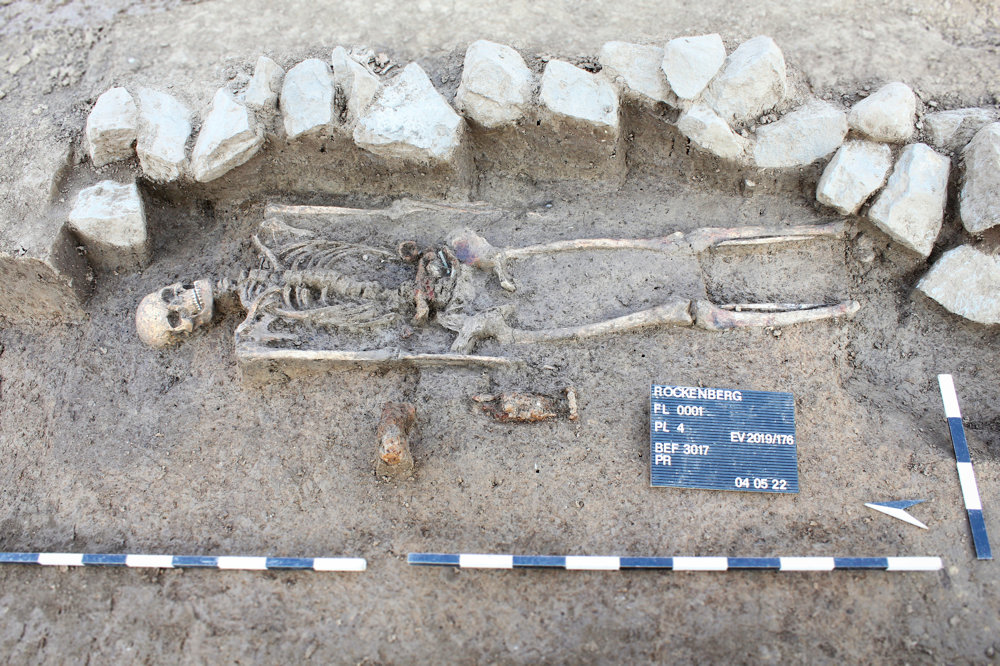 An excavation in Rockenberg, about 20 miles north of Frankfurt in the central German state of Hesse, has unearthed a large burial ground from the period after the Roman withdrawal in the 3rd century. More than 330 cremation burials and 70 inhumations dating to the 4th and 5th centuries have been discovered thus far, making the Rockenberg burial ground five times larger than any other necropolis from this period in Hesse.

There are almost no written sources documenting the period after Romans abandoned the Germanic limes and retreated to the west bank of the Rhine in 260 A.D., and archaeological remains are sparse, so the discovery of so large a cemetery has the potential to rewrite the history of this period.

Archaeologists were not only astonished by the sheer number of burials. In addition to a surprising number of children’s graves, a considerable number of weapon graves of the first Germanic settlers could also be uncovered. Among them were true rarities such as a belly burial, which is usually associated with serious crimes or the fear of revenants. The excavation team was also impressed by an archer with a preserved quiver and rich accessories, as well as a presumably youth with Roman objects.

The site was excavated as quickly as possible when rain made the dusty field a mud pit. Large sections of finds were removed en bloc and are now being excavated in laboratory conditions. Exceptional objects have already emerged, including a bronze collar with only one known parallel (it’s in Norway), and a wooden box in an excellent state of preservation with bronze fittings and a lock.

“This is really unique for the 4th and 5th centuries,” is how Prison classified the richness of the finds. Excellently preserved silver jewellery, ceramics and weapons round off a range of finds that will keep archeologists busy for years to come. “The excavation is not over here, it’s just getting started,” says [district archaeologist Hardy] Prison. Because the processing of the findings and finds already promises to bring light to a previously dark time.

The human remains and artifacts are in very good condition, protected by the waterlogged soil conditions in the area. The objects are now being examined, catalogued and in the restoration department of the State Office for the Preservation of Monuments in Hesse. The process is slow and painstaking. Depending on how many artifacts they discover, it could take up to five years before any of them are ready to go on display.