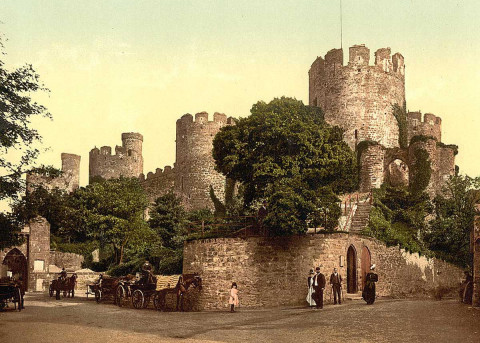 For John Goodall, the pre-eminent English scholar on castles, there is no such thing as a ‘real castle’. His aim in this clever account is to recalibrate a building type, clarify misunderstandings and remove distortions. Goodall has an easy turn of phrase and a graceful manner: ‘If people called something a castle then it is the duty of the historian to explain why they used the term, not to presume to tell them why they got it wrong’.

Employing a rich assortment of contemporary accounts, he provides the human element so often missing in purist architectural studies. For example, a toddler’s body discovered in 1303, stiff with frost at dawn in the moat below Conwy Castle, offers a ‘moment of illumination … in the midst of so much that is forgotten’. In fact two-year-old Roger, the son of the castle cook, made a seemingly miraculous recovery after a bystander offered prayers to Thomas Cantilupe, the former Bishop of Hereford. There, in the record of his canonisation process four years later, lies this story and a wealth of detail about the place of the castle and its staff within the life of the town gathered around its walls.

Goodall arranges his book as a series of short chronologically ordered entries. Written sources help illuminate how power, function and myth have always jostled on the battlements. The original seventh-century Bamburgh Castle was little more than a (highly flammable) defensive post, a kind of bird’s nest perched on a volcanic outcrop in Northumberland. When the Normans invaded, later and to the south, they made use of Roman foundations and expert masonry for the construction of their castles. Pevensey, Hastings and Dover set the pace.

Soon the blocky keep became the very image of a castle, rising above its moat. In the years of the Anarchy (1138-53) services rendered to the monarchy brought rapid reward, ennoblement and often a castle (or more). Castle Hedingham in Essex greatly enhanced the prestige of the Earl of Oxford (who had been offered the choice of five earldoms), especially in an area without stone. In time, unexceptional manors morphed into castles offering improved status to modest gentry, clergy and religious institutions. Between 1194 and 1589 an astonishing 550 ‘Licences to Crenellate’ were granted, little more than ‘passports to respectability’, as Goodall puts it. Those fearsome battlements had become no more than exclamation marks, ready to fulfil architectural or even literary ends.

Sir Gawain and the Green Knight is a Middle English poem from an anonymous pen in the late 14th century, which conjured up a castle in a wood, ‘a better barbican that noble had never looked upon’. The vivid physical description of its form and structure might have been drafted by Nikolaus Pevsner, extolling the hand-hewn stone flowering into a profusion of battlements, finials and pinnacles. Chivalry loved a castle, be it medieval or chancing its credentials in the era of Sir Walter Scott.

In its heyday the castle became an essential part of the backdrop for the vaunting ambitions of monarchs. Thus the relatively modest structure that King John built in Dublin from 1204 onwards would be expanded in 1243 to house Henry III’s immense hall, costing ten times the original, dominated by a massive ceremonial portrait of the king and queen and their barons. Exactly a century ago the British ceded Dublin Castle (by then a very different structure but still the seat of royal power) to the Irish state, a heavily symbolic act carried out with consummate tact. According to The Irish Times of 17 January 1922, ‘it was quietly handed over yesterday to eight gentlemen in three taxi-cabs’.

As their original defensive purpose evaporated, castles might serve as secure prisons or courts, redolent with unsettling associations. John Evelyn, who first saw Windsor Castle as a prison (it narrowly escaped demolition in 1652), returned to admire Prince Rupert’s decoration of the great hall with weaponry (‘martial furniture’). In that uncertain decade, the 1670s, Charles II made Windsor Castle his primary residence and by the time of Evelyn’s third recorded visit in 1683 he found rooms luxuriantly embellished with sinuous limewood carvings by Grinling Gibbons.

The hubris that led individuals to build self-indulgent castles for show was often reflected in their outsized, even monstrous, personalities. Lowther, near Penrith in Cumbria, was rebuilt in 1806 by the (very) young architect Robert Smirke to out-perform the competition, its dominant position on a gentle rise reinforced by inner and outer fortifications, more unremitting than picturesque. By 1947 the Lowther family reputation and fortune had plummeted and the castle (as opposed to the valuable acreage) was an encumbrance. The contents were auctioned off and a decade later the roofs removed. The ruin survives. Consider, too, William Randolph Hearst’s acquisition of a castle in 1925, after sending a cable which read ‘want buy castle please find which ones available’. Once he secured St Donat’s in Wales, he lavished his wealth there and used it as a warehouse for those purchases that would never reach his architectural menagerie, Hearst Castle in California. Since the 1960s St Donat’s has housed students at the international Atlantic College.

Goodall tiptoes around Disneyland and Hogwarts, and touches on the thorny problem of heritage presentation. As he surveys a 2009 reconstruction of the interiors of Dover Castle keep, dated to c.1184, he questions whether, despite all the expenditure and expertise, rooms have been created ‘that nobody from the past would recognise’. It is worrying that English Heritage has flummoxed John Goodall. When it comes to castles, he is king and in these entertaining pages he wears his crown with absolute mastery.

Gillian Darley is the author of Excellent Essex: In Praise of England’s Most Misunderstood County (Old Street, 2019).