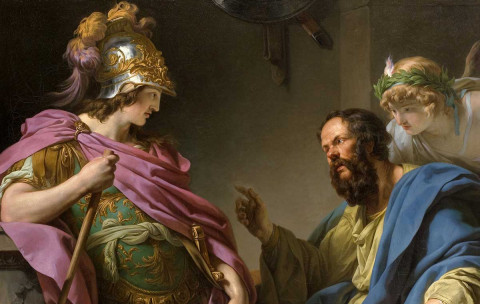 Is it ever right to deceive on purpose? In the West’s philosophical tradition, the answer, shaped by early and medieval Christian thinkers for whom lying was incompatible with a life well lived, was no. At the end of the 15th century, however, the retired intellectual and politician Giovanni Pontano broke with this tradition. Having lived through the collapse of a Renaissance Mediterranean empire, Pontano advanced two extraordinary theses: first, that misleading another person for the sake of maintaining the state and one’s fellow citizens was virtuous; and, second, that any prudent person could alter the truth, regardless of class, age, gender or education – a democratisation of deception.

Pontano worked in Naples, the centre of culture and intellectual life in the Renaissance Mediterranean in the late 1400s. Within two generations the Trastámara, Aragon’s royal family, who conquered Naples from the Angevin French in 1442, had built their new Italian kingdom into a flourishing political power with an explicitly Hispanic character and imperial ambition. At its height, Naples surpassed Florence, Rome and Venice.

Humanists bolstered Trastámaran success. Humanists were scholars and teachers, passionate about recapturing and eventually outdoing the past and about their mission of cultural renewal, which encompassed philosophy, theology, art, grammar, rhetoric, poetry, history and literature in Greek and Latin. The first generation of humanists, responding to the Black Death and the peninsula’s conquest by foreign powers, aimed to restore Italy to its ancient glory by recovering the classics. These texts, lost following the fall of Rome, turned figures such as Cicero and Caesar into exemplary epitomes of virtue. Humanists thought that, if they taught the next generation of Italy’s elite with the same education that the great figures of ancient Greece and Rome received, they would produce a virtuous ruling class on a par with, if not exceeding, these classical paragons. These elites would then bring stability to Italy and Europe.

The Trastámara were generous patrons of humanists, incorporating them into Naples’ new government and hiring them to teach their children. Pontano was one such humanist. Born into poverty, Pontano was a quick student, gifted writer and savvy diplomat. He joined the Trastámaran court in 1447 and rose over the next 50 years to become the kingdom’s prime minister and foremost ambassador. Pontano also taught some of the Trastámaran heirs, writing treatises on the virtues necessary for a prince to have for a state to function properly.

Through his knowledge of the classics, Pontano knew that some ancient writers believed deception was vital for leaders to maintain society. In the Republic, Socrates argued that the leaders of the ideal republic must construct a creation myth, which they know to be false, to justify to their citizens why society is divided into castes. Socrates thought lying should only be used by those who govern ‘to benefit the state, but all the rest [of society] must avoid having anything to do with such a thing’, or else good relations between citizens would disintegrate.

Though some early Church fathers supported this, St Augustine solidified the Christian rejection of deception. Augustine defined a liar as a person who ‘has one thing in his heart but expresses another thing with his words’. This definition reflected Cicero’s account of simulation and dissimulation, the two vices which Aristotle had opposed to the virtue of truthfulness. Simulation is the excess of truthfulness, when a person makes more of the truth through exaggeration, boastfulness or ostentation. Dissimulation is the deficiency of truthfulness, when a person downplays the truth through deprecation or irony. For Aristotle, Cicero and Augustine neither were virtuous qualities.

Pontano’s educational and diplomatic efforts were ultimately futile. The French invaded Italy to reclaim Naples, taking the city in 1495. Alfonso II, whom Pontano had taught since childhood, abdicated shortly before the army arrived due to a mental breakdown. In the monarchy’s absence, Pontano was senior government official, forced literally to hand over the keys to the kingdom to the French, a move which garnered him a reputation throughout Italy as a traitor. He soon retired amid controversy and disgrace.

Pontano’s treatises celebrated exemplars of virtuous deception: Julius Caesar, who pretended to have more faith in his troops than he really had to prevent their fearing a superior German force; St Francis of Assisi, whose deception stopped hunters from killing a rabbit; a nameless, unlearned shepherd boy who downplayed his own cleverness to trick an educated judge; and Pontano’s own mother, who feigned not being proud of his accomplishments to make him strive for greater excellence. In every case Pontano distinguished virtuous deception, which aims at the wellbeing of others, from vicious deception, between ‘fictions undertaken for the sake of public utility and instructing the human race and those undertaken out of insincerity’.

Pontano never explicitly connects this to the fall of Naples, but his point is clear. Maintaining a state requires not only virtuous leaders, but a virtuous populace. All citizens are responsible for maintaining the well-being of society through virtuous action, even if that means deceiving for the greater good.

John-Paul Heil is a PhD candidate in early modern history at the University of Chicago.