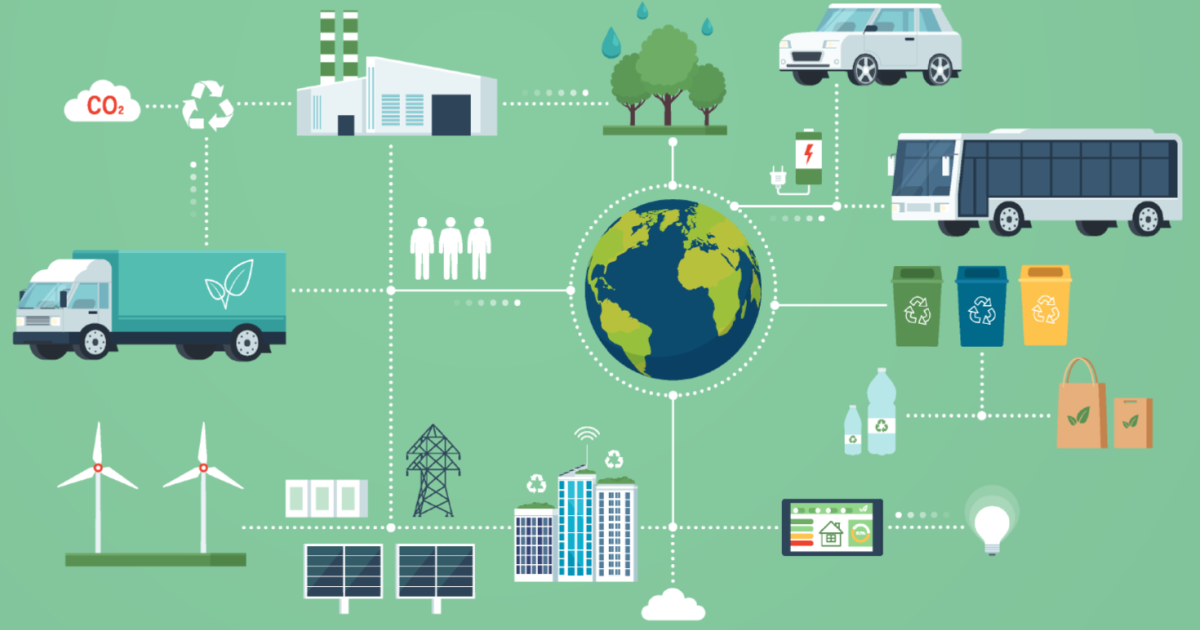 Moving goods from Point A to Point B has long been a polluting process, thanks to the dirty petroleum-based “bunker fuel” used to power most oceangoing vessels, the energy- and carbon-intensive world of aviation and other legacy fuels and technologies. And, alongside both, the trucks and trains that move things on terra firma. All are considerable sources of carbon pollution, not to mention other problematic emissions into the air and water. And all have been under pressure to change.

At long last, those changes may be en route. A truckload of technologies, partnerships and global agreements are putting solutions, some of them decades old, on a fast, or at least faster, track. Combine that with corporate and government purchasing commitments that stoke demand for greener logistics options, along with stepped-up regulatory pressure to decarbonize the transportation sector, and you have the makings of a disruptive shift.

That shift could be seen last fall during “Transport Day” at COP26, in Glasgow, Scotland. Among the commitments: Nations representing 40 percent of aviation emissions committed to support emissions targets for aviation aligned with the Paris Agreement. Twenty airline members of the World Economic Forum’s (WEF) Target True Zero initiative committed to use new technologies, such as electric, hydrogen and hybrid aircraft, to reduce aviation’s climate footprint. The Sustainable Aviation Buyers Alliance, launched earlier in 2021, added members to its efforts to aggregate the purchasing power of fuel buyers to stimulate markets for cleaner aviation fuels. Still another group of large companies joined an initiative launched by WEF called the First Movers Coalition. It’s focused on eight sectors, including shipping, aviation and trucking, considered among the most challenging to transition to zero emissions. And nearly 20 nations committed to developing zero-emission shipping routes between ports — so-called “green shipping corridors” that will act as testbeds for emerging technologies.

Following the blueprint of climate tech

As these initiatives amply demonstrate, decarbonizing logistics involves the interplay of technologies, policies and market developments: the combination of accelerating the development of new fuels and propulsion systems, implementing regulations and policies, and stimulating demand, which also unlocks both public and private capital. It’s a recipe for success we’ve seen multiple times before in climate tech in ramping up everything from solar energy to electric vehicles to green chemistry innovations.

Take sustainable aviation fuel, a drop-in replacement for the conventional diesel fuel that powers most planes. It’s been around for years, plodding along with a market share that’s, well, a drop in the bucket. But over the past two years, major corporations that fly millions of miles a year — including Bank of America, Deloitte, JPMorgan Chase, McKinsey, Microsoft, Netflix and Salesforce — have pressed airlines to use more of this low-emissions fuel in their operations, sending much-needed demand signals to the market.

These fuels — which can be made from a variety of feedstocks, including used cooking oil, agricultural residues and municipal solid waste — are aviation’s most promising near-term decarbonization solution, given their potential to reduce up to 99 percent of greenhouse emissions on a life-cycle basis compared to conventional jet fuel, according to a 2021 report from McKinsey and WEF. Aviation accounts for about 2 percent of global carbon emissions, although the industry has committed to decarbonize by mid-century or sooner.

Or take the oceangoing ships that deliver many goods we buy, from carpets to car parts. They, too, are being redesigned to run on cleaner fuel or even partly on wind.

Today, maritime shipping powered by heavy fuel oil produces about a billion metric tons of climate pollution annually — about as much as all of America’s coal-fired power plants combined — accounting for 3 percent of global carbon emissions. Cargo ships also produce 10 to 15 percent of the world’s manufactured sulfur oxide and nitrous oxide emissions.

In October, a group of companies announced a first-of-its-kind effort to switch all ocean freight to vessels powered by zero-carbon fuels by 2040. Amazon, IKEA, Michelin, Patagonia and Unilever were the first signatories to a statement facilitated by Cargo Owners for Zero Emission Vessels.

Some critics would like to see these initiatives gather steam. More than 50,000 merchant ships carry around 80 percent of global trade, and oceangoing cargo volumes are projected to grow by as much as 130 percent by 2050. Last fall, a coalition of “environmental and public health advocates, scientists, shipping experts and shoppers” proactively launched Ship It Zero, a campaign to prod big retailers — Amazon, IKEA, Target and Walmart were on the initial hit list — to commit to move products on zero-emissions ships by 2030.

The decarbonization of trucks is also picking up speed. There, too, the set of solutions is varied, from low-carbon fuels to electrification.

In the United States, more than 70 percent of goods spend time inside a truck, according to the American Trucking Association, whose industry is responsible for almost 7 percent of greenhouse gas emissions. Trucks are notoriously hard to decarbonize because the batteries needed to electrify them add substantial weight, not to mention requiring precious recharging time.

Still, electrification efforts are rolling along, with battery-operated big rigs expected from Daimler, Volvo, VW and Tesla in the next few years. The research firm Wood Mackenzie expects the number of electric trucks on U.S. roads to rise from 2,000 in 2019 to more than 54,000 by 2025. And some of these trucks go a long way to solve range anxiety: Tesla’s forthcoming Semi, for example, is claimed to have a range of more than 600 miles, a respectable day’s work for most truckers.

What about existing trucks? They, too, can decarbonize. Remora, is commercializing a technology that reduces emissions from long-haul trucking by sucking up carbon dioxide directly from the tailpipe. Another startup, Booster has converted thousands of diesel vehicles to renewable fuels. If they succeed, Booster, Remora and other innovators could enable existing fleets to keep rolling for years, rather than having to be traded in for electrified models.

Across the transportation spectrum, many promising fuels and technologies may simply be bridges to even cleaner and emissions-free logistics. For example, for all the efforts aimed at helping sustainable aviation fuels gain altitude, they may eventually give way to electric- and hydrogen-powered planes, at least for shorter flights.

Similarly, alternatives to bunker fuels for oceangoing ships could be displaced in part by newer technologies. Last August, Maersk, the world’s largest shipping company, said it will introduce eight large container vessels operated on methanol, and established a new Danish facility to produce the approximately 10,000 tons of carbon neutral e-methanol those vessels will need. Could wind-powered cargo ships be sailing far behind?

First Movers Coalition — launched at COP26 by the World Economic Forum, it seeks to create demand for low-carbon approaches to shipping, aviation and trucking, among other technologies.

Remora — its tailpipe-sucking retrofit for long-haul trucks could be a game changer in reducing the emissions of existing vehicles.