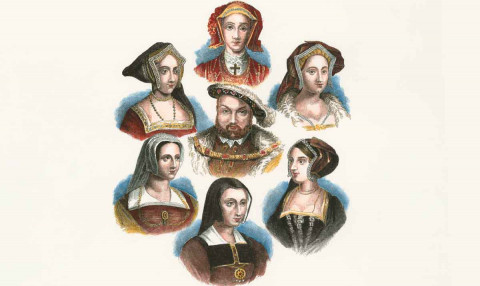 For a long time – in the view of my publisher far too long a time – I’ve been writing a new history of the women who were married to Henry VIII. At first glance, this seems an unnecessary endeavour: surely – with apologies for the pun – they have been done to death and there can be nothing new to say? But there are, in fact, many new things to say and, in the process of figuring out what they are, I’ve hit the obvious problem at the heart of much writing about early modern women: we see them chiefly through the eyes of men. We have to scrape off the accumulated misogyny of centuries to see Henry VIII’s queens as they really were.

Henry’s point of view has, of course, dominated. That Anne of Cleves is remembered as the ugly ‘Flanders Mare’ is a triumph of Henry’s PR (albeit not his phrase) and a measure of his power over the narrative, even centuries later. That Kateryn Parr retains a reputation as a dowdy old widow whom Henry married as a nursemaid reveals little of who she actually was. We need to go far beyond the king’s perspective – but other source material is also often problematic.

Henry VIII’s queens lived in a highly patriarchal era. Even those who are hailed as the most progressive of the period in gender terms were relentlessly sexist: Thomas More is lauded for educating his daughters as highly as if they were boys, but he made a point of humiliating his wife, Alice, before visiting guests, by pointing out that he had not married her for her beauty. He was a man of his time. In the 16th century, women were believed to be biologically, morally, emotionally and mentally weaker than men. Such convictions were upheld by both contemporary medical belief and theological understandings, and we should imagine that women, too, internalised this. The result is that many of the sources that exist about these royal women were written by people – largely men – who were predisposed to judge their actions in highly gendered terms. Many of these damning indictments have then been repeated by successive generations of historians.

There is one final distorting layer to remove. Many historians who have written about the queens have relied solely on the Letters and Papers, Foreign and Domestic of the Reign of Henry VIII – the printed 19th-century calendars of the collated state papers, fondly known as L&P. The calendars are catalogues of Tudor letters, papers, reports, grants, commissions, ambassadorial correspondence and memoranda, assembled in chronological order and summarised, in a monumental work of scholarship by Victorian archivists. The L&P are the essential starting point for research into the period – but they should not be the end point. The extent of their précis vary and it is important, wherever possible, to return to the manuscripts, or even full transcriptions: to read letters not in the abridged, third-person style of the calendars but in the fresh and vital first-person accounts of the original documents.

This is even more true when writing about women. The calendars were prepared to fit a certain vision of what was thought historically important: what interested Victorian men about 16th-century women’s lives is not all that interests us and our conclusions may differ wildly. (The dreaded phrase ‘nothing of importance’ should serve as an alarm bell.) Victorian assumptions have unconsciously framed all subsequent analyses of the queens. With texts originally in languages other than English this is compounded: they are now almost universally quoted in their 19th-century translations – which carry a distinctly Victorian flavour.

What does this mean? Well, among other things, as Nadine Akkerman, who spent 15 years working on the correspondence of Elizabeth Stuart, Queen of Bohemia before writing her biography, could attest, resurrecting early modern women takes time. But good things come to those who wait.

Suzannah Lipscomb is author of The Voices of Nîmes: Women, Sex and Marriage in Early Modern Languedoc (Oxford University Press, 2019), host of the Not Just the Tudors podcast and Professor Emerita at the University of Roehampton.