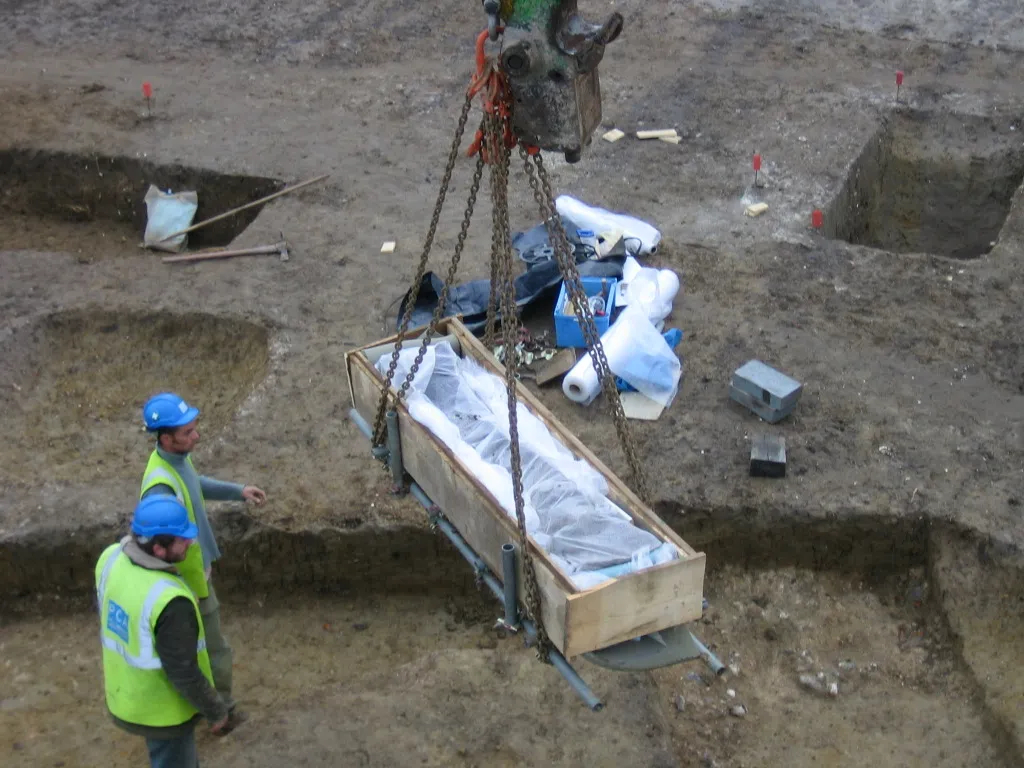 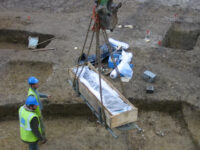 After 15 years of archaeological investigation and extensive research, a Roman site with unique features including a mausoleum and evidence of massive silver production has been published in a new monograph by Pre-Construct Archaeology.. Grange Farm in Kent was first settled in the Late Iron Age (ca. 100 B.C.) but became much more active after the Roman conquest because it was located a mile north of Watling Street, a major Roman road that ran from Dover to London.

In 2005, Grange Farm was archaeologically excavated prior to construction of a housing development. Over a year of excavations, archaeologists discovered a 4th century aisled building, walled enclosures from orchards, evidence of metalwork in both iron and silver and a large mausoleum containing the remains of an adult woman in a lead coffin.

The rectangular wooden building was divided into three long aisles dividing the usage areas — a living space on one end, a metalworking shop on the other end and a fireplace dividing the two. This building design was relatively common in Britain and was used for a variety of purposes, but this example is unique for the large quantity of litharge, a byproduct of the cupellation process used to separate silver from smelted lead ores, found there.

A small amount would be expected from the metalworking facilities in the aisled building, but archaeologists discovered 15 kg (33 lbs) of it, the largest amount ever found at a Roman site in England. So much litharge could only have been produced by a silver extraction operation of industrial proportions, and yet, the dig did not discover any traces of the type of infrastructure that would have been necessary to run an operation on this scale.

The mausoleum is another mysterious anomaly. It dates to the late 3rd or early 4th century A.D. and would have originally stood two stories high. Built on top of a raised terrace, it was visible for miles around. The interior had a tessellated red mosaic floor, extremely rare in Roman Britain, and contained a lead coffin holding the remains of a middle-aged woman. Lead coffins were luxury items in Britain, and the combination of lead coffin inside a mausoleum indicates the woman was someone of wealth and status.

She was not one of the idle rich, however. Osteoarthritic lesions found on her bones attest to her having labored hard at some point in her life. Stable isotope analysis of her teeth suggests she may have been a local, but the results were not conclusive. She may also have originated in southern England, eastern England or continental Europe. Radiocarbon dating points to her having died around the time the mausoleum was built.

The grand mausoleum dominated the landscape for centuries before it fell to ruin by the time of the Norman Conquest. Anglo-Saxon artifacts were found in the mausoleum, including a solid silver gilded Nydam Style brooch from the late 5th century, one of the earliest Scandinavian-style brooches ever found in England, and two spearheads from the same period. There is no evidence of Anglo-Saxon occupation at Grange Farm; they didn’t live there and nobody was buried there. Archaeologists suspect these valuable objects may have been left deliberately as votive offerings, suggesting the Anglo-Saxons, then still new immigrants to the area, held the mausoleum in reverence.

“The brooch is a very unusual find—stylistically it is closer to southern Scandinavia and is one of only a handful of similar brooches found in Britain,” added [Dr. James Gerrard, Senior Lecturer in Roman Archaeology]. “Both the spears and brooch are unusual and high-status objects on an otherwise unassuming rural site.

“The mausoleum wasn’t in use at this time, and in fact it appears that the grave of the elderly lady was disturbed in later years—possibly by early medieval graverobbers or relic hunters.”

As well as the litharge and the mysteries surrounding the mausoleum and the elderly lady in the lead-lined coffin, the team of archaeologists also found 453 Roman coins, more than 20,000 fragments of pottery and 8,000 animal bones.