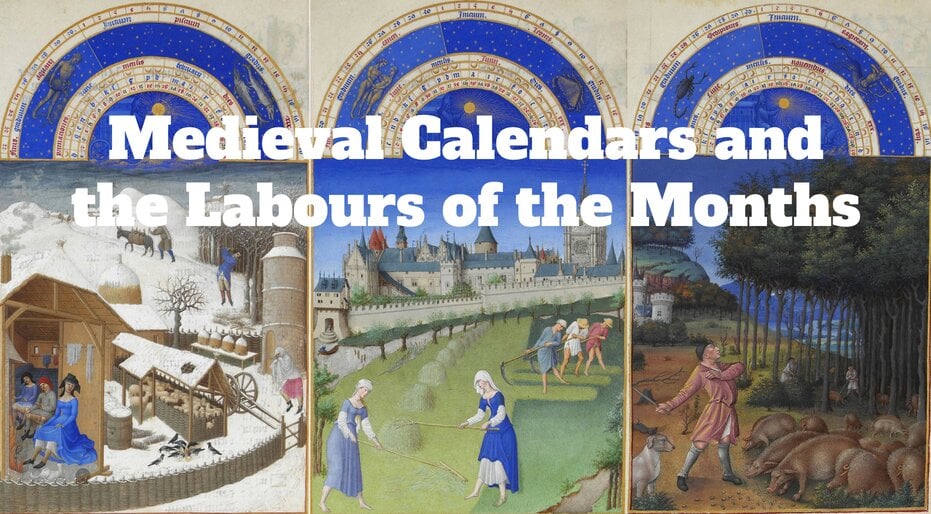 Among the treasures that remain from the Middle Ages are the illuminated calendars featured in books of hours, breviaries, and other manuscripts intended for prayers. During the thirteenth century, calendars began to be illustrated with scenes of peasants at work. Called “labours of the months,” these scenes typify medieval and Renaissance calendars. How were medieval calendars and the labours of the months organized, and what do they tell us about visual representations of the peasantry?

The labours of the months emerged in thirteenth-century calendars, in the shape of small vignettes at the bottom or outer edges of the calendar pages. Two centuries later, the labours of the months occupied even more space on calendar pages, often at the top or at the bottom of the folios, with floral ornaments framing the left and right sides of the calendar itself.

But when featured in the most expensive prayer books, the labours of the months could cover full folios. At the close of the fifteenth century, lavish illuminations were an indicator of the high status of their owner – such expensive manuscripts served no practical use because of their size and price, but they demonstrated one’s rank in society.

Today, the best-known illuminated calendars come from Isabella of Castille’s Breviary (British Library, MS 18851) and the so-called Très Riches Heures du Duc de Berry, a Book of Hours housed at the Condé Museum in France (MS 65). With their delicate ornaments and wealth of detail, these late fifteenth-century calendars yield some of the most popular representations of peasants at work.

Medieval calendars usually occupied twelve pages: one page per month of the year. In current western usage, the first day of a new year falls on January 1. But in many European Christian countries – such as England, Italy, France, and Spain – and up to the sixteenth century, the year changed on the day of the Annunciation on March 25. The calendars, however, started with the month of January.

The first day of a new year, then, was March 25. Since the Annunciation was a major Christian holiday, it is no coincidence that the data also corresponds to the beginning of the spring season, itself associated with rejuvenation and rebirth. Culturally, then, the year ended and opened with the rebirth of nature, reinforcing the idea of the cycle of life and seasons.

The calendars presented a list of universal saints and holidays, such as
the feast days of the Apostles, Evangelists, and martyrs of the Church, the holidays attached to the Virgin Mary, and so forth. Besides these universal celebrations, the canon of saints varied in time and place; some saints were only celebrated locally (within a diocese or parish); others emerged at a certain point in time.

A calendar’s list of saints allows historians to identify its geographical origin or “use.” When roaming databases of illuminations, you might encounter expressions such as “Book of Hours, use of Paris,” meaning that the calendar was tailored to suit the religious practices of the Paris area where certain saints were more prevalent than others.

Likewise, the occurrence of particular saints sometimes facilitates the dating of a calendar (and of its manuscript). If saint X was only canonized in 1300, then the calendar mentioning their holiday could not have been written before. In calendars that have been used for decades and decades, the list of feasts was amended to follow the emergence of new devotions and the disappearance.

The Labours of the Month

For each month of the year, the artists depicted scenes of everyday rural life – the pruning of trees, harvesting and sowing, winemaking, and hunting. Each page presented a different scene, appropriate to the time of year (spring in May, snow in winter, harvest at the height of the summer).

The content of the labours of the months was fairly standardized, making them recognizable to a medieval audience in the blink of an eye. While the calendars followed a predetermined template, they were adjusted to local realities; for instance, in southern Europe, sowing started earlier than in northern Europe. Calendars usually reflected these differences, such as a longer wintertime in Britain than in Italy.

Regardless of these local differences, the general outline of the labours of the months followed a well-worn cycle. The winter months, starting with January, usually depicted indoor scenes (feasting, keeping warm by the fire, etc.). The fate of February depended on local weather. At the beginning of spring, work began outside to prepare the fields and trees. At the height of spring, usually in April and May, the calendar marked a pause to celebrate the rejuvenation of nature with scenes of leisure, love, and blooming flowers.

From June to August, artists painted peasants hard at work, raking hay, reaping wheat, and threshing grain. In September, the scenery changed, the summer activities giving way to winemaking, usually followed by plowing and sowing. The last two months of the calendar year were devoted to fattening and killing boars and pigs, eaten during the feasting month of January. The cycle then started again undisturbed.

Even the colours applied to the scenes by late fifteenth-century artists followed a number of conventions, best illustrated in Isabella of Castille’s breviary. Springtime had green colours, evocative of the new leaves and grass cover. Scenes of the harvest on hot summer days were bathed in gold and yellow tones. Come fall, brown colours dominated. In January and February, the white snow and bluish tones evoked the cold days of the season.

The Myth of Peacefulness and Serenity

The labours of the months featured idealized vignettes of peasant labour, based on observation and long-standing traditions. But these positive and serene representations of the peasantry are a far cry from literary texts describing peasants in a much less favourable light. They also stand in stark contrast to elite anxieties towards peasant revolts, which were a widespread phenomenon in Europe in the late Middle Ages.

Calendar pages, therefore, are tranquil and peaceful. Everyone is busy with work – no strife, no conflict. The weather is as it is supposed to be, with no floods, droughts, or storms. The peasants are usually properly dressed and appear well fed and happy at work. Ideas of poverty, hunger, and anger are kept at bay. The peasants labour dutifully and obediently, as they are supposed to (at least from the point of view of the elite owners of the calendars). Even the peasants’ houses are immaculate and clean, warm and well-lit.

Death itself is remarkably absent from the calendars. No medieval calendar features funerals, old age, or decrepitude. The only death that occurs in the calendar pages is that of the pig, usually slaughtered in December for the meat supply and coming feasts. The slaughter scenes are silent and clean – no bloodshed, no agony. In November of the next cycle, the resurrected pig eats the acorns harvested by the peasants.

Perpetual and predictable, the labours of the months return unwaveringly year after year, season after season – a peaceful translation of the order of life, of society and nature that God has created. Elaborated for a wealthy audience, calendars carry the vision of a good, inoffensive, and dutiful peasantry.