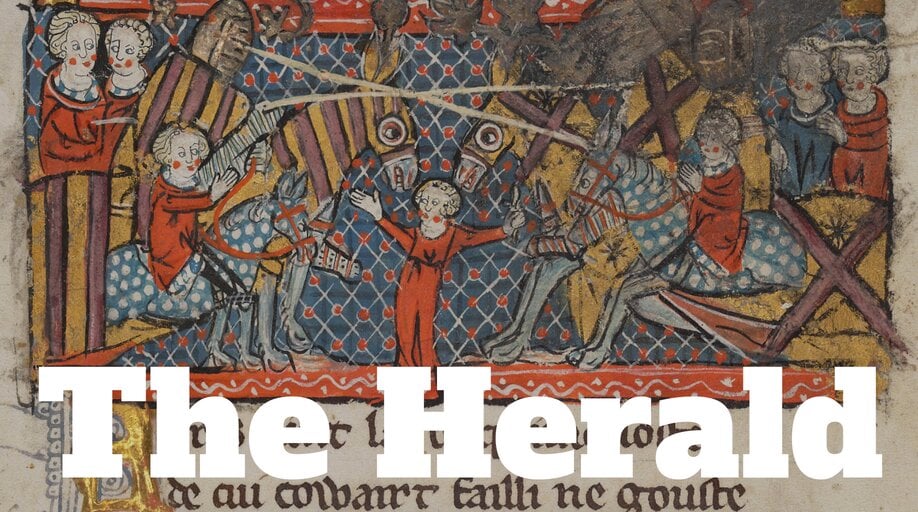 While the jousting was happening, the heralds were busy working the crowds and sometimes causing trouble.

Tournaments and other “Deeds of Arms” were an important aspect of the Middle Ages. The original purpose of tournaments was military training for horsemen, but as time went along they served as “theatres of chivalry” where men-at-arms demonstrated that they not only belonged to the equestrian ruling class but also to the courteous atmosphere that surrounded the great lords and ladies.

By the late 13th century tournaments in some parts of Europe had become huge celebrations with hundreds of competitors and many more spectators. And although melee tournaments remained the chief attraction there were many other activities – singing, dancing and feasting in particular – which ladies and other non-combatants also took part in. Great tournaments can be seen as high-level competitions where wealthy lords sought to demonstrate their predominance through generosity (the knightly virtue of largesse).

The best account of such an event is The Tournament at Chauvency, newly translated by Nigel Bryant.  The tourney took place in Lorraine in 1285 and a poem was written by Jacques Bretel, a writer of some reputation, to celebrate the successful event. Bretel drew a vivid picture of the tourney, telling the stories of important individuals – likely those who contributed to the poet’s upkeep – as well as those who were also on hand, such as ladies, visiting knights from Germany, and heralds.

Here I am going to talk about the heralds of northern France as Bretel saw them. They are an amusing bunch and seem to be not quite the establishment figures that we think of today. By “establishment” I mean the fact that heraldry is associated today with political power. The vast majority of national and provincial flags are in the style of medieval heraldry. Most every jurisdiction has heraldic symbolism associated with it. The few working heralds wear elaborate costumes when they perform an in-person function (as will be seen when the next Sovereign of the United Kingdom steps up).

Heralds at Chauvency are presented more as a gang of trouble makers and vagabonds than an an elite group.  A few passages show how the behavior of some heralds gave the rest a bad name:

Now you’d have seen shields riven, lances smashed and helmets dashed… heralds were squawking like a flock of crows – hungry for trinkets, not carrion.  Not even [the Biblical king] Herod, the embodiment of greed, was a hundredth part as grasping as a herald out to grab what he can…

[Two skillful jousters were reeling from the force of their blows.] The heralds were at it instantly: each of them grabbed a trumpet and started blasting. A curse on the lot of them: always on the take, giving not a thing, and full of lies and pomposity.

The accusation of pomposity came from an incident where Bretel offered an opinion on the identity of a competitor and was immediately rebuffed by a know-it-all herald:

The heralds were bawling, some in French and some in German, and I called out “Bazentin,” being sure that that was who it was.  [A herald said to Bretel] “Who taught you your heraldry, the Devil?”  [ Bretel:] “Shut your mouth, you leper! It’s ‘Bazentin,’ God damn you!  [Herald:] “You’re full of rubbish!”

He wanted to clobber me for calling him a leper! He’d have given me a smack in the mouth—I’d no kin to protect me! But I shifted fast into the throng!

Bretel characterizes one herald as “a sneering snake” because he scorned the enthusiasm of the spectators for near-deadly combat. Meanwhile, another herald rants at the crowd because they had encouraged a tremendous clash that seemed at first to leave both jousters dead:

A herald … came before the ladies; his eyes were full of tears, but through them he said: Look, ladies; see what these knights inflict upon themselves; for your sake they risk their lives and lands – they’re in danger of death! It’s all your fault, so help me God—all for the sake of winning your love, ladies! You should and with your smooth, white, delicate hands  stroke their brows and temples, wipe them with the fringes of your mantles and so soothe them. Their hauberks are soaked and their faces stained with sweat. And all for your love, ladies! To whom else can I appeal, the object of their devotion!  You should at least relieve their suffering and help them recover – those knights who truly, sincerely love you – with looks of gentle favour. It would inspire them to even greater valour.

Tourneys were controversial, and condemned by the pope and major monarchs, but this ranting herald is not condemning tourneys or their participants. Instead, the herald is upholding love as the motivator of worthy warriors, who are to be rewarded by ladies. He is insisting that ladies do their duty by rewarding the noble men appropriately.

The tournament at Chauvency is a community of people united in their appreciation of chivalric combat, and such courteous pastimes as singing, dancing and poetry. Heralds liked to think of themselves as important members of these chivalric gatherings, whose contribution was vital. One niche they occupied was that of making announcements:

A herald named Martin I believe, stood on high and called to the gathering: ‘my lords, I summon you all to the fields in the morning! So leave your singing now – the ladies are weary!’

Heralds were key members of a chivalric fandom. This fandom was held together by gossip and stories and reputation. Jousters ladies and heralds examined the competitors, and commented on their skill and their families’ status, jousting and tourneying being aristocratic games.

The stories that emerged from tourneys could make or break reputations. Some ladies were extremely well informed and were authorities in their own circle. Others who knew less would have no hesitation turning to a nearby herald for the information they wanted. Bretel records the crowd reaction when Conon and Perart de Grilly put in a great performance:

Their intense commitment earned them great acclaim that day. The heralds were off again, gassing on, each saying in support of his man: “He’s a born tourneyer! He gives as good as he gets! He’s a fine and handsome knight! He strives for honour tirelessly! The ladies should have their eyes on him: he’s courteous, charming, honest, a splendid wielder of the sword, and young and bright and brave and rich, and never mean or stingy.”  Such were the claims they made for these knights from Germany and Burgundy.

If many rowdy heralds must have been desperately looking for patrons to support them, some heralds had ‘made it.’ Bretel spent a good long time hanging around with the herald Bruiant (which means “Noisy” – a nickname of the sort perhaps used by later generations). Despite his rude name Bruiant was now an established figure. He knew many of the best knights in various countries, and he knew their heraldry. Bretel even complimented Bruiant on his ability to shout out loud and clear.

Bretel also praised an elderly herald knight called Malparlier (Slanderer!) for being well-schooled and well-spoken. Malparlier was using his talents to praise the Count of Flanders and the knights of Hainaut – “the home of fine knights.” He and Bretel hit it off immediately and swore friendship.

Bretel has a lot to say about the world of heralds, which inspires me to ask, was Bretel a herald?  If so, he doesn’t admit to it. Yet he shows himself as having many of the characteristics of the good heralds he portrays, and claims that important people recognize his worth.  Malparlier tells him that “knights, heralds, minstrels all speak well of you, as do I! I’ve been wanting to meet you.” We can’t be sure of Bretel’s status, but it is clear that he has won a spot in the exciting world of chivalric love.

You can read the full translation of Bretel’s account in The Tournaments at Le Hem and Chauvency, by Nigel Bryant and published by Boydell and Brewer – click here to visit the publisher’s website for more information.

Steven Muhlberger, before he retired from Nipissing University, studied and taught Late Antiquity, the history of democracy, Islamic history, and chivalry. His most recent scholarly works include The Chronicle of the Good Duke Louis II Bourbon published by Freelance Academy Press.