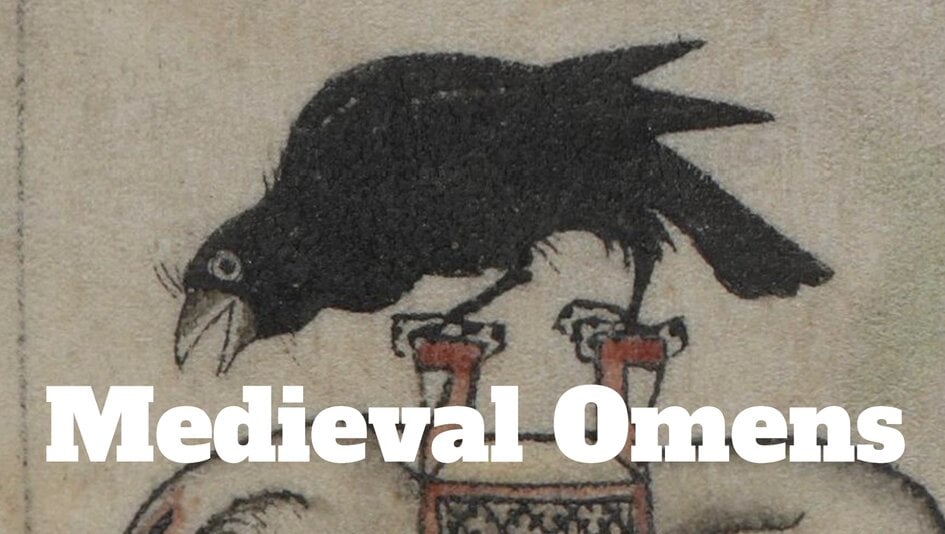 People in the Middle Ages read certain images and occurrences in the world as signs that foretold certain things. Many thought, for example, that if they encountered an ass on a journey, they would have ill luck. Others thought that if they heard thunder in January there was likely to be strong winds, abundant crops, and much bloodshed in the year to come. Omens were a staple of medieval superstition and a great reflection of medieval folk beliefs.

If you’re not familiar with the term (and we don’t use it all that much today), an omen, according to the OED is “an event or phenomenon regarded as a portent of good or evil.” An omen is something you see or hear that has a specific kind of meaning. Reading omens is a means of predicting the future, akin to fortune-telling. Basically, omens give whoever sees them some indication of what is going to happen. They tend to be vague, and they tend to operate on a good vs evil binary, but they give the viewer some insight into what the future might hold.

While they are a kind of fortune-telling, omens are a bit different from most other ways of predicting the future. They are different first because the person takes no action to make them happen or to find one. An omen is simply something someone comes across in their natural environment at random. Omens are different too because there is no learned or scholarly tradition behind them. Other means of fortune-telling, like astrology or augury, had huge bodies of scholarly knowledge dedicated to them in the Middle Ages. Omens did not. They were rooted in a set of folk superstitions and pseudo-magical beliefs and were not a part of any scholarly tradition that I am familiar with.

Omens are different too because they are incredibly individual and unique to a given time period and community. What counts as an omen and what any omen might mean varies significantly across different cultures, time periods, communities, and probably even families.

So what kind of omens did medieval people see and what did they think they meant?

It can be hard to trace omens in the medieval world because they belonged largely to an oral or folk tradition. That means they were not recorded as extensively as some of the more academic means of predicting the future. That said, we do have some records of what medieval people thought to be omens. Catherine Rider records a number of them in her book Magic and Religion in Medieval England as does Richard Kieckhefer in his Magic in the Middle Ages.

Here are a few examples:

The omens listed above are just a few examples of the many different omens that existed in the Middle Ages. As I said, we don’t have a complete picture of medieval omens because so many have been lost, but those listed above give you some idea of what omens circulated at the time.

The medieval church was actually fairly dismissive of omens. As early as the fifth century, Augustine had said that any connection between a so-called omen and good or ill fortune was pure coincidence. He took a mocking tone to those who believed in omens. This tone was repeated by later medieval theologians who often used stories of people believing in omens as warnings to their parishioners not to believe in these silly superstitions. The omen about the cock crow indicating how many years one has left to live, for example, was an exemplum that would have been used in sermons. In the full story, a woman hears a cock crow five times, and believes she has five years to live. So, when she falls ill shortly after that she does not receive the last rites. She then dies and goes directly to hell. The story was meant to show people the falsity of omens and the dangers of believing in them.

Some medieval theologians did see belief in omens as dangerous. Augustine had said that while believing in omens was mostly silly, it could be dangerous because demons could use the foolish superstitions of people to get them to sin. Some later medieval writers took the same approach and warned people away from believing in omens.

Despite all these warnings, people in the Middle Ages still believed in omens. The sheer number of warnings confirms that belief in omens remained strong throughout the medieval period. This is one instance (of many) where folk and superstitious beliefs were just too deeply ingrained for the church to effectively stamp out.

Some even survive to the present day.

Unlike many other medieval means of predicting the future (like astrology), reading omens has faded to some extent, but, not entirely. When I think of omens today, I am always reminded of the third book of the Harry Potter series, Harry Potter and the Prisoner of Azkaban, which sees Harry’s first foray into magical means of telling the future. One of the first things that catches his eye is a book all about omens and how to read the world to find your own impending doom. After he sees the book, he starts seeing omens everywhere. They turn out to be false, of course, and the book has the intelligent characters scoff at the idea that omens are real, but their treatment and presence in Harry Potter’s world shows that they are still meaningful to many today.

Indeed, despite all our scientific and technological knowledge, some omens still circulate.

I have never sailed in my life, but I know that a red sky at night is a “sailor’s delight” and a red sun in the morning is a “sailor’s warning.” In North America we celebrate Groundhog Day in February. And what is the act of watching a groundhog looking for his shadow to determine the end of winter if not an attempt to read an omen? Rabbits’ feet and horseshoes are still seen as lucky objects, and I remember looking through bags of chips for a “wish chip” (one that was folded in half) as a child.

While we know today, as they did in the Middle Ages, that omens are unlikely to actually be real, there is still (as there was then) some belief in the idea that certain aspects of our natural world can provide fortuitous or ominous signs. So, the next time you see a black cat cross your path, or avoid stepping on a crack (so as not to break your mother’s back), remember that superstitious beliefs have not really changed all that much.