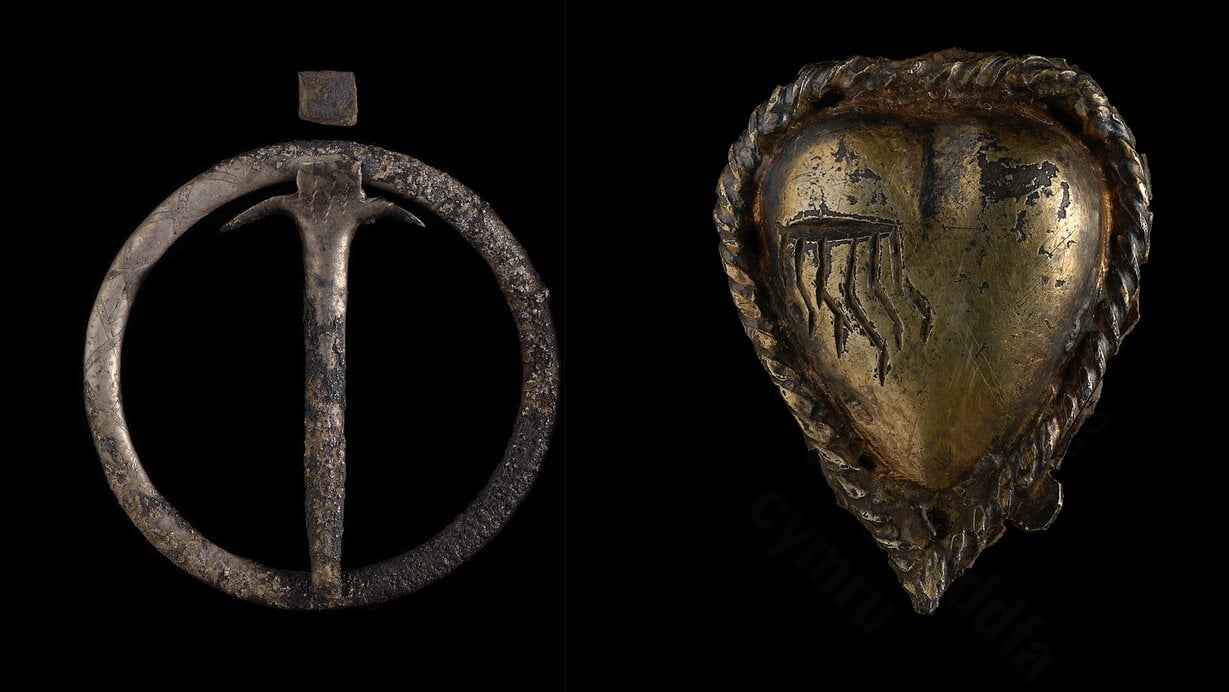 Several medieval items have recently been discovered by metal detectorists in Wales. They include rings and brooches which have now been declared national treasures.

The medieval items were declared treasures by Paul Bennett, Acting Senior Coroner for Pembrokeshire and Carmarthenshire, which is in southern Wales. Under the Portable Antiquities Scheme and the Treasure Act, historical items discovered within the United Kingdom must be reported to authorities. Some of the most important of these finds are declared national treasures, allowing for museums to purchase them.

Here are the items discovered and now declared treasure:

A thirteenth- or early fourteenth-century silver annular brooch, found by Lee Evans while metal-detecting on land under pasture in Cilgerran in 2021. The frame of the brooch is decorated with herringbone and transverse groove patterns, inlaid with niello – a black enamel-like material providing a colour contrast with the background silver of the brooch.

A medieval silver finger ring was found by Vaughan Thomas while metal-detecting in a field in St David’s and the Cathedral in 2018. The ring has a broad flattened band and a bezel in the form of a stylised flower with engraved design. The ring is likely to date from the thirteenth- to sixteenth centuries. Scolton Manor Museum has expressed an interest in acquiring this ring and the above-mentioned brooch for its collection.

A medieval silver ‘stirrup’ ring fragment found by Jake Webster in 2020 while metal detecting in Llawhaden. The ring dates to the twelfth or thirteenth century.

A medieval silver annular brooch, which was discovered by Rafal Pacholec while metal-detecting near Pontyberem in 2020. The frame of the brooch is decorated with fine bands of black niello (an alloy of different metals and sulphur), and the brooch has a pin in the shape of a dagger, with distinctive ‘stirrups’ to prevent cloth from catching when worn. Through comparison with other known examples, it has been dated to the thirteenth or fourteenth centuries.

A Tudor period silver-gilt pendant, which is heart-shaped and decorated with a bleeding wound design representing Christ’s wound. This personal ornament, a symbol of Catholic faith, dates to the mid-sixteeenth century.

The pendant was found by David Edwards while metal detecting in a field in Llangeler in late 2020. Dr Mark Redknap, Deputy Head of Archaeology Collections and Research at the National Museum Wales, says “While the Reformation has traditionally been seen as a time of the rupture of medieval society and order, with iconoclasm, defaced shrines and monasteries closed to become sites of salvage or conversion, archaeological finds such as the Llangeler pendant tell us about the individual continuities and responses to faith during this period. The pendant is closely paralleled by a similar find from Fishguard & Goodwick, Community, Pembrokeshire and could represent an affirmation of faith during the Marian period of Britain’s counter-Reformation.”