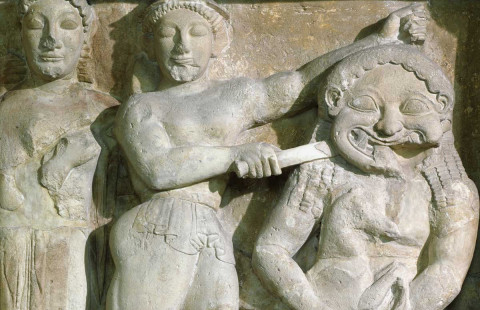 The Greek myth of Perseus decapitating Medusa is probably over 3,000 years old. Although Medusa is first mentioned in Greek literature in Homer’s Iliad and Odyssey, it is the fuller narrative, as told in Hesiod’s Theogony, that is portrayed in this limestone metope – a rectangular space that fits between two triglyphs in a Doric frieze – from a Greek temple at Selinous in Sicily, dated to c.560-540 BC.

Medusa was a beautiful, celibate priestess to the warrior god, Athena, daughter of Zeus. However, after Medusa fell in love with Zeus’ brother, Poseidon, Athena wrought vengeance by turning her into a hideous Gorgon, or monster, with green skin, venomous snakes for hair and an awful grimace, baring boars’ teeth. Medusa was also given the terrifying power to turn to stone any man who looked directly at her.

The sculptor of this metope provides us with a synoptic narrative, in which a sequence of events is compressed into a single image. Although largely Archaic in style, with the bodies and limbs of Perseus and Medusa shown in profile, and with Egyptian-style braided hair and exophthalmic eyes, all three figures look out, engaging the viewer. We become active participants in Medusa’s killing, taking on the role of Athena’s polished shield, into which Perseus sees the reflected image of Medusa, rendering it harmless. Perseus is shown in the act of decapitating Medusa, with Athena (on the left) guiding his sword with her hands. Already present in Medusa’s arms is the winged horse, Pegasus (sired by Poseidon), born from the blood that will soon gush from her neck. In its original state, the metope would have been brightly coloured, a striking image.

In 1975 the influential theorist Hélène Cixous published ‘The Laugh of Medusa’, a feminist reading of the myth in which the beheading of Medusa is seen as a violent act of misogyny, a silencing of the original femme fatale because her female gaze undermined male virility and authority. Cixous’ argument is a powerful call for women to speak out and ‘break out of the snare of silence’.