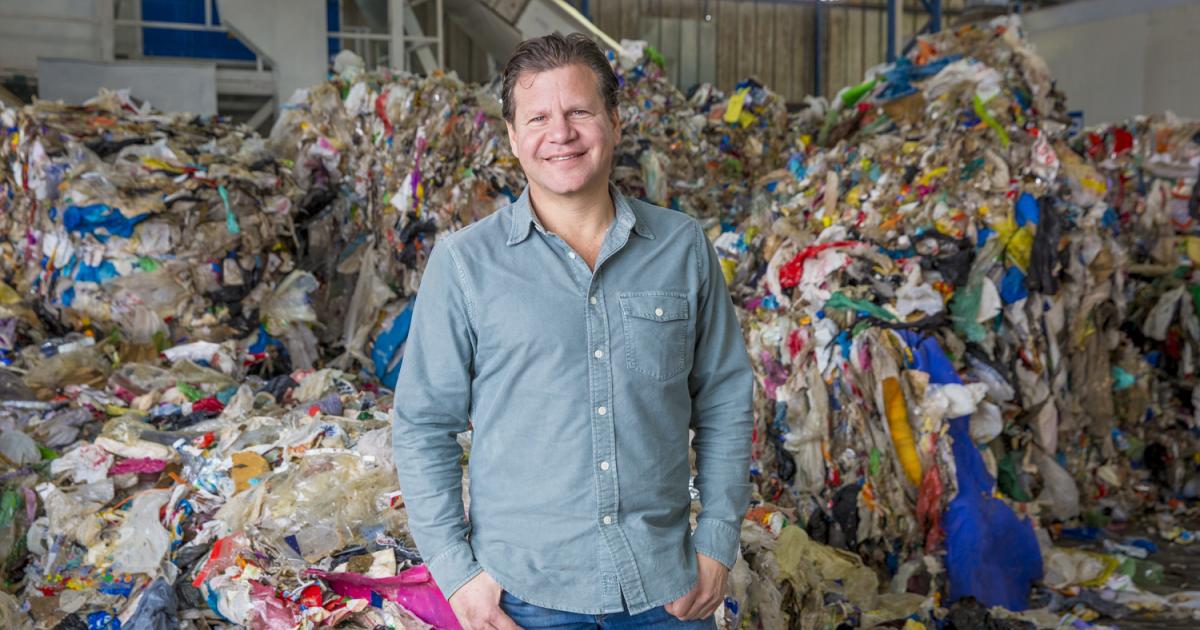 For about a decade now, Israel’s Environmental Protection Ministry has been working to improve the country’s recycling rates, in part by trying to educate and persuade the public to separate their trash and put it in the correct recycling bin.

These efforts have produced marginal results, but roughly 80 percent of the country’s municipal waste still ends up in landfills. Last year, those landfills nearly reached their approved capacities, prompting the ministry to write up an emergency expansion plan. To tackle Israel’s mounting garbage problem, the ministry has developed a strategy for reducing the total amount of waste sent to the dump to 20 percent by 2030. But the country faces the same uphill battle it always has, because the plan still depends on average people properly sorting their trash. And that just doesn’t happen enough.

Enter UBQ Materials, a Tel Aviv-based startup that converts household garbage into an alternative plastic material — with no sorting required.

UBQ diverts waste headed for Israel’s landfills to its plant in Kibbutz Tze’elim, about two hours south of Tel Aviv. There metals and glass are separated and sent to traditional recyclers, while UBQ turns the rest of the refuse — food scraps, mixed plastics, cardboard, paper, all of it — into little thermoplastic pellets that are sold to customers in a variety of industries, at a cost comparable to conventional fossil-fuel-based plastics. The material, which the company also calls UBQ, short for ubiquitous, is used to make everything from clothes hangers to fast food trays to automotive interiors.

Jack “Tato” Bigio co-founded the company in 2012, along with Yehuda Pearl, founder of hummus maker Sabra, and Rany Lev, a corporate lawyer who also happens to be a pilot for El Al Israel Airlines.

Our material is used in the same way as conventional plastics to create end-products, by basically all the industries that you can imagine.

Bigio grew up in Lima, on the Pacific Coast of his native Peru, and spent much of his free time as a kid swimming and playing in the ocean. After attending Colegio León Pinelo, Peru’s only Jewish school, he set off for college in Israel, earning an MBA from The Hebrew University of Jerusalem. He fell in love with the country and has lived there ever since, raising a family and building a career in business that took him to the top of Ampal-American Israel Corp., an investment holding company where he served as president and CEO for four years. Then, in 2006, his passion for the natural world drove him to impact entrepreneurship. He co-founded Merhav Renewable Energies, which he ran for three years before turning his attention to waste.

More than a decade later, UBQ Materials is entering a new phase: international expansion. The company completed its latest funding round in December, raising $170 million, the bulk of it from TPG Rise, the global impact investing division of private equity firm TPG. I spoke with Bigio, who serves as UBQ’s co-CEO, about the company’s processes, environmental impact, corporate partners and where it’s headed next. The following excerpt has been edited for length and clarity. To hear more of the interview, including more details about UBQ’s expansion plans and Bigio’s outlook on the future of the circular economy, tune into the next episode of the GreenBiz 350 podcast.

CJ Clouse: Can you explain the process the company uses to convert waste into plastic? You start by sorting out the metals and glass, correct?

Tato Bigio: Yes, these materials are valuable, especially the metals, and highly recyclable. And they don’t really give any advantage to our plastic material because they are too abrasive. So we take out as much as possible and deliver those to the recyclers, and that basically leaves us all the other stuff, the stuff that nobody wants, that would have ended up in landfill decomposing and emitting methane, and that’s what we convert into UBQ.

Clouse: And how exactly does that happen?

Bigio: First, just to explain, UBQ does not do recycling. The difference between conversion and recycling is that when you recycle, you turn plastic into plastic, cardboard into cardboard and paper into paper. But we’re taking all these materials, mixed together with the food residues and the garden trimmings, even the dirty diapers, and turning all of it into one homogeneous, consistent material. This is because, in general, organic material — like a potato, a cucumber, a banana peel or chicken or fish — at the particle level is composed of very similar building blocks. Once we break the organic material into particles, we have a common denominator that we use to bond the particles and build the matrix that has thermoplastic characteristics.

So, we are using a very advanced chemical process, but luckily the process is done at low temperatures, so we don’t burn any of these materials. We have a very clean and efficient process that uses low levels of energy. If you consider that we use heat of 200 degrees Centigrade, which is about 380 Fahrenheit, that is far less than the plastic industry uses to make polymers like polypropylene. For that, they use 800 to 1,200 Centigrade heat. We’re using one-sixth or one-fifth of that.

Clouse: And you use very little water as well, no? Since we’re talking about saving natural resources.

Bigio: Well, we don’t use any water in the process. It is quite remarkable because the process of making materials, cardboard or paper, or even in plastic recycling, uses tremendous amounts of water. And our process doesn’t need any.

Clouse: That’s amazing. And what about the material you produce, who is buying it? And can you give me a few examples of the types of products being made using UBQ?

Bigio: What we’re selling is these little pellets of UBQ material similar to the way that polypropylene, polyethylene and polystyrene plastics are sold in pellets to manufacturers. Our material is used in the same way as conventional plastics to create end-products, by basically all the industries that you can imagine. We’re in the automotive industry, and just to give examples here, one of the biggest automakers, Mercedes-Benz, is using UBQ material in quite a lot of plastic parts in its cars, and its future cars will include more and more UBQ material.

Then in the retail industry, we have a company called Mainetti that is the biggest maker of plastic hangers in the world. In the construction business, UBQ material is being used to make pipes, roofing, siding, floor panels; in logistics, they use it to make transportation pallets, boxes, beams, et cetera, then there’s also furniture. The only industry where we’re not yet selling is the food industry for contact applications, because we haven’t gone through an FDA approval process. It’s a lengthy process that we’re going to be doing later. But we can use UBQ with near-food contact applications. For example, the biggest licensee of McDonald’s in the world, Arcos Dorados in Latin America, they are making plastic trays using UBQ material and even branding the trays with UBQ in the corner. We’re extremely happy about that.

Clouse: And what percentage of these end-products is made with UBQ? If I were to buy a hanger or a Mercedes-Benz, how much of the dashboard in my Mercedes would be UBQ?

Bigio: The more, the better. You can find products made with 20 percent UBQ; you can find products made with 60 percent, which is the majority, by the way — the majority use more than 50 percent. And the more the industry adapts and adopts new materials, the more the industry also adapts its processes and its equipment. New materials like UBQ are typically tested in low amounts, then as the industry starts to shift, they are increased more and more. It will always take time for manufacturers to adapt, but the more they get acquainted and used to the material, the more they buy.

Clouse: So, if I’m understanding correctly, theoretically, you could make something 100 percent out of UBQ. It’s just industry standards and practices, processes, machinery and all of that need time to catch up.

Clouse: You’ve attracted quite a bit of attention from investors, including a recent $170 million funding round led by TPG Rise. From what I understand, you’re going to use that money to help finance an expansion. Tell me a little bit about those plans and where you’re going next.

Bigio: Yes, these funds will be used to expand the activities of UBQ internationally, both in terms of factories and in terms of personnel; we will of course need more employees for the factories and for all the supporting commercial activities. And the idea is to move as fast as possible. The first facility is being built in the south of the Netherlands. We expect to start operations in that plant in late 2022. And in parallel, we are moving forward with the development of new sites in other places in Europe and in the United States.

It will always take time for manufacturers to adapt, but the more they get acquainted and used to the material, the more they buy.

Clouse: Securing funding is always one of the biggest challenges that entrepreneurs face when they start a business. What has that experience been like for you?

Bigio: In the last year or two, there’s been a massive shift in consciousness about the importance of developing alternative materials, renewable energies and other clean technologies. And the financial world is shifting, as well, in the right direction. Now you see venture capital funds and equity funds that were typically very involved in the digital economy, artificial intelligence, software platforms and all of that, understanding that there is a big opportunity in the clean energy sector and in the alternative materials sector. You are seeing a lot of funding coming in.

Also, governments and NGOs are pushing the agenda and creating an environment where these alternative products will be better received. All of this is creating a very attractive opportunity for entrepreneurs to come into this arena and develop new materials, new processes and new technologies. The environment has really changed for the better. Ten years ago, when we established UBQ, it was truly different. There was some appetite for it, but it was difficult. Today, in my opinion, there’s ample room for entrepreneurs to enter this arena.