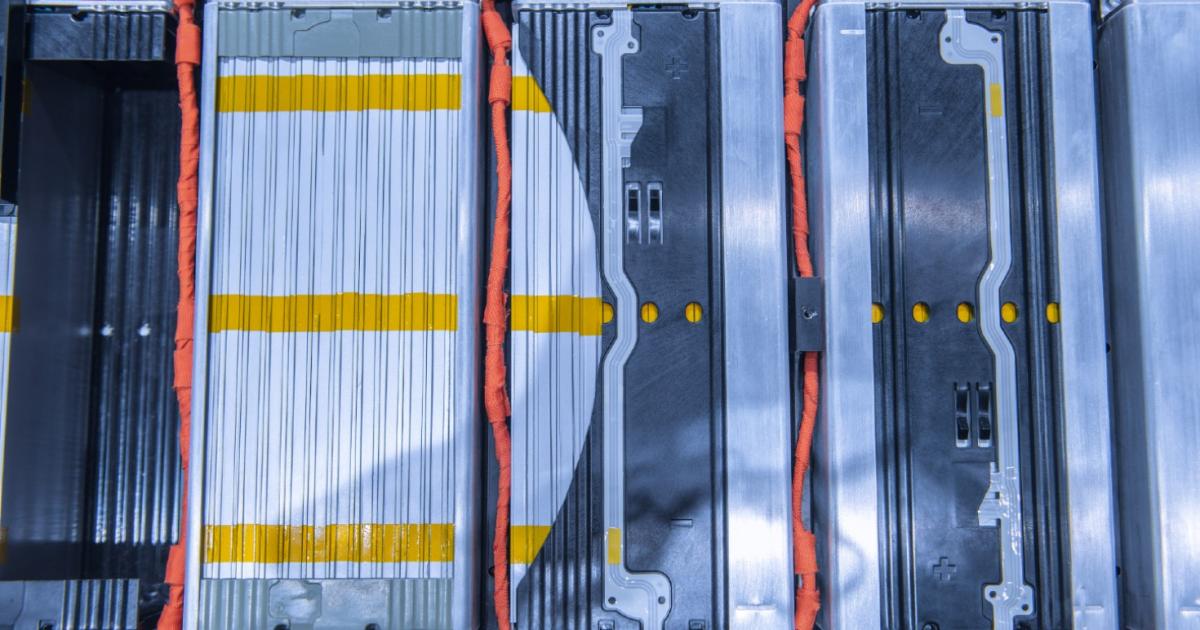 This story originally appeared in Corporate Knights and is republished here as part of Covering Climate Now, a global journalistic collaboration to strengthen coverage of the climate story.

There’s no shortage of evidence that the electric vehicle market hit some kind of inflection point in the last year or so. But for Ajay Kochhar, CEO and co-founder of Li-Cycle, the telling detail was buyer response to General Motors’ first e-Silverado. The initial production run sold out in 12 minutes the day it went up for sale in early January — and this is for a pickup that won’t roll off the assembly line until 2024. “Consumers,” as he says, “are speaking.”

And Kochhar is listening. Just four years after launching a small pilot plant in Kingston, Ontario, Li-Cycle has emerged as a formidable player in the nascent EV-battery recycling industry. Now publicly traded (LICY: NYSE), the company quickly raised more than $500 million from investors. Last year, it secured $150 million more in strategic infusions from global battery-maker LG Energy Solution, a partner in a newly announced $4.9-billion EV-battery plant in Windsor, Ontario, and Koch Strategic Platforms to build three large facilities in Alabama, Arizona and upstate New York. (While the oil and gas empire run by the Koch family has lobbied heavily against climate action, Koch companies have been investing in a number of renewable sector start-ups of late.)

With early-stage backing from Carnelian Energy Capital, a Houston venture fund, last spring the company also inked a deal with Ultium, the sprawling EV-battery joint venture established by GM and LG Chem, to set up a processing facility within a huge new Ohio battery-plant complex. The value of its planned capital investments is now almost half a billion dollars. As Li-Cycle has told investors, it expects to be recovering battery-grade materials from the equivalent of 60,000 tonnes of lithium-ion batteries annually by 2023.

Investors aren’t the only ones paying attention. In its national blueprint for lithium batteries for 2021 to 2030, the U.S. government puts a heavy strategic emphasis on recycling lithium-ion EV batteries, citing research showing that batteries that use recycled materials can cut costs by 40 percent, water consumption in the production process by 77 percent and energy use by 82 percent.

Not surprisingly, Li-Cycle’s sector is rapidly becoming a very crowded space, attracting China’s battery giant CATL (which claims to recycle enough lithium for 200,000 EVs per year), as well as huge investments by multinationals such as Nissan, BASF and Tesla, via Redwood Materials, a battery-recycling company founded by a Tesla co-founder. All this activity is being driven in part by the relative scarcity of both lithium and cobalt, another ingredient of lithium-ion batteries, as well as the car industry’s efforts to achieve carbon reduction targets. Meeting those targets pivots on transitioning to electric power but also on contending with the pollution and emissions associated with mountains of used batteries. “It’s a make-or-break moment for the OEMs [original equipment manufacturers],” says Kochhar. “They’re looking at recycling as a way to reach net-zero and have a domestic supply source instead of going to the ends of the earth.”

It’s a make-or-break moment. They’re looking at recycling as a way to reach net-zero and have a domestic supply source instead of going to the ends of the earth [for minerals].

Lithium, a metal found in abundance in Chile, Australia and China, has long been recognized for its ability to pack a lot of energy into relatively small volumes — hence its widespread use in consumer electronics. When Elon Musk began building EVs, he reckoned he could use lithium-ion batteries to power his vehicles, with modules consisting of stacks of the sorts of batteries used in laptops. Since the original Tesla debuted in 2006, demand for lithium has been climbing a steep growth curve. “In 2019 the installed capacity of lithium-ion batteries in the world exceeded 700 [gigawatt hours],” noted a 2021 life-cycle-analysis report prepared by Circular Energy Storage, a U.K. consultancy. “Of this 51 perent was installed in light or heavy duty electric vehicles. The same number in 2015 was 19 percent and in 2010 it was less than 1 percent.” Commodity prices for clean energy minerals have also soared, setting off something of a geopolitical sprint to secure access to both lithium and cobalt, the lion’s share of which is found in mines in the Republic of Congo. China has been busy snapping up global lithium resources (it recently acquired a Canadian lithium mine).

New mines often face heavy opposition (environmental protests in Serbia earlier this year over a proposed Rio Tinto lithium mine led to cancellation of the project). With surging EV demand over the next decade, the major challenge, according to a 2021 paper in Nature, will be scaling up the mining and production of lithium, which is itself an energy intensive process. And a bit further out, the accumulation of out-of-service batteries could begin to look like yet another geyser of post-consumer waste.

In short, the theoretical case for recycling seems obvious and important, not just for environmental reasons but to mitigate the geopolitical conflicts associated with lithium and cobalt mining.

However, EV battery recycling is a complicated proposition, for both electrochemical and logistical reasons. “This was a constant question for us,” says Kochhar, a chemical engineer who led a lithium study for a cleantech consulting arm of Hatch, the engineering giant, before co-founding Li-Cycle. “People would ask, what would happen with the used batteries?”

Unlike conventional car batteries, used EV batteries are not a uniform size, often weigh hundreds of kilograms and, in many cases, are integrated into a vehicle’s chassis or power train. While an EV battery may last more than a decade, the spent version still contains plenty of energy, enough to inflict serious harm on handlers. The first order of business for recyclers, therefore, is to drain the residual power, which can be done in various ways, including submerging them in an electrolyte, as Li-Cycle does. Recyclers then need to remove the plastic casing and reprocess the battery’s exposed innards, including the metals they’re made of: lithium; cobalt; nickel; and other elements.

There are various techniques: exposing this material to extremely high heat or, as Li-Cycle does, “shredding” it into what’s known as a “black mass” — a confection of metallic crumbs that can be separated into its component metals and used as feedstock to make new batteries. But before any of this can occur, recycling firms need to secure supplies of used EV batteries. Although that process may be more straightforward than has been the case with consumer electronics, which often don’t end up in a recycling stream at all.

This is reverse logistics. You don’t want to be transporting these massive batteries cross-country.

Li-Cycle’s secret sauce, which appears to have attracted investor attention, has more to do with the logistics of recycling heavy car batteries than with the electrochemical processes involved. The company opted to parse the whole process into what it calls a “spoke and hub” model. Some of the company’s plants — the “spokes” — will collect, drain and mechanically shred spent batteries, with the valuable residue — the black mass — shipped to a large centralized metallurgical facility in Rochester, New York, where that material is separated back into its component metals. These will then be sold back to the battery manufacturers or carmakers.

“This is reverse logistics,” Kochhar explains. “You don’t want to be transporting these massive batteries cross-country. It’s going to cost a lot, won’t be safe, and our customers like LG and GM — they won’t do that, right? That’s where our spoke comes in.”

This approach, he adds, has been designed to minimize emissions — a lot less shipping, no burning, and reclaiming the scrap generated by the shredding process. The company’s strategy is to construct 20 spoke plants and four hub facilities worldwide over the next three years. Li-Cycle also claims that its process generates 25 to 30 percent less life-cycle carbon than other battery recycling techniques.

For all of Li-Cycle’s bullishness about its future, there are still many tough questions hovering over this piece of the EV revolution. Among them: will recycling provide enough lithium and cobalt to meet future demand, or whether reprocessing aging EV batteries is better for the planet than other uses for the residual power in these objects, such as stationary energy-storage applications such as back-up power instead of diesel generators.

Finally, we need to ask what role public policy plays in this story. The European Union will phase in tough recycling requirements by 2030. The Biden administration, as part of its lithium battery blueprint, calls for incentives to achieve 90 percent recycling for consumer electronics, EVs and grid storage batteries by 2030, as well as federal requirements to ensure that recycled metals are in fact used to make new ones. (Clean Energy Canada, a Simon Fraser University think tank, has called for a similar policy framework for an EV-battery supply chain that, to date, does not exist).

Kochhar, for his part, wants Li-Cycle to be driven by market forces and not subsidies. Which is fair enough, but it’s difficult to argue that public policy shouldn’t play some role in ensuring that these heavy, chemically volatile objects stay out of landfills — the final destination of countless numbers of smartphone batteries.

“How do you get those materials back from consumers?” he says. “That’s a big challenge.”