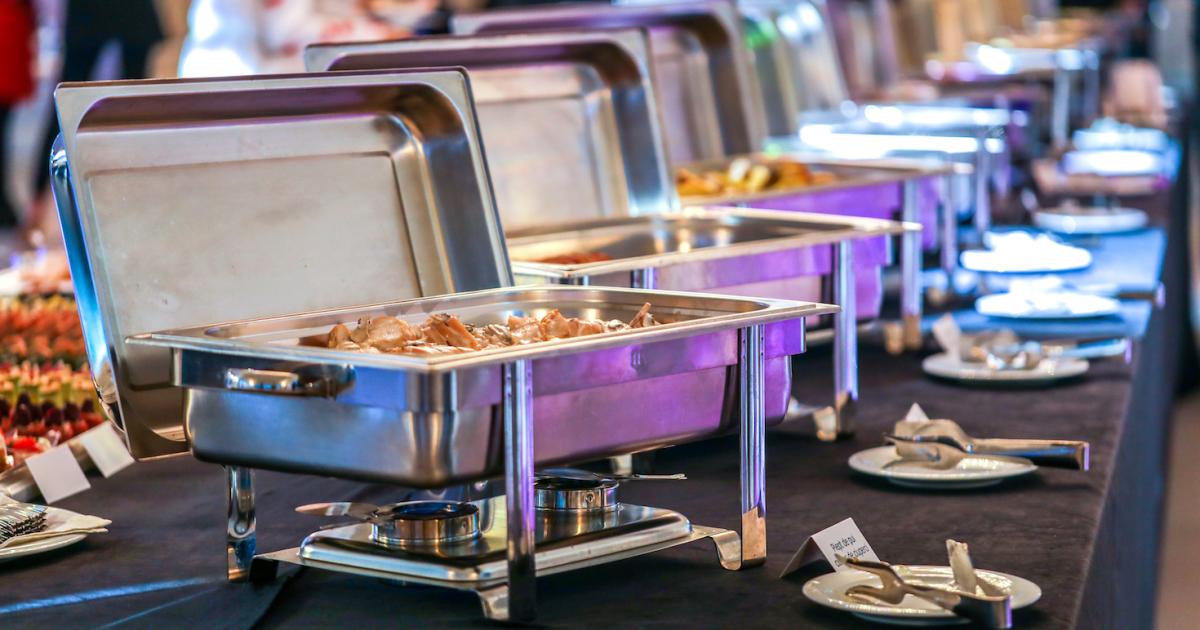 This article was originally published as part of our Food Weekly Newsletter.

Even though I wasn’t able to attend COP26 myself, I wanted to see if the biggest conference on climate was walking the talk, or in my case, baking the beans. The lack of sustainable menus at COP has long been criticized and yet the U.N. has been lacking satisfactory response.

The conference serves up to 40,000 people for two weeks. Beyond the immense direct impact, it’s been missing an opportunity to signal the importance of food emissions to the world’s climate leaders and familiarize them with climate-friendly menus.

This year was different. For the first time, a sustainable food strategy was developed and implemented for the conference — a big step in the right direction. But did it go far enough?

There has been a lot of criticism on Twitter and elsewhere focusing on the proportions of meat and other animal products served, but I haven’t seen a more holistic assessment of the strategy. I also wanted to hear the perspective of the conference’s organizers and evaluate their actual sales, not just the menu design.

So I spoke with Ian Weller, chief events officer at COP26 who directed the conference’s sustainability strategy at large, and Kevin Watson, business director at Levy UK, the event’s catering company. Let’s take a look at each of the five key elements of the event’s food strategy, how it was implemented and how future conferences can take it a step further.

The strategy: Designing the menus around Scotland’s seasonal calendar was the key theme Weller and Watson decided to focus on when they started out two years ago — despite the region’s limited produce offerings in winter. The local and seasonal focus was supposed to lower the carbon footprint of the menu and highlight British producers.

The execution: Levy sourced 80 percent of the food served from within 100 miles of the event venue and 15 percent from within the U.K. This included Scottish barley cooked as risotto and seaweed adding umami flavor to plant-based dishes.

Possible improvements: It’s hard to do much better at local sourcing but the bigger question is whether that should be the primary goal. Local sourcing for a global event like this is a stellar way of spreading benefits to the local economy and including local producers in the climate movement.

But when targeting the carbon footprint, eating local doesn’t help much as transport generally makes up for a very small share of food emissions. Only when it comes to fresh fruit and vegetables, seasonal and local choices can reduce emissions if they avoid production in heated greenhouses and air freight.

So while this strategy has some benefits, it should be used with further nuance, allowing more consideration to what is eaten, not only how and where it is produced. Case in point: I did some math with the menus’ carbon labels and found that the beef dishes’ footprint was about five times higher than the average meal served, even though the meat was locally sourced.

The strategy: Acknowledging the importance of plant-based foods to lower carbon emissions, the organizers included many vegan and vegetarian options and reduced the meat serving size in other dishes.

The execution: Overall, 43 percent of dishes offered were vegan and 16 percent vegetarian, while 16 percent contained red meat, 15 percent poultry and 9 percent fish. Watson told me that even for the dishes with meat, they “actively reduced the amount of meat proteins in the recipe and replaced it with more vegetables.”

Consider the beef burger. According to Watson, Levy’s standard burger patty contains 190g of red meat, which was reduced to 100g at COP26 and replaced with a mix of spelt, barley and kale. This curbed the burger’s carbon footprint by 35 percent.

Possible improvements: My calculations show that on average, the carbon footprint of vegan dishes was three times lower than that of other dishes served at COP26. When asked why they didn’t offer more plant-based options this year, Watson told me they had to build accessibility and affordability into the menus to cater to the cultural preferences of attendees from over 160 nations. A roughly 60-40 spread of vegan to meat and dairy meals seemed balanced and was approved by the U.N. committee.

80% of the food served was sourced from within 100 miles of the event venue and 15% from within the U.K.

I understand these constraints and know from my own experience serving on committees at the U.N. Food Systems Summit how hard it can be to agree on such issues. Still, I have yet to hear a credible explanation of how someone’s cultural or dietary requirements demand eating red meat at a climate conference. Given the stark benefits, I hope that the proportions will eventually shift. The conference almost got there in 2019, when Chile was ready to serve 65 to 70 percent plant-based meals at COP25, before it was relocated to Spain.

The strategy: The organizers added carbon labels to each dish to educate attendees about the impact of different foods and nudge them toward choosing the lower-carbon options.

The execution: Dishes were labeled as low (0.1-0.5kg CO2e), medium (0.6-1.5kg CO2e) or high (1.6kg and above CO2e) carbon. The menus also included a note informing attendees that according to WWF, the average carbon footprint of meals in the U.K. should be reduced from 1.7 to below 0.5 kg CO2e to reach Paris goals.

Possible improvements: This approach can be impactful in educating consumers and serving as a conversation starter. I’m less convinced that it successfully nudges people toward better choices. The sales data Watson shared with me hint at that: Of the dishes actually sold at the conference, 38 percent were vegan, 22 percent vegetarian, 14 percent contained red meat, 14 percent fish and 11 percent poultry. When looking at the dishes ordered compared to their carbon footprint label, there isn’t a discernible trend of consumers ordering dishes with low carbon labels. But without a control group, we can’t know for sure what effect the labels had.

However, successful nudging strategies have been explored in a wealth of behavioral science studies. The results show that the most impactful way of nudging people toward sustainable food choices is to list plant-based options as the default option and give attendees a choice to add meat. Other effective strategies include listing vegan and vegetarian options first or last on a menu and pointing out their flavor attributes rather than prominently labeling them as vegan or vegetarian. These strategies haven’t been applied at COP26 in a consistent way.

The strategy: Wasted food is another major climate issue. To get ahead of this problem, Levy counted on recipes that use vegetables in their entirety, redistributed surplus food and installed composting for scraps.

The execution: According to Watson, the event was able to limit food waste to under 1 percent. A dish with cauliflower is a good illustration of their efforts. While the florets were served as wings, the cauliflower’s stalk was shredded and served as a side salad. Another strategy that avoided food waste was to distribute the day’s leftovers to event staffers and volunteers.

Possible improvements: Cutting food waste down to less than 1 percent is impressive and can’t be improved on much. Great work on this end.

The strategy: By distributing reusable bottles to attendees and equipping the event venue with water dispensers, the event was able to get by without single-use water bottles. Levy also deployed reusable cups for hot drinks.

The execution: While it took attendees a few days to get used to the cup reuse system, it eventually became a popular feature at the conference, saving about 250,000 cups from going to landfills. Water dispensers also worked out well.

Possible improvements: It’s encouraging to see this reusable system work out at such a large event. I’d love to see an expansion to plates and cutlery at COP27 in Egypt. Yet, as for many things, the reusability devil lies in the details. Their superiority over single-use items depends on how often they get reused. In Levy’s case, the good news is that the caterer will use the cups at other events before their return to Corretto, the Belgian company manufacturing and eventually recycling them. An even better way of moving away from single-use could be to encourage attendees to bring their own reusable bottles and cups, assuming they would reuse them more frequently than the catering company.

Even though the Glasgow strategy may not have been flawless, it provides more cause for appreciation than criticism. If every COP (and other events, for that matter) achieved as much improvement from their predecessor as this one has, it would amount to a huge leap for sustainable catering.

Have you noticed these efforts while attending COP26 or know of other successful strategies? Tell me about your experience. I’m at [email protected]. For now, I’ll leave you with the five stories and opportunities that caught my attention this past week.