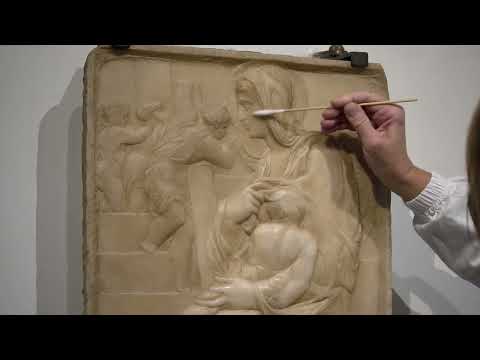 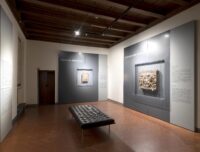 Michelangelo’s first two sculptures, marble reliefs the  Madonna of the Steps and the Battle of the Centaurs carved when he was a teenager, have been restored and are on display at the Casa Buonarotti museum in Florence.

Michelangelo was just 15 years old when he moved to Florence in 1490 and joined the informal art academy sponsored by Lorenzo de’ Medici in his sculpture garden at Piazza San Marco in Florence. For two years, Michelangelo lived in the Medici Palace and studied in Lorenzo’s garden of antiquities under the guidance of Bertoldo di Giovanni, the sculptor and portrait medallist who was curator of Lorenzo’s antiquities and instructor of the young talents who studied there.

Michelangelo’s first sculpture (1490-1491) was the Madonna of the Steps, a low relief homage to Donatello’s relievo stiacciato (smashed relief) technique. The Madonna sits on a square stone block, the Christ child on her lap, his back to the viewer. On the left is the flight of stairs that gives the piece its name. At the top of the stairs a pair of putti wrestle while a third one looks away, leaning pensively over the bannister.

His second sculpture (1491-1492) was another relief, this one a dynamic, intricate, deeply-cut mythological scene of a battle between men and centaurs. Michelangelo took inspiration from Bertoldo’s largest bronze, a relief of a complex battle scene inspired by an ancient Roman sarcophagus that Lorenzo had commissioned a decade earlier.

Michelangelo kept both reliefs for his entire life. He considered the Battle of the Centaurs one of his greatest works, evidence that he should have stuck to sculpture from the beginning instead of getting sidetracked by annoying distractions like, oh, say, the ceiling of the Sistine Chapel. After his death in 1564, the Madonna was sold to Cosimo I de’ Medici by Michelangelo’s nephew and heir (under some duress). Grand Duke Cosimo II returned it to the Buonarroti family in 1616. The Battle of the Centaurs has been in the Buonarroti family for five unbroken centuries. Both reliefs are part of the permanent collection of the Buonarroti House.

In 2020, the museum embarked on a new conservation project for the two works. Non-invasive imagine techniques were used to assess condition and plan the subsequent interventions.

After twenty-five and thirty years respectively after the restorations carried out on the works, the new cleaning intervention was functional to remove the subtle stratifications of atmospheric deposits of a coherent and incoherent nature that opacified and chromatically altered the reliefs. In fact, the color of the marble, changed due to the alteration and penetration of the materials used during the nineteenth-century calculations (waxes, oils, soaps) and of the restoration materials (waxes and solvents such as the slightly amber-colored turpentine used in the case of the Battle of the Centaurs for example) has reached a balance which, after the current cleaning operation, allows the high relief to be read in its technical sculptural data in a clear and harmonious way.

The cleaning to which the works were subjected gave such results as to make the pre-existing setting no longer suitable for their best enhancement, which saw the reliefs on a light background that mortified the color and the modeling of the two marbles. In the new layout, anthracite-colored painted metal structures have been designed that make the two reliefs stand out. The story of both works is entrusted to a short, very comprehensive text on the history of collecting and art, written in anthracite-colored characters on a light gray background in both Italian and English. Furthermore, the new LED lighting allows the sculptures to be read in every detail.

Michelangelo’s two earliest masterpieces are now the in the refurbished Room of Marbles of the Casa Buonarroti.

Video of the Madonna of the Steps undergoing conservation:

Video of the Battle of the Centaurs undergoing conservation: