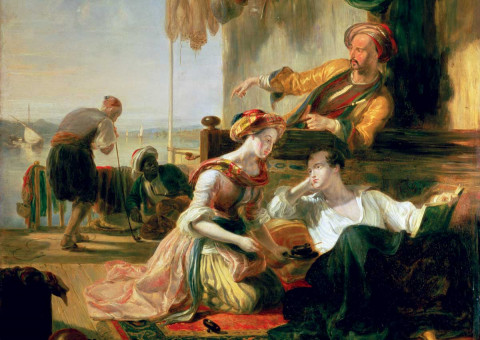 The 18th century was one of phenomenal change. Revolution sent shockwaves across Europe and America, while expanding global trade networks ushered in a new consumer age, one underpinned by the international trade in enslaved Africans and the brutal structures of empire. In Britain, the Acts of Union in 1707 gave birth to a supposedly united kingdom, although in reality local identities and centuries’ deep tensions boiled over into violence. Today we understand it as an age of so-called Enlightenment, in which science, art, music, literature, politics and more all underwent enormous development. But how did those living in Britain see themselves? This question is at the heart of Penelope J. Corfield’s rigorous and eminently readable new book.

Although Corfield applies the moniker of ‘Georgians’ to those who lived and died in 18th-century Britain (so called for the Hanoverian kings George I, II and III, who held the throne throughout), she does so with cautious nuance, comparing our own assumptions about this period with the models of self-identification used by those who inhabited it. A complex, highly political and shifting world emerges. While we might consider the Georgian era as having offered the first glimpse of recognisable modernity, for those living through – and driving – the colossal changes that took place during it, just where to locate themselves in time and space proved a point of dispute. The movement of people, goods and ideas (aided by a voracious print culture) meant the emergence of new geographies both real and imagined. Luxury goods flooding the newly established shops gestured to global and transoceanic trade while, through reading, Britons were ‘able to journey mentally up and down the centuries’ via popular history books, or to dramatic landscapes and picturesque ruins through the writings of travellers. There was, Corfield reveals, no fixed centre to this expanding universe. The Georgian era existed in the private mind of the individual as much as in the public realm and, as such, the past and the future were all to play for. Even today, historians struggle to pin down the parameters of this period. Corfield discusses the concept of the ‘long’ 18th century, whose start and end dates are, even now, hotly debated and which she estimates roughly as running from 1680 to 1840.

Much like the era it explores, The Georgians is packed with material and intellectual variety, all given life through a host of diverse contemporary voices. Corfield is a giant in the field of 18th-century history and readers are led deftly by an expert whose knowledge is brought into panoramic and colourful view. Across the book’s five sections the prose runs seamlessly from the stately politics of the royal courts to the daily lives of those who walked Britain’s streets, worked its fields, navigated its roads and printed and read the words of its inhabitants.

The 18th century was, Corfield shows us, an age of tension and even paradox. Many were moved to action by the optimism about new discoveries, growing wealth and evolving cultural pursuits. Conveyed across the book is the extraordinary energy of the time. While some resisted change, many embraced the buzzing vibrancy of metropolitan centres and newly established institutions. As a caption to one of the illustrations sets out, this was an age of ‘news, views and gossip, fuelled by word-of-mouth, newspapers and caffeine’. Others had more pessimistic perspectives, grumbling at innovation and fleeing the rapidly expanding urban populations. As one Sussex shopkeeper wrote in 1758: ‘Oh what a continuing proof is this of the predominancy of vice and wickedness in this irreligious age.’

Beyond her vivid account of the colourful details of everyday Georgian life, Corfield is keen to stress the effects and legacies of this world that still abound today. Among them, she notes, are the deeds (and, as the book’s subtitle suggests, misdeeds) of those who lived in it, nowadays commemorated through anniversaries and their accompanying rituals. For example, we continue to celebrate Burns Night after the Scottish poet Robert Burns. In Chicago, the Sarah Siddons Award has been given out since 1952 to the best performer on the stage, named in honour of one of the brightest theatrical stars of the 18th-century London playhouse. The Bosporus Cross-Continental Swim, organised by the Turkish Olympic Committee, is held annually in memory of Lord Byron’s crossing of the Hellespont in 1810. This line of inheritance from the 18th century to our own time runs throughout the book. At the end of each chapter, a recurring section called ‘Time-Shift: Then and Now’ shows how many of the Georgians’ artefacts, ballads, artworks, buildings, prisons, legal practices, workers’ unions, poems, novels, characters and prejudices endure today.

Corfield’s masterful handling of complexity and nuance reveals the 18th century – traditionally neglected in national school curricula – to be a crucial period in British history. Throughout, she shows how the past continued to cast a shadow while a bright, though sometimes uncertain, future beckoned. For those living through this time, the distance between tradition and progress, pessimism and optimism, was key to how they perceived themselves and the fast-changing environment around them. More than this, Corfield makes an utterly compelling case for the legacies of the Georgians and their impact today, many of which survive in the fabric of our culture – for better and for worse.

Madeleine Pelling is an art historian specialising in 18th-century Britain and Associate Lecturer in the history of art at the University of York.