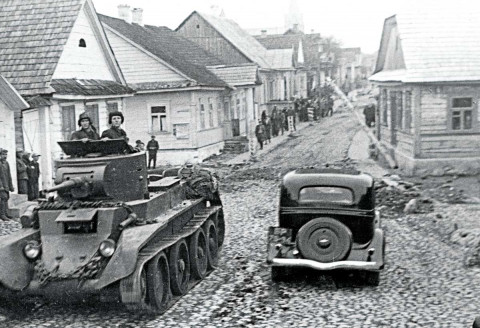 The overwhelming support for Ukrainian refugees in Poland suggests that the two nations have overcome decades of mutual hatred which had allowed Russia to divide and rule the region.

The Second World War brought widespread ethnic violence to the Ukrainian-Polish borderlands. The Nazi-Soviet partition of Poland in 1939 and the German attack on the USSR in 1941 paved the way to the annihilation of the Jewish population and mass starvation of the Slavic population of Ukraine. The dismantling of the Polish state, which had pursued aggressive assimilationist policies towards its Ukrainian minority in the 1930s, also led to mass ethnic cleansing campaigns. Far-right Ukrainian militants slaughtered tens of thousands of Poles; Polish partisans murdered several thousand Ukrainians in response. After 1945, to crush resistance, Stalinist leaders deported Poles from western Ukraine and removed Ukrainians from eastern Poland. Hitler and Stalin destroyed multi-ethnic borderlands in the name of control and order.

Postwar leaders of communist Eastern Europe sustained Ukrainian-Polish divisions. Just as Putin insists that Ukraine must remain in the Russian sphere of influence, Stalin’s successors in the Kremlin were concerned that Ukraine’s proximity to the Soviet border might pull it too far from Moscow. They mobilised history to suggest that Russia had always protected Ukraine against Poland. They also relied on crude xenophobic stereotypes to isolate Ukrainians from ‘harmful’ foreign influences. As activists of the Polish opposition movement Solidarity smuggled pamphlets to west Ukraine in the 1980s, locals attended carefully orchestrated public meetings where they spoke of the ‘idiot Poles’, a ‘race of hooligans’. Polish tourists added fuel to the flames as they reminded local inhabitants that Lviv (or Lwów) had been a Polish city.

Ukrainians encountered hostility or indifference on the Polish side of the border. During the post-Stalinist thaw, Soviet Ukrainian publishing houses released more translations from Polish than from any other language outside the USSR, but not a single translation from Ukrainian to Polish came out in the first couple of years after Nikita Khrushchev’s ‘Secret Speech’ denouncing Stalin in 1956. Warsaw was reluctant to pursue close cultural collaboration with Kyiv. In 1960, as the Soviet press launched a campaign against ‘anti-Soviet’ nationalism, the Polish ambassador to Moscow warned against fostering ties between Poland and Soviet Ukraine without the explicit approval of the Kremlin.

Moscow continues to rely on xenophobia in its expansionist policy. According to the former Polish foreign minister, Radosław Sikorski, Putin tried to convince Polish leaders that Ukraine was an ‘artificial’ state as far back as 2008, floating the idea that Warsaw could reclaim what used to be eastern Poland and is now western Ukraine. Russian media today still wield fears of Poland to justify the war in Ukraine. In March 2022 Pravda.ru compared Poland to a hyena, ready to feast on the corpse of Ukraine.

But recent history shows that Ukrainians and Poles have resisted Russian attempts to revive old animosities.

Albeit closely monitored, cross-border contacts between the USSR and Poland resumed after the death of Stalin. Poland remained a Soviet satellite state, but its leaders relaxed censorship and embarked on a ‘national path to socialism’. For Ukrainian historians and writers, Poland provided opportunities to tackle topics which remained taboo in the USSR itself. The magazine Przyjaźń (Friendship), published in Poland but available in Soviet Ukraine, featured articles about Stalinist repressions of the Ukrainian intelligentsia. Polish publishing houses cooperated with Ukrainian intellectuals who faced repression at home. The poet Lina Kostenko, who pushed the limits of permissible expression in Soviet Ukraine during the 1960s, continued to publish her works in Poland during the more repressive Brezhnev era.

The same regions that are seeing an influx of refugees today were the site of some of the most successful attempts to build bridges between European neighbours. In the provincial parts of western Ukraine and eastern Poland, factory managers and teachers established cross-border contacts to improve the local economy and education. So-called ‘borderland exchanges’, during which Poles and Ukrainians staged plays and concerts in each other’s towns, helped revive the cultural life of otherwise neglected provinces of the Soviet empire.

Travel also bred dissent. People crossing from Poland to Ukraine smuggled illegal publications that touched on such topics as Russification and human rights abuses. Communist-era Polish dissidents recognised Ukraine’s sovereignty in formerly Polish-ruled territories, supported the notion of Ukrainian independence and stressed that the future Polish-Ukrainian border ought to be easy to cross. Polish foreign policy, based on ideas developed by 20th-century dissidents, has remained steadfast in rejecting any claims on Ukrainian territory.

The European idea has brought Ukrainians and Poles closer. A vibrant civil society developed in Ukraine in the 21st century, based on an idealised view of European democracy and prosperity, but also memories of the very real abuses of power in the former USSR. Since 2014 Ukraine has forged close social, cultural, economic and political ties with its European Union neighbours. Before February 2022 well over a million Ukrainian citizens lived and worked in Poland. The Ukrainian armed struggle to remain in Europe and the arrival of refugees has now mobilised Polish civil society on an unprecedented scale.

Putin harks back to a political system based on ethnic divisions, but his invasion has only made it more difficult to imagine the future of the European community without Ukraine.

Zbigniew Wojnowski is Senior Lecturer in History at the University of Roehampton.