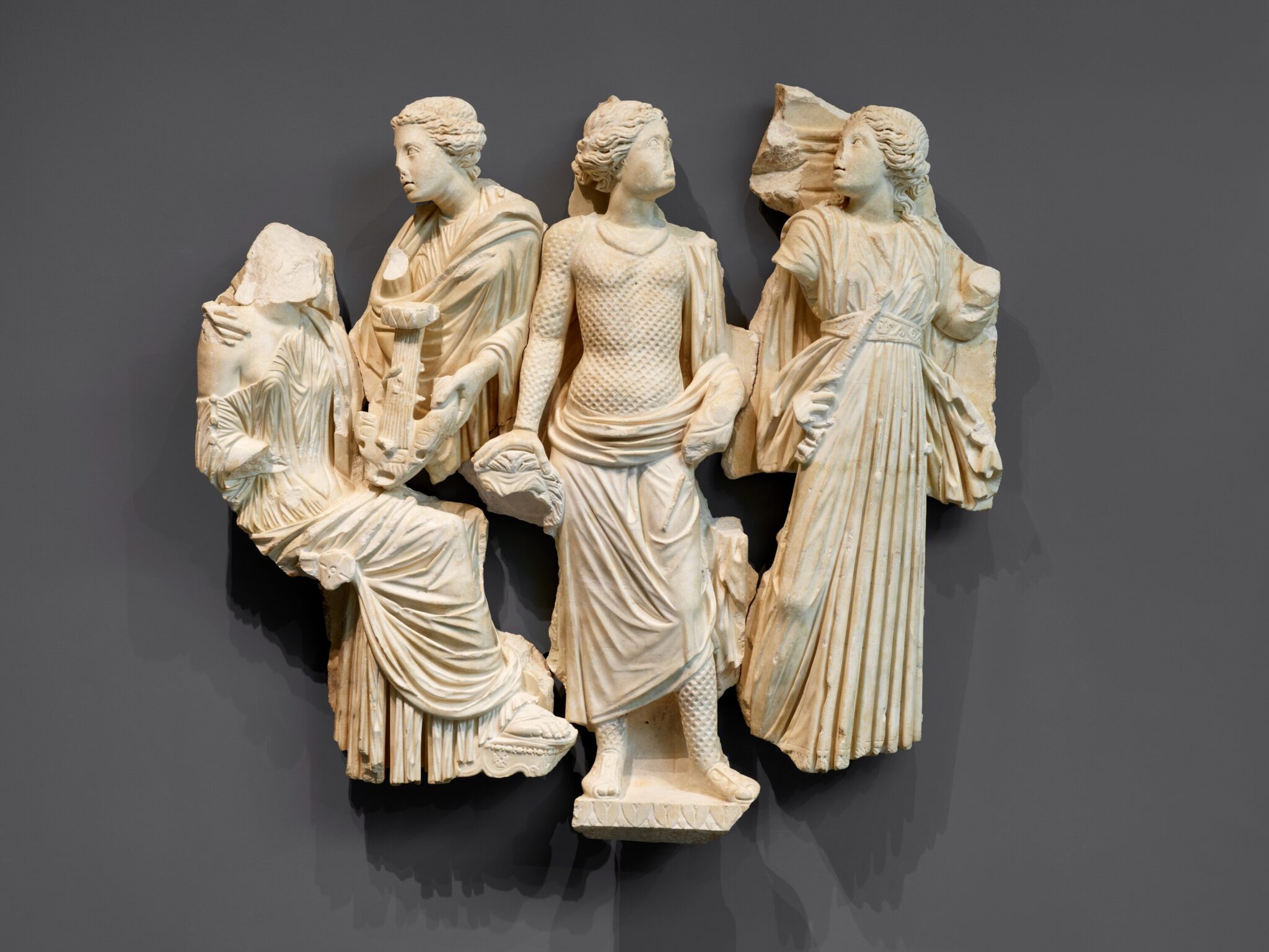 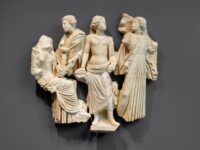 The J. Paul Getty Museum has created a fascinating online exhibit about the challenging conservation of group of reliefs from a lost Roman sarcophagus. Muses in the Lab: Conserving a Roman Sarcophagus on Google Arts & Culture is an easily scrollable, annotated and illustrated play-by-play of the conservation of a fragmentary high relief from a large sarcophagus the features a woman seated next to three standing muses.

The seated woman was likely the deceased. Facing her is Terpsichore, muse of dancing and choral song holding a lyre. Beside her in the center of the composition is Thalia, muse of comedy, holding the top of a comic mask. She wears a netted catsuit similar to ones seen in sculpture of comedic actors in costume. On the right is Euterpe, muse of music and lyric poetry, holding her double-pipes in both hands.

A second group of fragments from this sarcophagus are from the right front corner. Melpomene, muse of tragedy, stands in front of a draped curtain holding a tragic mask. The right end of the sarcophagus is attached to this fragment. It features a low relief of a beaded man holding a book roll. There’s also a bundle of book rolls at his feet, suggesting he may be a representation of a writer, likely a tragic poet given his location next to Melpomene.

The main group is 54 inches high by 88 inches wide and would have been the central scene in the front of a massive sarcophagus.  Its style dates it to the mid-3rd century A.D. The Getty acquired it from a New York art dealer in 1972. They knew nothing of his history before that and there is still no information about its origin. Both front the front scene and the right corner were on display together from 1974 until the 1980s when they were taken down and put in storage.

Conservators revisited the reliefs in 2018 as part of the reinstallation of the museum’s antiquities collection. They found that the quality of the carving was exceptional, almost entirely in the round and every single surface, even the ones in the background behind the figures, is polished and shaped. The marble sculpting is so extraordinary that conservators believe it was done in Rome itself. If that is true, it would be the largest sarcophagus of its type known to have been produced in Rome.

Unfortunately, the fragments had not fared well in storage. They were in poor condition, with cracked, discolored joins from all kinds of different materials applied in past restorations. The pinning methods used to hold the reliefs together had damaged the marble and were no longer stable.

In order the correct past mistakes and reassemble the reliefs with modern conservatorial principles of non-invasive reversibility, the Getty team had to separate all of the fragments, remove the bad joins and pins, then put it all back together again. There were almost 50 fragments so it was a challenging job. During the painstaking cleaning of the fragments, conservators were delighted to discover the remains of the ancient polychromy, mostly purple, that added detail and vivacity to the sculpture.

When it came time to piece the fragments back together again, the conservation team took an innovative approach. They inserted steel sleeves into the already existing holes and fitted pins into the sleeves. Magnets were placed inside the ends of the pins and the sleeves. That way the fragment connect via the magnetic pins, meaning there is no need for adhesives and the fragments can be dismantled in minutes. Lastly, they created a custom mount that works with the new pinning system to keep the group secured.

The right corner group with Melpomene and the bearded man was not added to the display for practical reasons. The corner piece would make it necessary to block out a display place the equivalent of the large sarcophagus, most of that empty space. The group of four are discretely mounted to the wall.

The online exhibit lays out the complications of the restoration process, how conservators have to devise new solutions to fix their predecessors’ mistakes, the role modern design and technology can play to improve the display and long-term care of formerly abused antiquities.