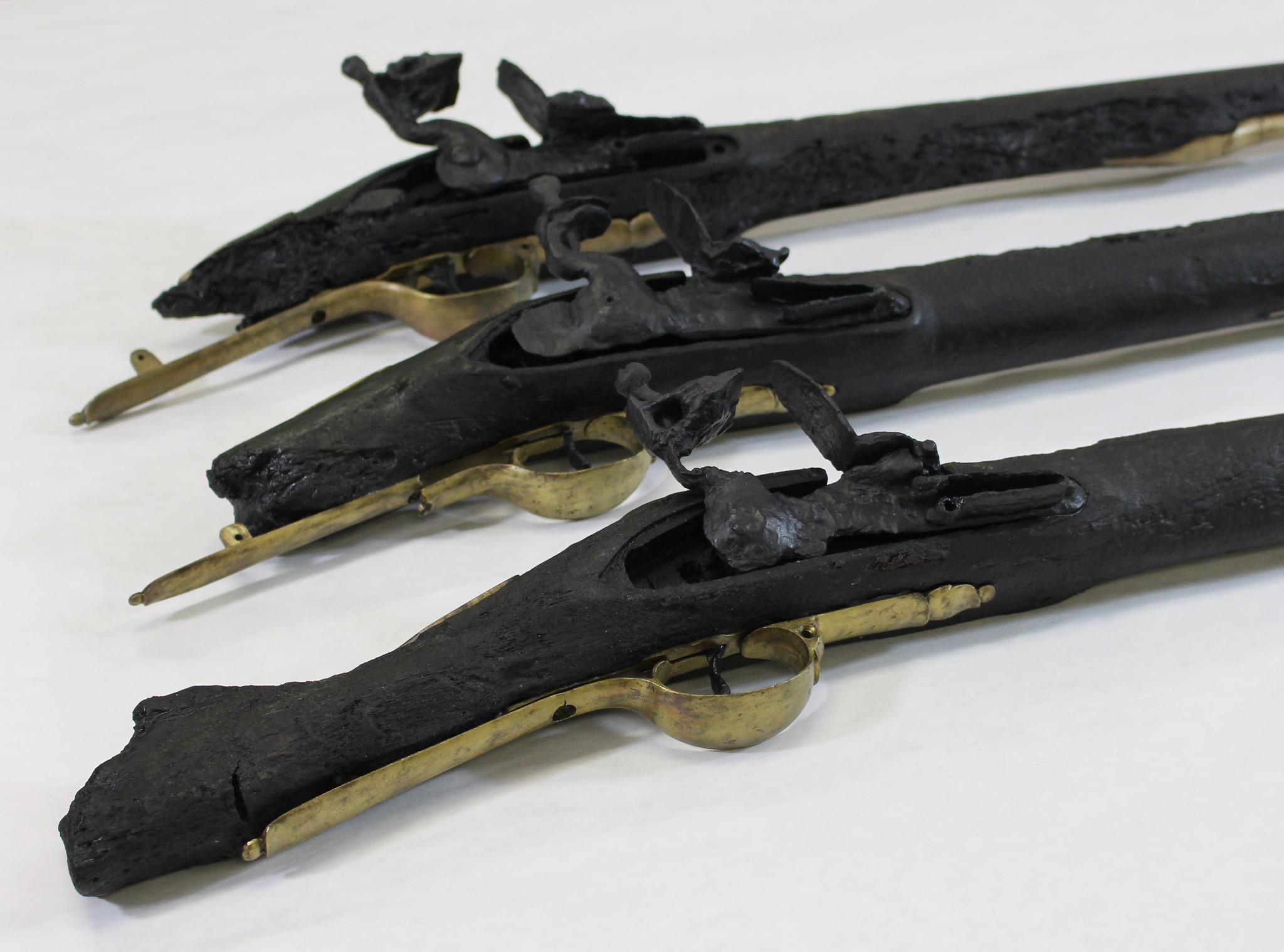 Three muskets recovered from a Revolutionary War-era shipwreck off the coast of St. Augustine, Florida, have been liberated from thick layers of concretion to reveal intact stock, lock, and brass furniture. The hardened outer layer of corrosion, sediment and marine life took years of painstaking conservation to remove.

The muskets were recovered from a site known as the Storm Wreck which was discovered in 2009 and excavated by marine archaeologists, students and volunteers with the Lighthouse Archaeological Maritime Program between 2009 and 2014. The wreck was one of a fleet of more than 130 British ships, Royal Navy and private, that were enlisted to evacuate Loyalists from Charleston, South Carolina, to the safety of British East Florida in December 1782. They succeeded in fleeing the threat posed by the Continental Army, but for the Storm Ship, the topography of British East Florida itself would be fatally dangerous. The ship ran aground on the treacherous sandbar of St. Augustine on New Year’s Eve, 1782.

Hundreds of artifacts have been recovered from the site, including two British cannons stamped with the date 1780, buttons from regimental uniforms of the Royal Provincial, the 63rd Regiment of Foot and 71st Regiment of Foot, a gentleman’s pocket pistol and the ship’s bell, which is unfortunately devoid of markings so we still don’t know the name of the ship. There are no Royal Navy motifs, so it may have been privately owned.

Many of the recovered objects were obscured inside “rocks” of massed concretions. Conservators took x-rays of the concretions to map out the

artifacts within and develop a plan to remove the layers while replacing the salts that will eat away at the object as soon as it is exposed to air. An x-ray of one of the Brown Besses revealed a lead shot that looked like it was in the barrel but was actually to the right of it embedded in the concretion material.

Conservators removed the outer layer of corrosion to reveal the muskets, complete with intact stock, lock, and brass furniture. The stocks were preserved in polyethylene glycol, to bulk and support the waterlogged wood cells as they dried.

The brass furniture included the ramrod pipes, side plate, wrist plate, trigger guard, and trigger plate, all conserved using electrolysis and later affixed to the dried stock. The locks were partially corroded away and partially preserved; leaving an intricate shape that required step-by-step casting and removal of the corrosion. The locks were the last feature added back to the stocks, which completed the treatment and readied the muskets for eventual display at the St. Augustine Lighthouse & Maritime Museum.