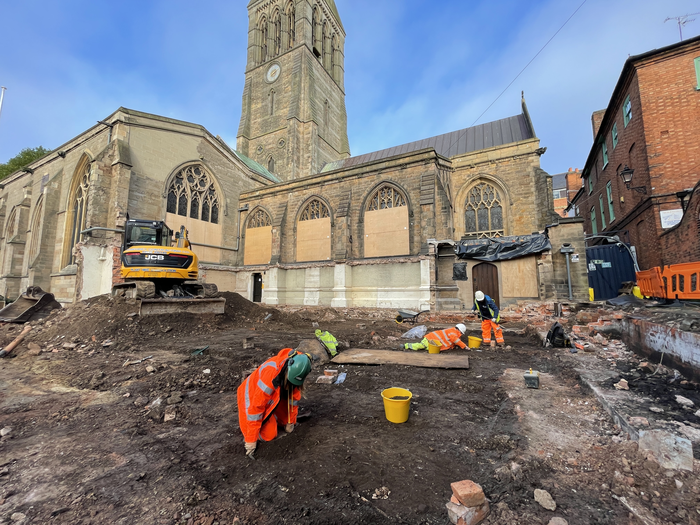 The team behind the discovery of Richard III have resumed major archaeological excavations at Leicester Cathedral, close to where the English king was found.

Archaeologists and other experts from University of Leicester Archaeological Services (ULAS) are leading excavations on the site of the Old Song School, at the eastern end of Leicester Cathedral, which could reveal aspects of Leicester life from the past 1,000 years. The area within the Cathedral Gardens, previously part of St Martins’ churchyard, is being transformed into a new heritage and learning space as part of the Leicester Cathedral Revealed project, enabled by a £4.5 million grant from the National Lottery Heritage Fund.

In advance of the regeneration, ULAS experts and colleagues from the University’s School of Archaeology and Ancient History hope to examine a cross-section of the city’s history and learn more about the early foundation of the Cathedral – formerly a Parish Church – on the site. These archaeological excavations, up to two metres below ground level, will allow experts to track the history of this part of Leicester from the Victorian period through Medieval, Saxon, Roman and perhaps even to early Iron Age settlement.

Mathew Morris, who was part of the team which unearthed the remains of Richard III in 2012, leads the excavations. He comments, “this is in an area of Leicester which we rarely get to excavate, and it’s going to be the first time which we have excavated a continuous cemetery sequence dating from the late Saxon period to the relatively recent past, giving us a fantastic opportunity to investigate the story of Leicester through the lives of the people who lived and were buried here.

“The excavation is also going to give us the chance to explore the origins of the Cathedral site, including the foundation of the original church and aspects of the Roman town which predated it.”

Preliminary investigations took place in late 2021, with the ULAS team carefully uncovering more than 120 burials in the top-most layers on the site. The area was once used as the churchyard for burials of people from all walks of life living in the surrounding parish. It is believed that there could be hundreds more burials on the site, which experts will need to painstakingly excavate by hand. Samples will then be tested by University of Leicester experts, which will reveal insights into the life of those who lived, worked and died in the city.

“The individuals offer an unprecedented glimpse into life in Leicester through the Medieval and Post-Medieval periods,” says Dr Sarah Inskip, who is leading the work to study these remains. “The ability to assess individuals from one location over such a long time period will allow us to see how the lives of Leicester people changed with major social upheaval and transitions, such as epidemic disease, the arrival of new global commodities such as tobacco, and industrialisation.”

Building work on the Leicester Cathedral Revealed project is led by main contractor Messenger Construction Ltd. ULAS excavations are expected to last for several months, with post-excavation work taking place into 2023. Once the project is completed, the studied individuals will be reinterred by Leicester Cathedral.

Later in 2022, the University of Leicester will mark the 10 years since the discovery of the remains of Richard III in a Leicester car park. Working with the Richard III Society and other partners, ULAS archaeologists unearthed the King’s mortal remains in a trench in 2012. Further study, including genetic testing of the skeleton’s DNA against a known modern-day relative, revealed the remains belonged to the last Plantagenet King.

Richard’s remains were later reinterred in a specially-created tomb at Leicester Cathedral in 2015, in the presence of Justin Welby, Archbishop of Canterbury, and members of the Royal Family.

“Leicester Cathedral is pleased to be working with ULAS once again on the archaeological excavation work for our Leicester Cathedral Revealed project that will renew the Cathedral so that it can be its very best as a place of worship, heritage, pilgrimage, hospitality, learning, sanctuary and celebration,” says David Monteith, Dean of Leicester. “The archaeological excavations are a key element of the repair and restoration works to the existing Cathedral building and the construction of a new visitor and learning centre, The Chapter House – a striking extension to the Cathedral on the footprint of the Old Song School. The Chapter House will provide an exhibition gallery with immersive interpretation, a flexible learning space for school children and community groups, facilities for volunteers and WCs.”