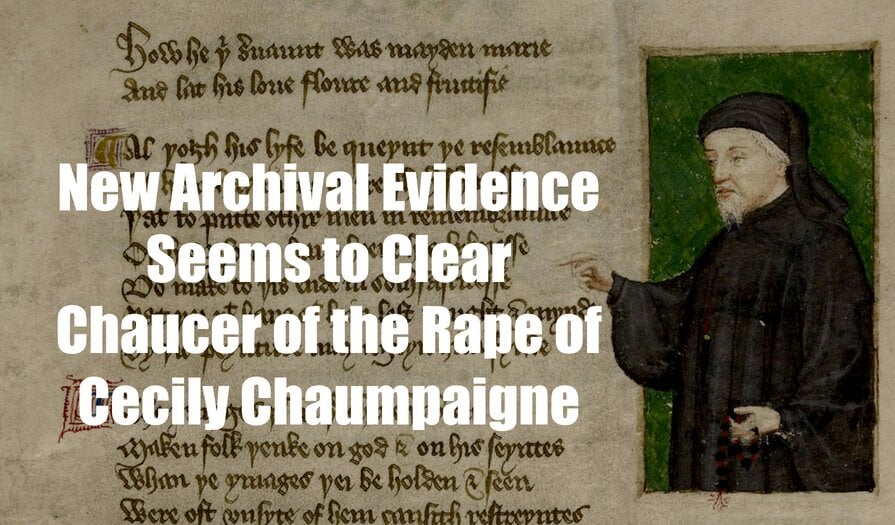 Warning Please be aware that this article contains discussion of sexual assault and may be triggering to some readers.

Tuesday, October 10th was a momentous day in the field of Chaucer studies. The National Archives in London hosted a virtual event titled “Geoffrey Chaucer and Cecily Chaumpaigne: rethinking the record.” The event was packed. Tickets sold out well before it started (not something that happens in all that many Chaucer events, I can assure you), and attendees tuned in from across North America, the UK, Europe, and Asia. It was a veritable who’s who of Chaucer scholars. I felt a bit like I was looking at my bookshelf as I skimmed over the names of those present. But the event was monumental. New evidence had been brought to light on one of the most contentious and thoroughly debated aspects of Chaucer’s life. Everyone tuned in to see what it was.

In 1380, Geoffrey Chaucer was involved in a lawsuit over the raptus of Cecily Chaumpaigne, the daughter of a prominent London baker. We know of the charge because of a document discovered by Frederick J. Furnivall in 1873, in which Chaumpaigne clears Chaucer of all charges related to her raptus. What exactly is meant by the word raptus has inspired a mountain of scholarly debate. In legal records the word is used to refer to rape but also to abduction and a variety of other offenses.

Since the discovery of that document, Chaucer scholars have grappled with it. Throughout most of the 20th century, many leant heavily on the idea that the word raptus referred to abduction rather than rape, and therefore denied the idea that Chaucer, the celebrated “father of English poetry” was a recorded rapist. Then, in 1993, Christopher Canon discovered a second quitclaim that did not contain the word raptus but that seemed to suggest that Chaucer’s crime had, in fact, been rape. As Canon himself emphasized yesterday in his response to the new findings, the evidence he released in 1993 deepening Chaucer’s guilt was met with dismissal from many established Chaucer scholars at the time and was slow to be accepted in the scholarly world. Again, Chaucer scholars were unwilling to accept that the famous poet could be guilty of rape.

In the subsequent decades, however, Canon’s finding was more broadly accepted. Chaucer scholars became somewhat less apologetic and/or dismissive of the poet’s heinous act, and many feminist scholars began to read the implications of Chaucer’s crime against his poetry, which itself frequently perpetuates rape culture.

Yesterday, however, new evidence was released that seems to suggest that Chaucer was not, in this instance, guilty of rape.

New Evidence About the Relationship of Geoffrey Chaucer and Cecily Chaumpaigne

The presentation held Tuesday revealed the findings of Euan Roger, the principal records specialist for the medieval period at the National Archives, and Sebastian Sobecki, a professor of late medieval literature at the University of Toronto. Their findings were presented at the packed event and then released shortly thereafter in a special issue of The Chaucer Review called “The Case of Geoffrey Chaucer and Cecily Chaumpaigne: New Evidence.” Some of the articles are open-access and available here.

The panel and special issue revealed that Roger and Sobecki have discovered two hitherto unknown historical documents, which they suggest clarify the relationship between Chaucer and Chaumpaigne and prove that the original quitclaims discovered by Furnival and Canon did not, in fact, refer to rape.

The first document they found was in the King’s Bench Precepta Recordorum files for 1379–80. These files “primarily consist of miscellaneous process documents—including royal pardons, writs, and warrants—that accumulated in the offices of the King’s Bench as a byproduct of the many legal processes that underpinned the functioning of the law courts over the course of each year.” (Roger and Sobecki, The Chaucer Review 57.4 (2022), p. 414).

Among these files is a document dated April 9, 1380 in which Cecily Chaumpaigne appointed two attorneys to act on her behalf to answer a charge brought by Thomas Staundon under the Statue and Ordinance of Labourers. He charged her for leaving his service before the end of her term of employment (something that was not allowed at this time). You can view the original document on the National Archives’ blog.

That name was familiar to Roger and Sobecki because Staundon had also charged Chaucer the year before with “trespass and treason.” As I indicated in my recent feature on “Chaucer’s Day-Jobs,” Chaucer scholars had hitherto been unable to determine what crime that referred to.

Staundon claims that “the aforesaid Geoff admitted and retained Cecily Champayn, formerly the servant of the aforesaid Thomas, in his service at London, who has departed from the same service before the end of the agreed term, without reasonable cause of license of Thomas himself, into the service of the said Geoff.” (qtd. in Roger and Sobecki, p. 420).

As you can see, this writ concerning Geoffrey Chaucer and Cecily Chaumpaigne has nothing to do with rape. It is a labour dispute. Cecily worked for Thomas Staundon. She left Staundon before the term of her contract was over (which went against the regulations established in the Statue and Ordinance of Labourers), and Staundon was suing her for having done so and Chaucer for having drawn her away.

Using this context, Roger and Sobecki returned to the original quitclaims. They suggested that those two quitclaims were connected to this original charge. They argued that the term raptus did not refer to rape or physical abduction, but instead was a more metaphorical representation of “the physical act of Chaumpaigne leaving Staundon’s service—using the language of “abduction” to represent a physical transfer from one household to another” (Roger and Sobecki, p. 427).

Their argument boils down to this: Chaumpaigne left Staundon’s service for Chaucer’s. She was not physically abducted, but more likely lured away by the promise of better wages (which was not allowed at the time but not uncommon). Staundon did not like that, so he charged both Chaucer and Chaumpaigne under the Statute and Ordinance of Labourers. Eventually, a quitclaim was issued as the case wrapped up that used the term raptus to refer to Chaumpaigne’s physical departure from one household to another.

Their evidence and argument indicate that the case of Cecily Chaumpaigne had nothing to do with rape.

The Significance of the Find

Needless to say, this find was greeted with much interest from the Chaucer scholars at the event who praised the ground-breaking work of Roger and Sobecki. This is the most significant archival find in Chaucer studies since Christopher Canon found the second quitclaim in 1993. Many Chaucer scholars have long worked under the assumption that Chaucer was a criminal and a rapist. I myself recently wrote a feature on Chaucer’s professional life for this website and included “Criminal” as one of Chaucer’s vocations. In that feature I cited both the Staundon case and the Chaumpaigne case. These findings would seem to suggest that I need to rethink that representation of Chaucer’s life.

New work will need to be done too on Chaucer’s biography. Indeed, the event ended with many calls for new studies reassessing Chaucer’s life records and more archival work to find out more. As Sobecki said in the question-and-answer period, what they found was just the tip of the “archival iceberg.”

It’s an exciting time to be a Chaucer scholar.

Do These Findings Absolve Chaucer of Rape?

So, the question we are left with is do these findings prove concretely that Chaucer was not guilty of rape? I would say that no, they do not. While Roger and Sobecki’s findings seem to acquit Chaucer of this particular account of rape, they do not do so absolutely. Medieval scholars have already taken to Twitter to recenter the focus on the use of the term raptus, which some claim is not adequately explained in Roger and Sobecki’s findings. There are already calls for further research into other uses of this very loaded term in labour disputes and into whether the raptus quitclaim could refer to a second offense (i.e., that Chaumpaigne entered Chaucer’s service and was later raped).

Chaucer also cannot be absolved from his active perpetuation of rape culture. After the new evidence was presented at the event, responses were given by Sarah Baechle, Carissa M. Harris, and Samantha Katz Seal. All three scholars emphasized that Chaucer should not be absolved for the perpetuation of rape culture, which he does throughout his writing. Baechle, for example, showed that some women in Chaucer’s work are more “violatable” than others. Harris explored the problematic way that Chaucer depicts female servants, emphasizing that this find should not relieve us of discomfort but should instead ask us to rethink issues of male power and dominance that may relate directly to his relationship with female servants. Samantha Katz Seal highlighted the damage done by the generation of Chaucer scholars from before this find who dismissed Chaucer’s charge of rape in painfully misogynistic ways sometimes even celebrating Chaucer as both rapist and the father of English poetry.

Each made it clear that Chaucer cannot and should not be absolved from his participation in rape culture. Rape is everywhere in Chaucer’s work. The knight of the famous Wife of Bath’s Tale, for example, is a convicted rapist who is not really punished for his crime. He ends his romance with all his wishes granted. As Carissa M. Harris said in her presentation, Chaucer portrays rape in “really fucked up ways.”

And so, perhaps the greatest outcome of this find is the new work that it will inspire. More archival work will hopefully bring out new life records for Chaucer and other medieval poets. But the new information about the relationship between Chaumpaigne and Chaucer will also hopefully lead to new work on the precarious position of female servants in Chaucer’s life and culture. And ongoing work will still need to be done on Chaucer’s (and some Chaucer scholars’) perpetuation of medieval (and modern) rape culture.

Top Image: Portrait of Chaucer from a manuscript by Thomas Hoccleve