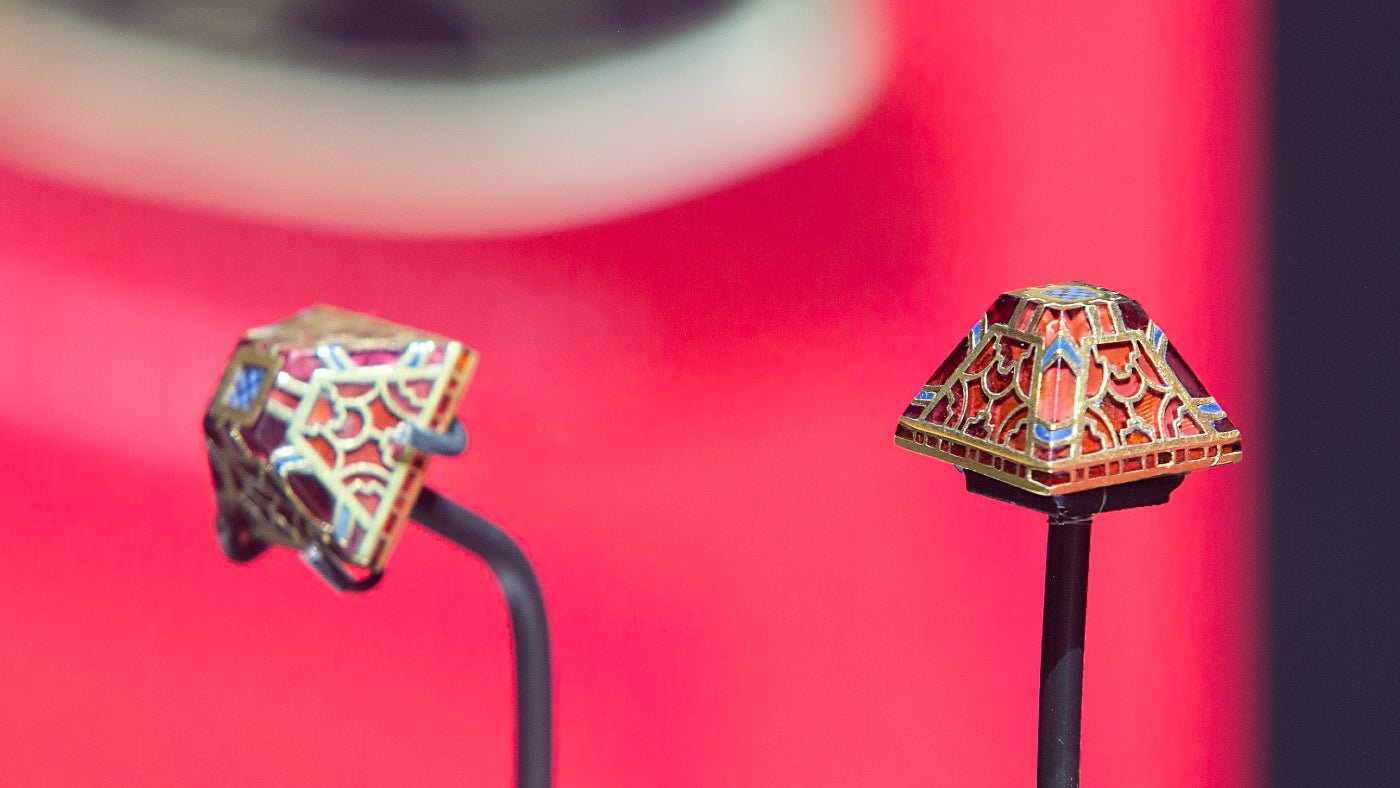 Two of England’s most important early medieval archaeological discoveries have been reunited for a new exhibition, Swords of Kingdoms: The Staffordshire Hoard at Sutton Hoo.

Experts believe that the similarity in design and craftsmanship between some of the objects from the Staffordshire Hoard and Sutton Hoo may indicate they were made in the same 7th-century workshops in East Anglia. As the first display of Hoard items in the region, the exhibition marks a possible ‘homecoming’.

The finds from the Staffordshire Hoard are predominantly weaponry fittings. They are estimated to have come from between 100 –150 different swords, whose owners would have commanded some of the great battles of the kingdom wars of 7th-century England, at a time of huge change politically, religiously and culturally.

As well as fittings from swords, the exhibition includes those from a seax found as part of the Staffordshire Hoard. A seax is a long fighting or hunting knife and this is one of the finest surviving examples, possibly made for East Anglian royalty. The zoomorphic (animal form) interlaced designs across the seax collars bear a striking resemblance to the design of the shoulder clasps discovered at Sutton Hoo, one of which is also on display in the exhibition.

“Every object tells a story,” says Laura Howarth, Sutton Hoo’s Archaeology and Engagement Manager. “Whilst you can immerse yourself marvelling at the stories and skills behind each of the objects on display, Swords of Kingdoms is also a special opportunity to unite objects from different collections and weave a shimmering web of connecting threads which together speak of the 7th-century warrior elite and a period of great change. Some chapters of each story may be lost to us today, but it is fascinating to wonder and imagine this gold and garnet adorned age.”

The exhibition has been curated in partnership with Chris Fern, an expert in the Staffordshire Hoard. “The Staffordshire Hoard is a collection of Anglo-Saxon treasure from the battlefield which included golden warrior objects from swords, war-saddles, a royal helmet and a great war cross,” says Chris. “Like the related treasures of Sutton Hoo, they show us a distant age that mixed pagan magic with new Christian beliefs. This was a time when kingdoms across Britain battled for supremacy, when kings fought and slayed each other. A bit like Game of Thrones, but real.”

As well as objects from the Staffordshire Hoard, several original items from the famous 1939 dig have returned to Sutton Hoo on loan from the British Museum. Among those are the gold and garnet cloisonné sword pyramids discovered by archaeologist Peggy Piggott which were the first items of gold found there. The discovery of these sword pyramids changed the whole character of the 1939 excavation as further treasures then began to emerge from the ship’s burial chamber.

“Although some of the objects on display now bear their own ‘battle scars’ of damage inflicted during systematic object dismantling in the 7th century or from lying buried over centuries, others glitter as if freshly forged,” added Laura Howarth. “The intricacy, complexity of design and skill of the Anglo-Saxons goldsmiths is truly breathtaking and this is such a special and significant occasion to be able to see some of their finest work on display at Sutton Hoo.”

Swords of Kingdoms: The Staffordshire Hoard at Sutton Hoo will run until 30 October 2022. Click here to learn more.