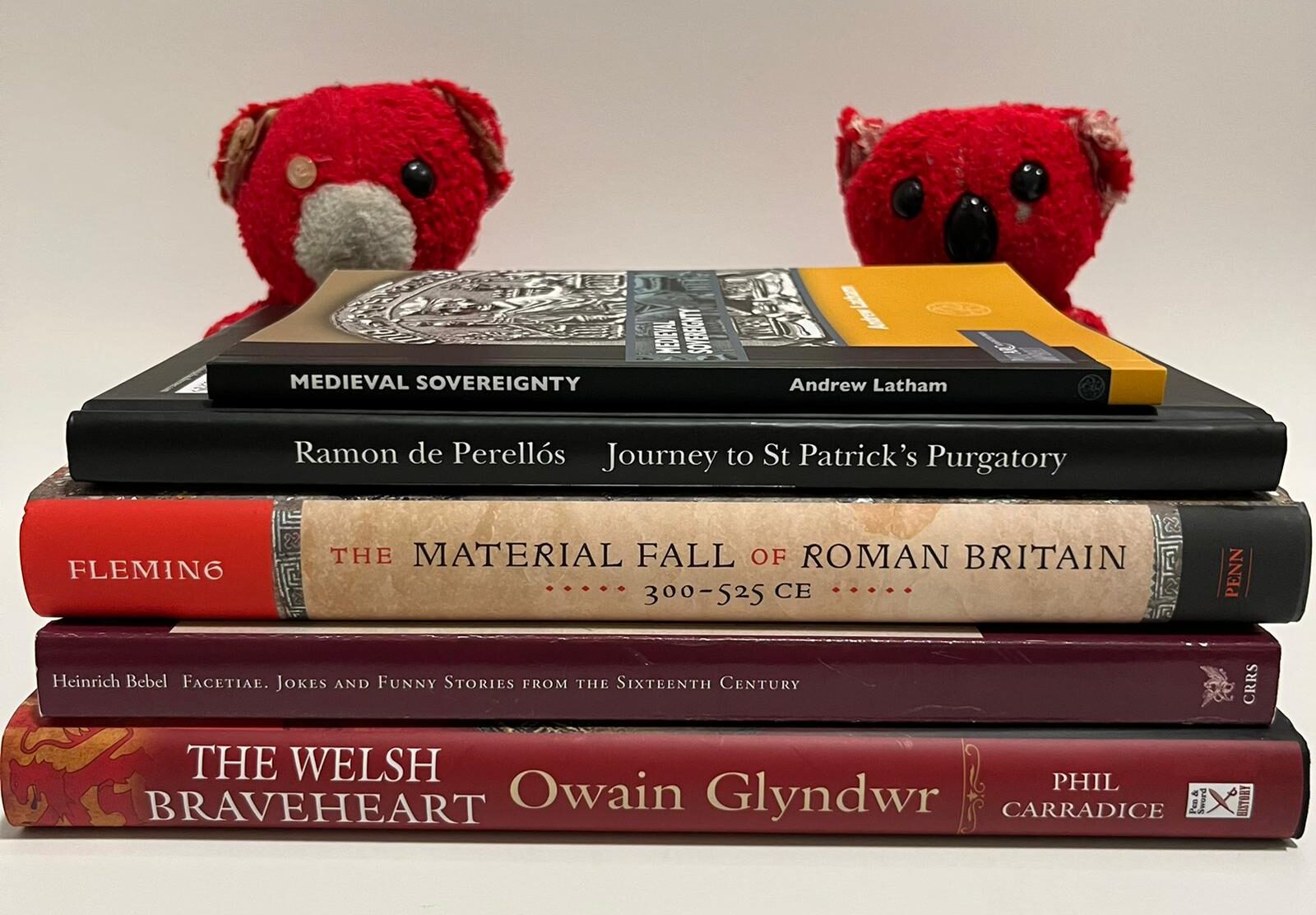 Five more books to tell you, taking you to England, Wales, Ireland and the Holy Roman Empire.

Excerpt: Each chapter attempts to map how those engaged in political disputes thought about the location of supreme authority. Was sovereignty vested in the person of the emperor? The pope? Or was it vested in more abstract or collective institutions such as “the crowd”, “the council”, or even “the people”? Each chapter also seeks to illuminate the various ways in which canonists and polemicists justified and explained their respective conclusions regarding the proper locus of supreme authority.

Excerpt: In the winter of 1397, the Catalan nobleman, Viscount Raymond de Pelos, travel to Ireland with the aim of entering the underground cavern on Station Island in Lough Derg (in the modern county of Donegal) known as St. Patrick’s Purgatory and famous throughout medieval Europe as a gateway to next world. Hia stated reason for undertaking the journey was to ascertain if the soul of his recently deceased master and friend, King John I of Aragon, was, if not in heaven, at least in purgatory, and so ‘in the way of salvation’.

Excerpt: So why should we be interested in the late Roman material culture regime and its end? Although Britain in 300 CE had been as Roman as any province in the empire, in the generations on either side of 400, urban life, industrial-scale manufacturing of basic goods, the money economy, and the state collapsed. One of the consequences of these dislocations is that many of the most ubiquitous, quotidian, and fundamental categories of Roman-style material culture ceased to be manufactured and used in Britain. Skills related to iron and copper smelting, wooden board and plank making, stone quarrying, commercial butchery, horticulture, and tanning were disappearing, as was the knowledge standing behind the production of wheel-thrown, kiln-fired pottery and building in stone. The material losses that resulted were severe. No other period in Britain’s prehistory or history witnessed the loss of so many classes of once-common objects, and these disappearances triggered fundamental changes in the structures of everyday life.

Facetiae, Jokes and Funny Stories from the Sixteenth Century

Excerpt: There was once a princeling who wanted to hang his miller who have been caught stealing. Just as the miller was climbing a scaffold, the Lord demanded, conjured, and obliged him under oath, to show him a miller who was honest and truthful. The miller swore on oath that he could not. ‘If that is the case,’ said the princeling, ‘come on come down and live! I would rather deal with you there was another thief who might be even more grasping.’

You can also buy this book on Amazon.com

The Welsh Braveheart: Owain Glyndwr, The Last Prince of Wales

Excerpt: Owain Glyndwr is symbolic of the Welsh desire for freedom and Independence, but like all superheroes, he’s a man of mystery. At this distance in time he can be little more than a briefly glimpsed figure who flits across the imagination and senses like a wraith, like a wisp of autumn smoke on the hillside. Few primary source materials from him period when he was active have survived and those that do exist are usually subjective in the extreme. As a result of this absence the documents which might have put flesh on his bones – even to the date of his birth and death – are few and far between. And that, of course, means that in recounting the life of a man who remains Wales’s greatest hero is hard to know where history ends and legend begins