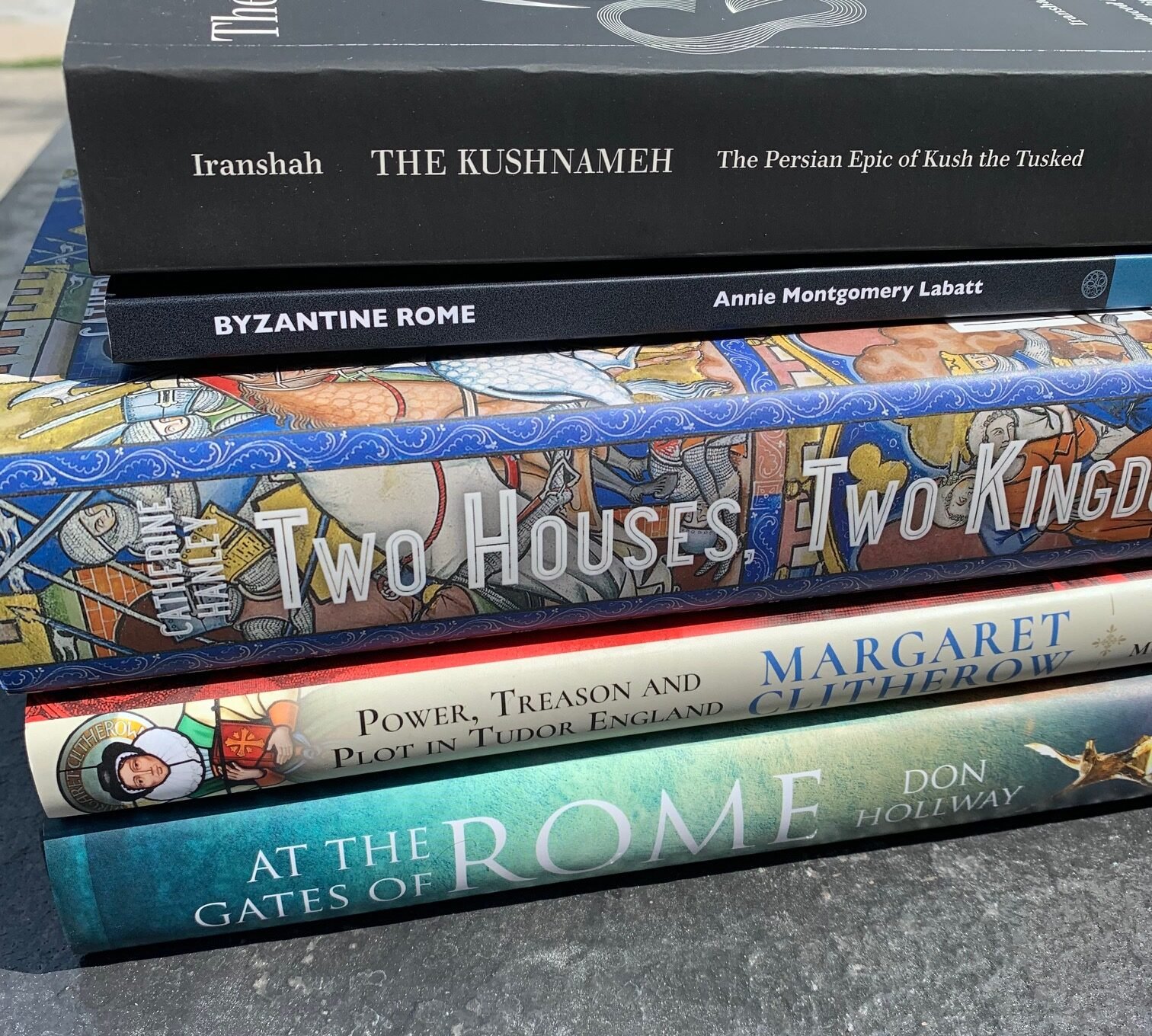 Five more brand new books about the Middle Ages to tell you about.

The Kushnameh: The Persian Epic of Kush the Tusked

Excerpt: The Kushnameh, meaning The Epic of Kush, is an epic about a monstrous king with tusks and ears like an elephant. This story takes place across the vast geography that spans most of the Eastern Hemisphere, from China and Korea in the East to the Pyrenees and the Sahara in the West. In so far as one can speak of medieval globalization – a process of encounter and increasing connectedness driven by the rise of diverse literate, urban societies across the Eastern Hemisphere, and an increasing consciousness of how large and how diverse the world was – The Kushnameh can be considered an epic of the global Middle Ages.

Excerpt: This book discusses the word Byzantine and how it affects the way the monumental art, the frescoes and mosaics of Rome, have been described. The iconography and styles of the decorative programs shift a great deal, which allows a consideration of shared or shifting preferences throughout medieval Roman Christendom. By looking at iconography, controversies, and styles, we can determine when the East should be considered culturally different. It is only when that dissimilarity is fully established that it is appropriate to call the culture Byzantine. Before that time, both Rome and the pan-Mediterranean culture it shared cannot be called Byzantine at all. In that sense, this book’s title refers to something that was not really there. Strictly speaking, there is no such thing as Byzantine Rome.

Excerpt: This is a book about people. In the twelfth and thirteenth centuries, the personal could influence the political to a great extent, and nowhere is this better exemplified than in a relationship in the ruling houses of France and England, whose members waged war, made peace and intermarried – sometimes almost simultaneously – in a complex web of relationships. These people, these kings and queens, siblings, children and cousins, held positions determined by birth; positions that often involved playing a role on the national and international stage from a very young age. Their life stories, their formative experiences and their interpersonal relationships shaped the context of decisions and actions that had the potential to affect the lives and livelihoods of millions.

Excerpt: Margaret’s story is remarkable for a number of reasons. In a society where virtually all the power and wealth were held by men (with the obvious exception of Queen Elizabeth), she made a committed stand against the authorities and their legal system. Under tremendous pressure, and facing barbaric execution, she refused to recognize the jurisdiction of the court that was attempting to try her. Although her actions were considered subversive by the Protestant authorities, she wasn’t calling for revolution. Margaret Clitherow simply wanted the freedom to worship the way her parents had 30 years earlier.

At the Gates of Rome: The Fall of the Eternal City, AD 410

Excerpt: The story of this work is the resulting struggles between foreign invaders and native-born generals, senators, and bishops, under emperors who were anything but absolute. Any man with enough soldiers behind him might declare himself emperor and even make it so, but rising to position and power was less a way to avoid violent death than to invite it. Post-Gibbon, historians have tallied over 200 reasons why the Western Empire fell, and are still counting. We will concern ourselves only peripherally with the millions of peasants, city dwellers, patricians, and plebeians who were sucked into that maelstrom, to focus more on those Romans and barbarians who aspired to mastery of the known world, most of whom never lived to see its end. Above all, there were two men – Flavius Stilicho, supreme military commander of Rome, and Alaric, king of the Goths – who had it in their power to halt the final collapse. The question, then, must be, why didn’t they?