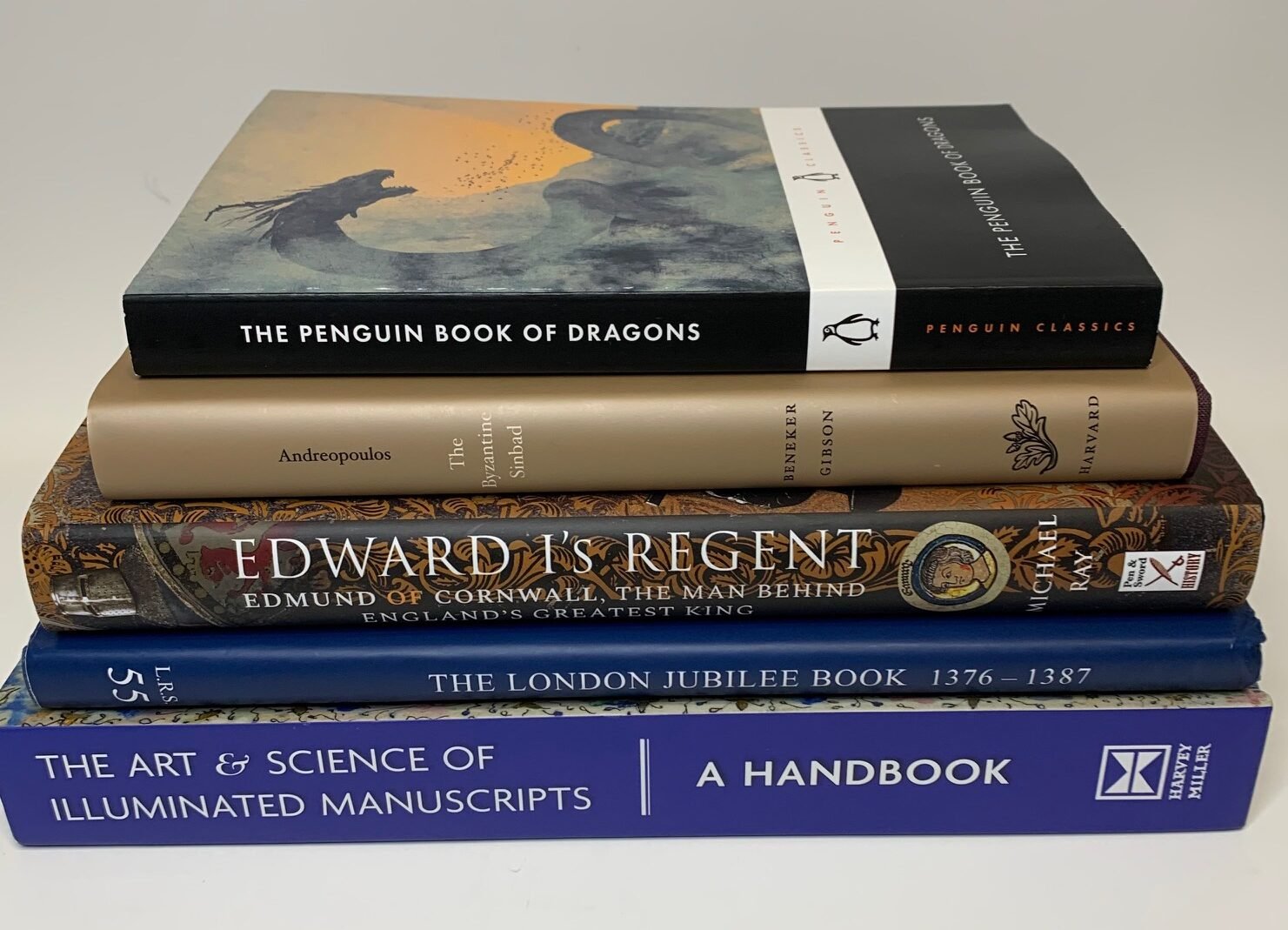 Five new books about the Middle Ages, taking you from Byzantine literature to how manuscripts were made.

The Penguin Book of Dragons

Excerpt: Stories about dragons have endured in cultures around the globe for over two millennia, their appeal tenacious for several reasons. Rippling with power and snorting flames, dragons are the test against which we measure the limits of the heroes we venerate. Inhabiting the fringes of the world, first in distant countries and then in places deep below the earth, dragons mark the boundary between the known and the unknown. Providing a malleable template for mythmakers and storytellers, dragons persist in our imagination both as flesh-and-blood monsters and as powerful metaphors for sin and other destructive forces. By the dawn of modernity, dragons were already in full retreat before the advance of human knowledge, “but the domestication of these monsters in children’s literature gave them a new lease on life, ensuring their survival as friends and as foes for generations to come.

By Michael Andreopoulos, translated by Jeffrey Beneker and Craig A. Gibson

Excerpt: This book which you see before you, my friend, is that of the fable writer Syntipas as told by the Syrians, or rather, as written down by the wise Persian authors. It was written in the Syrian language, and then I myself translated and wrote the book in the present Greek version, though I am the last of grammarians. I, Michael Andreopoulos, a Christian, published this work as a commission from Gabriel, the glory of the nobility, the venerable governor of the city named for honey, who is truly a fervent suppliant of Christ, and who directed that this story be written because it did not exist among Romans’ books. For this book especially disparages evildoers, and, in its conclusion, praises deeds that have been nobly done.

Excerpt: Edmund of Almain was the son of Richard, Earl of Cornwall, the second son of King John and brother of Henry III. Richard was a dominant figure in England during Henry’s reign but he was also a player on the European stage, being elected King of the Romans. When he died in 1272, just before the accession of Edward I, Edmund succeeded him both as earl and as the richest man in the kingdom. He was such for almost the whole of the reign of his cousin, King Edward I. The position of magnates during the reign of Edward I was very different from those of Henry III. This was due to the strong character of the new King, bad memories of civil unrest, and the responsible actions of the earls including Edmund.

Edited and translated by Caroline M. Barron and Laura Wright

Excerpt: On 16 March 1387, during the mayoralty of the fishmonger, Nicholas Exton, at a particularly large meeting of the common council, it was ‘agreed and adjudged’ that a book known as the Jubilee Book should be taken outside the Guildhall and burnt. The reason for this drastic action was that the book had given rise to great controversies, discussions and disputes among the citizens because it contained, it was alleged, ‘certain new oaths of the officers of the said city, and certain new ordinances, repugnant to the old and approved customs of the same.’

The Art and Science of Illuminated Manuscripts: A Handbook

Excerpt: This handbook tracts major developments in European illumination over the course of ten centuries, with special focus on painting materials and techniques. It offers a synthesis of the colourants, binders and parchment treatments identified by scientific analyses in Western European, Byzantine and Old Russian manuscripts. The aim is not merely to list the pigments identified, but to discuss how they were used and why. These discussions are accompanied by a summary of historic sources about illuminators’ materials and techniques, and by an overview of the analytical techniques available for their identification. Two case studies on incunabula are included to stimulate the analyses of illumination in early printed books as a vital component of studies in intellectual and art history of the early modern period.