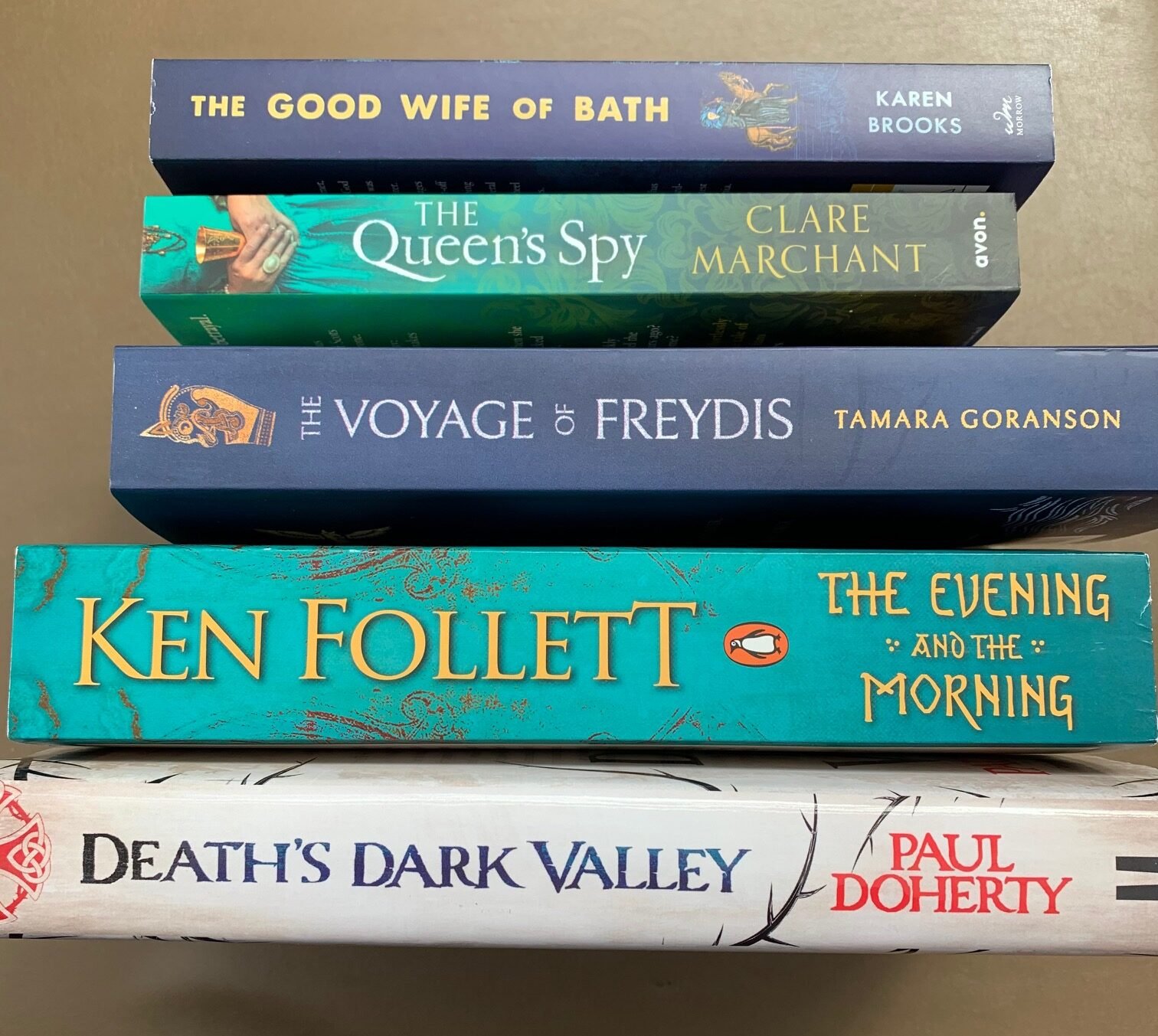 The Good Wife of Bath

Excerpt: My father would oft remark that the day I was born, the heavens erupted in protest. Great clods of ice rained upon poor unsuspecting folk, and the winds were so bitter and cold, those who could remained indoors. Any sod who couldn’t, risked death in the fields along with the shivering, miserable beasts. He didn’t tell me to arouse my guilt, but to remind me to hold up my head and stand proud. I may have been born the daughter of a peasant, but it wasn’t every day a lass could say she made her mark upon the world.

I came into being on the 21st of April 1352, a day henceforth known as ‘Black Saturday’ and not because the woman who’d carried me the last nine months died moments before I arrived, casting a ghastly pall over what should have been a celebration.

Excerpt: All around him crowds of people, men, women and children pushed each other as they disembarked, standing on the quayside looking around in confusion, as if shocked they were finally back on dry land. The air was full of the smell of the sea, now so familiar to him he could taste it lodged in the back of his throat; sharp salt together with the harsh tang of the fish he was so sick of eating, mingling with the reek of sweaty unwashed bodies he barely noticed now. After two days on the boat his legs felt shaky, and although he was on dry land, he could feel himself still swaying slightly. A small boy beside him clutched a cage containing two small yellow birds flitting back and forth. He smiled and winked at the child who grinned back. Everyone seemed delighted to have arrived, even though thankfully it had been a smooth and easy crossing. Above him huge white cliffs soared away to a pale, cold unwelcoming sky. Tom questioned his belief that this journey would help him finally find everything he’d been searching for

The Voyage of Freydis

Excerpt: My husband’s mood is foul. I sit up straight, hoping he won’t notice the perspiration marks underneath my arms because he hates it when I look unkempt. The longer I sit, the more difficult it is for me to share the news. Selfishly, I want to savor my victory and keep the joyful secret to myself. My silence provokes a scornful look. “Show me the bruises on your wrists,” he says as he stabs a chunk of walrus meat and stuffs it whole inside his mouth.

Gingerly, I extend my arm. He flicks a glance at the purple welts. “You brought it on yourself. You must learn your place,” he says as he opens a flask and pours more wine into his drinking horn.

I hang my head and slowly bring my frozen fingers to my cheek feeling like a groveling fool, a whining mammet.

I never used to be like this. Before I wed Thorvard of Gardar, I was the envy of every maiden in the western settlement. The brideprice he offered Faðir for my hand in marriage was greater than any other mundr anyone in Greenland had ever seen: sealskin hides, arctic fox pelts, and sheepskin fleece, narwhal ivory pieces, an expensive iron pot and tempered scythes, twelve ounces of silver, one horse and oxen, and four milking cows. Now he tells me that I am always wrong, that nothing I do is ever good enough, that I am as worthless as a grain of sand. Perhaps I am. He has a way of making me feel small.

The Evening and the Morning

Excerpt: It was hard to stay awake all night, Edgar found, even on the most important night of your life.

He had spread his cloak over the reeds on the floor and now he lay on it, dressed in the knee-length brown wool tunic that was all he wore in summer, day and night. In winter he would wrap the cloak around him and lie near the fire. But now the weather was warm: Midsummer Day was a week away.

Edgar always knew dates. Most people had to ask priests, who kept calendars. Edgar’s elder brother Erman had once said to him: “How come you know when Easter is?” and he had replied: “Because it’s the first Sunday after the first full moon after the twenty-first day of March, obviously.” It had been a mistake to add “obviously,” because Erman had punched him in the stomach for being sarcastic. That had been years ago, when Edgar was small. He was grown now. He would be eighteen three days after Midsummer. His brothers no longer punched him.

Excerpt: He beat his hands against the blankets. ‘And where’s my son?’ Silence answered his question. The old king felt a surge of rage against his feckless firstborn, more interested in his handsome lover Gaveston than anything else. ‘Listen,’ Edward drew himself up, ‘my son is not here, yet we march against the Scottish rebels. Henry Maltravers, you are a knight banneret, but you are also a master of wrought metal. In London you were, like your father, a member of the guild until you flocked to my standard against de Montfort. I knighted you, I gave you great honours.’

“Yes, they were,’ Edward breathed. ‘Now, Henry, I want you to fashion a great cauldron. Once I am dead and my soul gone to judgement, boil the flesh from my bones, put it in a casket and bury it beneath a slab of Purbeck marble at Westminster, next to my beloved Eleanor. My bones you must put in a chest, and whenever you march against the Scots, take it with you. Let those rebels know that in death, as in life, I am utterly opposed to them.’ He stopped, gasping for breath. ‘As for my son . . .”