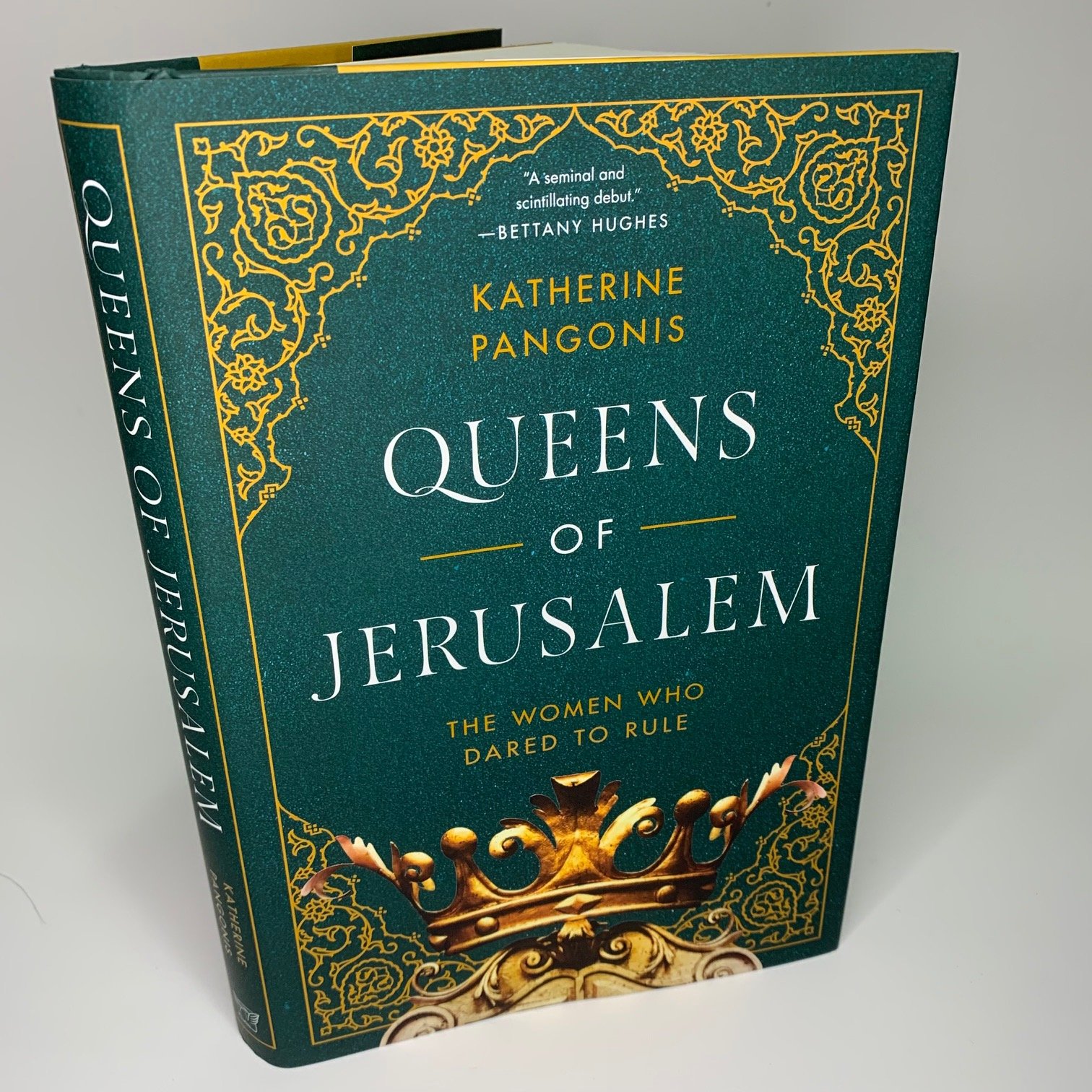 Queens of Jerusalem: The Women Who Dared to Rule

Publisher’s overview: For all the books written about the Crusades, one aspect is conspicuously absent: the stories of women. Queens of Jerusalem tells the story of an extraordinary, trailblazing dynasty of royal women who ruled the medieval Middle East (or Outremer), and how they persevered through instability to seize greater power.

The queens and princesses of this period have been regarded by historians as little more than transmitters of lands and broodmares for the next generation of kings. They have been remembered as the wives, mothers, daughters, and sisters of powerful men. But the instability and near-constant state of crisis in the Crusader States of Outremer from 1099 to Saladin’s conquest of Jerusalem in 1187 created a unique environment in which noble-born women in Jerusalem, Antioch, Tripoli, and Edessa could be propelled to prominence.

Queen Melisende was the first queen to seize political agency in Jerusalem and rule in her own right. She outmaneuvered both her husband and son to seize real power in her kingdom and was a force to be reckoned with in the politics of the medieval Middle East. The lives of her granddaughter Queen Sibylla, her Armenian mother, her three sisters, and their daughters and granddaughters were no less intriguing. They represented a major force in the politics of the medieval Middle East, ruling, conducting diplomatic negotiations, making military decisions, forging alliances, rebelling, and undertaking architectural projects.

Queens of Jerusalem is a stunning debut by a rising historian and a rich revisionist history of the medieval Middle East. This book brings the Queens of Jerusalem, Princesses of Antioch, and Countesses of Tripoli and Edessa out of the shadows and into the public eye. They represent some of the most daring, devious, and devoted women history has ever seen.

Read an excerpt from Queens of Jerusalem:

The historical legacy of women rulers is subject to a variety of unpredictable forces: each of the women discussed in this book has received very different treatment at the hands of historians from the twelfth century to the twenty-first. Some have been turned into sexual fantasies, some have had achievements or crimes attributed to them for which there is little evidence, others have simply been ignored. Few have had any record of their lives accurately or sympathetically recorded, and even fewer have been celebrated.

This is changing. A new interest in medieval queenship has been piqued in the popular imagination in the last fifty years, and in academia more attention has begun to be paid to uncovering the lives of women and bringing their voices back into the narrative. Without this recent progress, led in particular by female historians, this book would not have been written.

For all this, the role played by women in ruling the Christian states of Outremer has been consistently overlooked by the majority of historians. The Queens, Princesses, Countesses and Ladies of this period and region have been reduced by writers to voiceless caricatures: virtuous maidens, scheming harridans and unnatural viragoes. Queen Melisende was one of the few women rulers approved of by William of Tyre, but even his continuators found fault with his decision to present Melisende’s leadership skills alongside her feminine qualities. In the age of chivalry and romance literature, where the stereotypical notions of ‘femininity’ were chiselled still more deeply into Western culture, they attempted to gloss over his descriptions of Melisende’s political agency by attributing to her the more commonly accepted female virtues of beauty and chastity, to make her better fit the mould.

Alice of Antioch has been lambasted by historians, Yvette of Bethany has been variously ignored or presented as a rape victim and Hodierna of Tripoli was remembered in literature chiefly as the distant fantasy of a troubadour. Hodierna’s depiction as an exotic sexual object is not dissimilar to Eleanor of Aquitaine’s portrayal in literature. These two women represent clear examples of politically active medieval women becoming the victims of sexual fantasy and orientalism to audiences both medieval and modern. One must only consider Katharine Hepburn’s iconic portrayal of Eleanor claiming that she ‘rode bare-breasted halfway to Damascus’, or Eva Green’s highly orientalist and sexual depiction of Sibylla in Kingdom of Heaven to see how hard-wearing these clichés have proven to be. Agnes of Courtenay and Sibylla of Jerusalem have been treated differently in different periods of history; sometimes Sibylla has been presented as a mother who murdered her son and destroyed a Kingdom, but in other centuries she has been seen as the paragon of wifely virtue and loyalty, who upheld the sanctity of marriage. These varying presentations bear little relation to evidence and hinge instead on the popular tastes of the time.