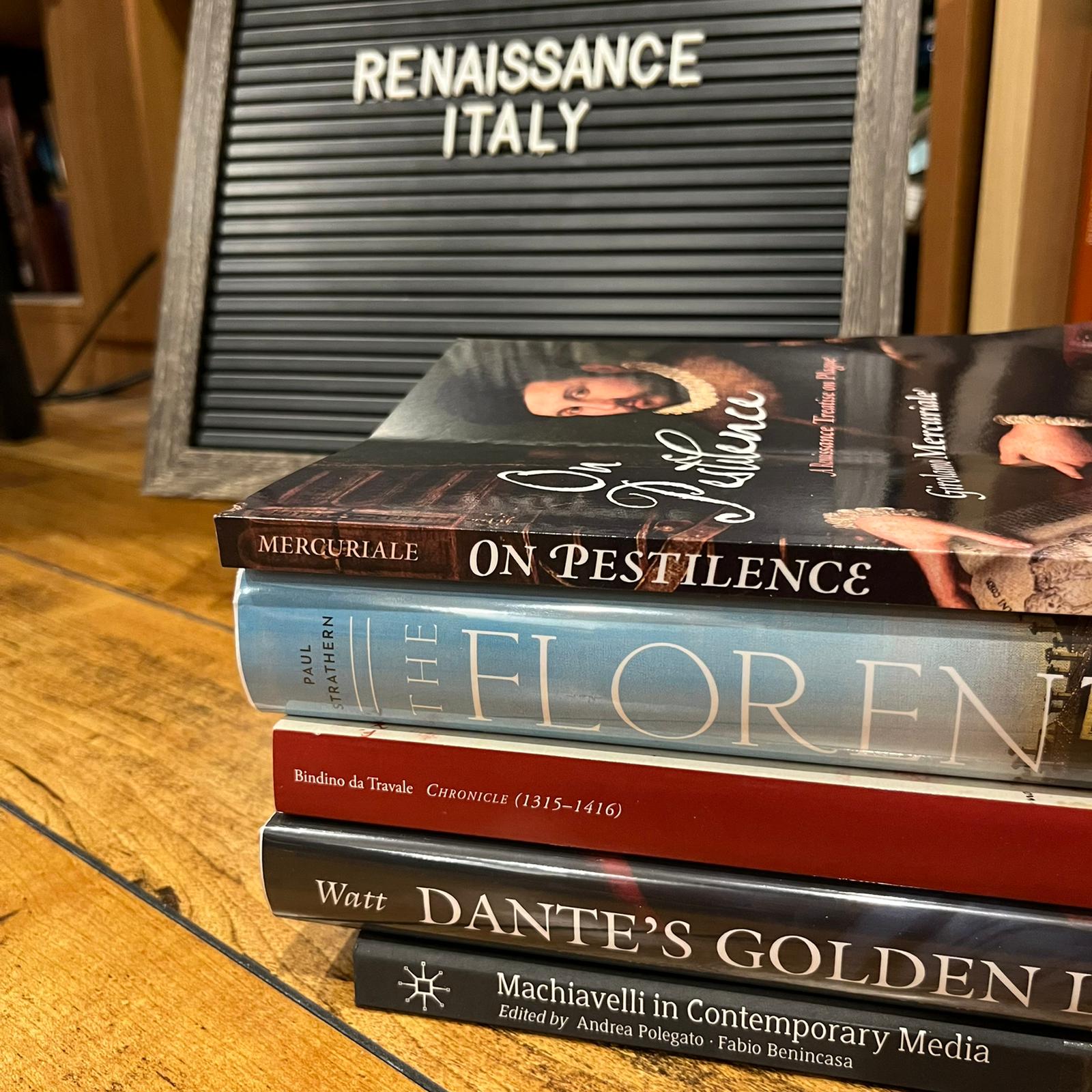 Five new publications on Italian history between the 14th and 16th centuries.

On Pestilence: A Renaissance Treatise on Plague

Excerpt: During and immediately after the plague of 1575–1578, printed pamphlets and treatises that discussed the epidemic flooded Italy’s book market. Many narrated the development of the disaster, describing the plague’s arrival, its spread, governmental and popular reaction, and the suffering endured. Physicians included similar narrations in their treatises before embarking on discussions of causes and treatment. For the most part, the authors of these treatises emphasized contagion between humans as the main factor in the plague’s spread. They often minimized the role of the stars and of the air, which had been mainstays of earlier theories of plagues. Mercuriale, however, endorsed the air’s primary role in causing plague. Many treatises were explicitly critical of Mercuriale’s theories and actions in Venice. For example, Girolamo Donzellini, a physician trained at Padua, had been freed from jail in Venice, where he had been held on charges of heresy, to treat the sick during the plague. In a treatise printed in 1577, he defended the Health Office’s diagnosis based on bodily symptoms such as buboes and criticized those, like Mercuriale, who denied it was “true plague.” Similarly, an astrologer from Verona, named Annibale Raimondo, dismissed air as a cause and blamed contamination of Venice’s wells with sea water for the disease. Mercuriale’s treatise defended his views against such charges.

The Florentines: From Dante to Galileo: The Transformation of Western Civilization

Excerpt: Between the birth of Dante in 1265 and the death of Galileo in 1642, something happened which would transform the entire culture of western civilization. Painting, sculpture and architecture would all visibly change in such a striking fashion that there could be no going back on what had taken place. Likewise, the thought and self-conception of western European humanity would take on a completely new aspect. Sciences would be born, or emerge in an entirely new guise. Part of this cultural transformation would be influenced by the rediscovery of the pre-Christian literature of Ancient Greece and Rome, but much of it would result from how the novelty of this earlier – essentially pagan – outlook came into conflict with, and was assimilated by, the society in which it was rediscovered.

Excerpt: The world of Bindino da Travale (1356 – 1418) seethed with conflict: citizen fought citizen, city-state fought city-state, popes fought emperors, and claimants to sees and thrones fought one another – as eventually did rival popes. To understand the complex world of fifteenth-century Italy, we must dive into the many long-lived enmities and shifting loyalties that shaped the lives of its inhabitants. From this swirling mass of conflict, betrayal, and differences settled in the highest Church councils and in the streets, an otherwise obscure artist,  Bindino da Travale, crafted an amazingly colourful and exciting account of thirty crucial years in northern Italian history.

You can buy the book on Amazon.com

Excerpt: The purpose of this study is a take a new look at the Comedy, a look which hopes to address this surprising void in the criticism. The comprehensive auto-hagiographical reading that I proposed requires an awareness of the notion of self in the Middle Ages and the narratology of life-writing at the time of the comedies composition. It also requires an appreciation of how the medieval writer and reader perceived the notion of truth and its relationship to biography, autobiography, and hagiography. Most significantly, the reading that I propose requires that we understand how Dante approached these notions and recrafted them for his own purposes, in that regard, although the Comedy has been many things to many people, this book attempts to discover what it was to Dante. What I aim to show is that the Comedy is, above all else, Dante’s story, or more precisely Dante’s stories; the story of his love for Beatrice, and of his political vicissitudes, and of his spiritual evolution.

Excerpt: The fascination for Machiavelli and his many masks spread from the world of cultural industry towards everyday life, in which thousands accept conspiracy theories common sense or even as a sign of critical thinking, while idealizing ambiguous and manipulative politicians as non-conformist characters. For these reasons, in Machiavelli in Contemporary Media, we collected contributions on a variety of media to give the reader an idea of how Machiavelli is represented in pop culture (from video games to comic books) and, in certain cases, how he can still guide us to contemporary issues and themes (from Trump’s rise to power to self-representations of power).