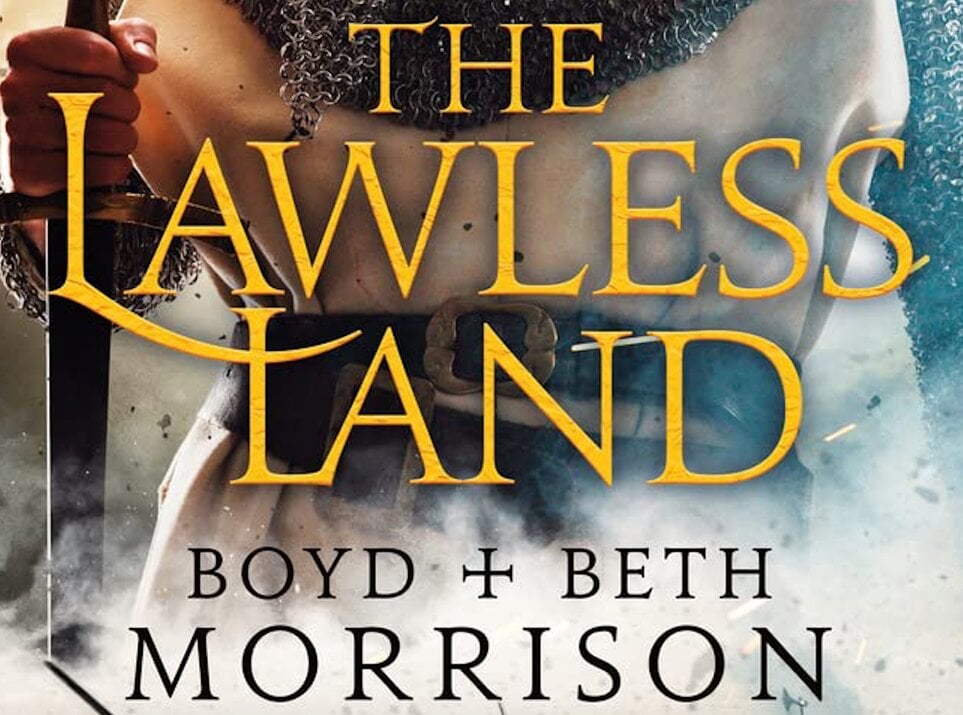 England, 1351. The Pestilence has ravaged the land. In these dark and dangerous times, the wise keep to themselves.

But Gerard Fox cannot afford to be wise. Robbed of his ancestral home, his family name tarnished, the young knight sets forth to petition the one man who can restore his lands and reputation.

Fox’s road will entangle him with an enigmatic woman, a priceless relic, and a dark family secret. It will also set him against one of the most dangerous men in Europe, and soon Fox is the only one standing in his way…

The Lawless Land is published by Head of Zeus and is now available in hardcover and ebook versions.

Mont-Saint-Michel rose out of the sea like something from a fantasy. Fox and Isabel had been able to see it from miles away, but now that they were directly across the tidal flats, the monastery looked even more spectacular and magical.

The abbey itself dominated the top of the rocky islet, its spires jutting into the sky. Stout stone walls below the peak’s Norman church were dotted with five levels of windows. A village clung to the sloped base of the island, rising all the way to the entrance of the abbey on the eastern end. The red roofs of the houses that were jammed together to maximize the use of the space contrasted with the blue-gray roof of the monastery. The shores were surrounded by formidable battlements that looked strong enough to repel any attack. The entire image was so reminiscent of an illumination in a romance story that Fox might have expected a dragon to swoop from the sky and land on the abbey’s pinnacle.

He had only been to the island once before. He couldn’t imagine the effort it took to build the place. Since construction began five hundred years ago, it must have taken generations to haul all those stones across the tidal flats from wherever they were mined. But the builders had achieved the desired effect. Pilgrims from across the continent—like the group of ten that idled nearby—flocked here to bask in its magnificence and invoke the powerful protection of Saint Michael the Archangel.

Fox and Isabel were both standing beside their horses. He looked over to see her staring at Mont-Saint-Michel from under her hood. The expression of wonder on her face somehow made her even more attractive.

“What do you think?” he asked.

She couldn’t tear her eyes from it as she spoke. “I never imagined I would see something so extraordinary.” Then she finally cast her gaze down at the vast stretch of sandy ground around the island. “How shall we cross?”

Although the tide was out, the flats were riddled with gullies and rivulets of water. The footing didn’t look very firm.

Fox pointed at a group of travelers, some on horseback and the rest on foot, picking their way toward them across the flats in single file from the island. They were being led by a large, boisterous man in a cloak. Even this far away, Fox could hear his booming voice, though he couldn’t yet understand what the leader was saying.

“We must wait for a local guide who knows the lay of the land.” He then nodded at the waiting pilgrims near them. “That’s why they have not attempted the crossing yet.”

When the group departing the island arrived and climbed up onto dry land, the guide waved goodbye and surveyed his next customers. He was a barrel-chested Frenchman with auburn hair, blue eyes, a thin beard, and a wide smile. When his eyes settled on Fox, the guide spread his arms and rushed over, grappling Fox in a hug fit for a bear, lifting him off his feet.

“Gerard, my old friend!” he bellowed. “I never thought I’d see your face again!” He planted a kiss on each of Fox’s cheeks.

Fox returned the embrace, and he couldn’t help but laugh at the clamorous greeting. “Henri, I knew it was you from the moment you set off from Mont-Saint-Michel. Your voice likely carries all the way to Paris.”

Henri let out a belly laugh. “That is why I am a guide instead of a monk.” He pushed Fox back, gripping his shoulders to look him up and down. “You seem stronger than the last time I saw you. Your injury has healed well since last year?”

Henri flexed his fingers, but Fox noticed he could barely make a fist.

“Not good for much now except raising a pint or tying laces,” Henri said.

“As long as you can still drink,” Fox said with a smile. “I wasn’t sure you would still be at Mont-Saint-Michel, but I’m happy to find you here. What of Youssef?”

“Oui, he is here as well. We are only here a year, and he has somehow maneuvered himself into becoming master brewer for the island.”

“After getting to know every tavern between here and Paris at his side, I’m not surprised he would find a way to make sure he was well supplied inside a monastery.”

“You would not believe the elixir he has concocted.”

“I look forward to sampling his ale.”

“Ale, he calls it.” Henri chuckled mysteriously, as if there were more he was not letting on. “In any case, we owe you a debt for making our positions here possible.”

“And that is why I have come. I’m afraid it is time to collect.”

“Anything for you, my friend. Neither of us would be alive were it not for your cleverness and courage. What brings you here?”

“She does,” Fox said, gesturing to Isabel. “May I present Lady Isabel of Kentworth.”

Isabel pushed the hood of her cloak down and smiled at him. Henri gasped aloud at seeing her face and glided over to her. He gracefully kneeled on one knee. “Damoiselle, que Dieu vous octroie la santé et bonheur.”

“May I inquire as to the purpose of such a beautiful lady’s visit?” Henri asked as he stood.

She glanced at Fox, who said in a lowered voice, “That will have to wait until we all meet with Youssef in private.”

Henri gave a mischievous grin and spoke for the first time in a whisper. “You have me intrigued.”

He turned and announced to the assembled group, “We must get going before the tide begins to roll in. My payment is one sou per person to guide you through the flats.”

One of the pilgrims, a boy not yet full grown, grumbled about the fee. “One sou each? Why should we pay that?”

“Because without my aid, you may never reach the island. The flats are teeming with pockets of quicksand. I’ve seen the ooze swallow an entire wagon. They’re nearly invisible, and it takes an experienced eye to spot them, so you would be wise to follow closely in my footsteps.”

The boy gulped and paid without further complaint.

Once he collected the payments, Henri began walking, with everyone else following him in single file. As he gave a history of the island and monastery, Henri peered intently at the ground and steered them around obstacles that looked no different from any other part of the sand to Fox’s untrained eye. Wind whipped their hair as it swept across the flats, but Henri’s thundering voice could still be heard. Halfway across, Henri looked into the distance and picked up the pace. Fox could see why. Water from the ocean was flowing toward them.

The tide was coming in.

“Not to worry,” Henri said. “We will make it to the island long before the sea does.”

The boy pilgrim must have been more worried about the incoming water than Henri because he walked even faster, passing by Isabel.

“You there!” Henri shouted. “Fall back in line.”

But it was too late. The boy suddenly collapsed. Since Isabel was nearest to him, she reached out to steady him, and the boy, shrieking in terror, would not release her grip.

He was not falling. He was being pulled into a quicksand mire. The more he thrashed, the quicker his legs were gulped down. The sand was already up to his mid-thigh.

The men and women in the pilgrim party added to the clamor by screaming and shouting, but none of them dared approach.

Henri rushed to him, careful to avoid the same trap, but Isabel had already managed to press the reins of her horse into the boy’s hands. She pulled hard on the bridle and said “Back, Comis!”

The horse responded by slowly retreating from the screaming boy. The teen was strong and held fast to the reins. He wasn’t being sucked down any longer, but neither was he rising.

“Boy,” Henri said in a suddenly soothing voice. “Boy, calm yourself. It’s the only way you’re coming out of there.”

The teen stopped screeching and nodded. “What do I do?”

“Swirl just one leg around.”

Henri made a mixing motion with his hand. “Like a mortar in a pestle. You see?”

The boy nodded and began moving his thigh in a circle, tight at first and then wider and wider until it was free of the muck. He was able to raise his foot out, but his boot remained in the quicksand. He still had hold of the reins.

The boy repeated the motion with his other leg, and soon Isabel was able to back Comis enough to take the boy to the safety of solid ground.

The boy dropped to his knees and began a prayer of thanks.

Henri pointed at Isabel. “You should thank her as well as you thank God, boy.”

The boy stood and said, “I humbly thank you, my lady.”

The boy blushed and got back into his place in line.

Henri continued walking and turned to Fox. “She’s clever, that one.”

“I am well aware,” Fox said in admiration not only of her quick thinking, but also her generosity and kindness. He’d never met a woman remotely like her. “Lady Isabel is full of surprises.”

To learn more, please visit the publisher’s website or buy this book on: