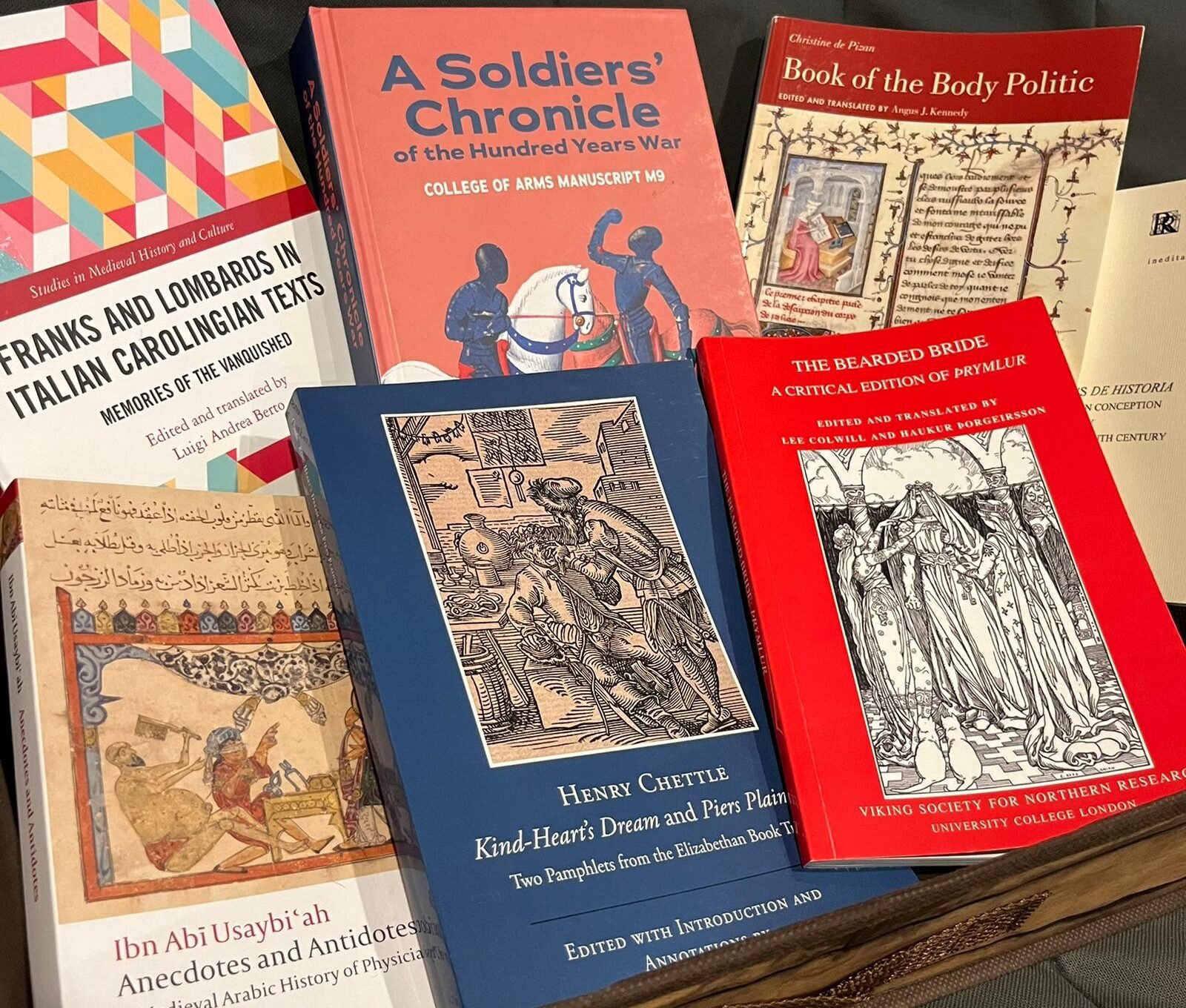 A Soldiers’ Chronicle of the Hundred Years’ War: College of Arms Manuscript M 9

Excerpt: Between folios 31r and 66v of College of Arms MS M 9 there is a chronicle, in French and on paper, covering the Hundred Years War from Henry V’s invasion of 1415 to the arrival of Joan of Arc at the siege of Orleans in May 1429. The chronicle is only known to exist in this one copy. Its incipit at the top of the first folio, in the hand of William Worcester (1415-1480/85), secretary of Sir John Fastolf (1380-1459), indicates that it was written for his master in the years of his death. At 18,217 words, the chronicle is relatively short, but it has several unique features. First, it is the only known English chronicle written in French in this period. Secondly, it is characterised by lengthy lists of people, French, English and Scottish, who participated in various battles and sieges, such names being presented in list format down the page, interspersed with narrative passages. Around 700 people are mentioned, along with around 230 places. Thirdly, the coverage of the English conquest of Maine from 1424 onwards, in which Fastolf was heavily involved, is much greater than that found in any contemporary chronicle, whether English or French.

Book of the Body Politic, by Christine de Pizan

Excerpt: The Body Politic, written for the dauphin, Louis de Guyenne, son of Charles VI, is a text with several claims to being regarded as “other.” It is the first political treatise to have been written not just by a woman, but by a learned woman capable of holding her own in a domain traditionally reserved for male commentators; it is a work that takes its place in the ‘mirror for the prince” tradition (stretching from classical antiquity to Erasmus and Machiavelli), but this particular “mirror,” or manual of government, as elaborated by Christine, addresses not just the prince, but nobles, knights, and the common people as well, attempting to promote (against a background of civil strife) the ideals of interdependence and social responsibility among the various members of the body politics. Although thoroughly rooted in the mind-set of medieval Christendom. It is a work that heralds the humanism of the Renaissance, with its emphasis on the study of classical culture, Roman civic virtues, the importance of learning and its diffusion, the role of the writer as moral guide, and the conviction (entirely compatible with Christian faith) that human beings can improve their earthly condition by their own efforts and by the practice of virtue. It is clear, therefore, that Christine works into the ‘mirror’ tradition quite distinctive features that reflect her own priorities as the “other voice.”

Edited by Donald A. Beecher and Grant Williams

Excerpt: This edition gathers together for the first time in one volume two oft-neglected yet lively and diverting pamphlets because they have so much to offer students of Elizabethan literature and its culture. Rhetorically colourful and generally unpredictable, Kind-Heart’s Dream (1593) and Piers Plainness’s Seven-Years Prenticeship (1595) pursue strikingly different yarns, each narrated by a skillful storyteller who knows how to seize and hold an audience.

You can also buy this book on Amazon.com

Franks and Lombards in Italian Carolingian Texts: Memories of the Vanquished

Excerpt: The goal of this book is to present how Carolingian Italy’s authors narrated the history of the Lombards, who had invaded Italy in 569, and portrayed Charlemagne’s conquest of the Lombard kingdom in 774 and the presence of the Franks in the Italian Peninsula during the ninth century. The different contexts and periods in which these writers composed their works allow us to focus on various aspects of this period and to highlight the different ways the vanquished remembered the Lombard past and Carolingian rule in Italy.

Anecdotes and Antidotes: A Medieval Arabic History of Physicians, by Ibn Abi Usaybi’ah

Exceprt: Ibn Abi Usaybi’ah was a Muslim, a practicing physician, and a man with a brilliant gift for describing fellow-doctors and the societies they served without prejudice to their religion or background. His book is somewhat ‘Herodotean’ in scope: a highly readable account of over 430 physicians, featuring their lives and training as well as their medical and other works, including four ‘autobiographies’ to which he had access.

The Bearded Bride: A Critical Edition of þrymlur

Excpert: This book is a new critical edition of the Icelandic rimur cycle þrymlur, which is preserved in a sixteenth-century manuscript but was probably composed around the year 1400. The poem tells the story of theft of þorr’s hammer by the giant þrymr and how þorr must dress as a bride to reclaim it. The story is also found in two other sources: the Eddic poem þrymskvida and a ballad known in different versions from Denmark, Norway, Sweden and the Faroe Islands.

Pomponio Leto’s De Historia: A Proto-Antiquarian Conception of History at the End of the Fifteenth Century

Excerpt: The Rossiano autograph of the De historia is divided into eighteen sections that aim to define the notion of history and the task of the historian while also providing a taxonomical classification of the genres of historical writing. Pomponio pursues the former purpose by discussing the stylistic prerogatives of history in sections such as those On history, On story, argument, discourse, and epistle, On the laws of history according to Cicero, in the second book of the De oratore, Truth is to be sought in history, What must be avoided in history, and On the utility of history.