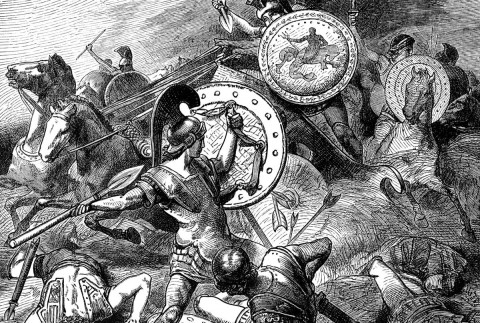 In the mid-fourth century BC, an experienced Greek general decided to spend his retirement doing something different – writing a book sharing his expertise with the general public. Having spent much of his professional life in the business of destroying cities, he wrote a manual to help civilians do the very thing that he had previously worked to make impossible. In his How to Survive Under Siege, Aeneas the Tactician aimed to walk civilians, including women and children, through the difficult art and science of defending their walled city from the besieging enemy – with or without a home army.

The existence of this manual complicates our picture of ancient warfare as the business of professional armies and generals. The book’s message that civilians could defend their city under siege is especially out of synch with the trends of Aeneas’ period, the fourth century, which was fast becoming the heyday of professional mercenaries, rather than the homegrown hoplite militias that dominated the previous two centuries of Greek warfare.

Such manuals were commonplace in the ancient world. Greek and Roman manuals survive on topics as diverse as agriculture, dating, horse-training, architecture, cooking and dream interpretation. But arguably no other subject attracted as much attention from ancient writers of manuals as war.

From the fourth century BC on, we know of scores of military manuals, quite a few of which survive. Some, such as Asclepiodotus’ Tactics (first century BC), Frontinus’ Strategems (first century ad), Aelian’s Tactics (second century), or Vegetius’ On Military Science (late fourth or early fifth century) were fairly general in scope, collecting information on a variety of topics broadly related to war. Other manuals focused on highly specialised topics. For example, Xenophon, a rough contemporary of Aeneas, wrote a manual On Horsemanship, in which he provided astoundingly detailed advice on every aspect of acquiring and training a great war horse. (The shape of a horse’s rear end is a key predictor of its success or failure as a war horse, for example.)

Siege warfare was a reasonably popular subject of military manuals. In addition to Aeneas, others who wrote manuals on this topic include Philo of Byzantium (third century BC) and Apollodorus Mechanicus (second century). The subject received further attention in military manuals in the Byzantine period. But, while ancient military manuals as a genre were, in reality, read (and sometimes written) largely by armchair historians with a love for the military arts, they at least maintained the pretence of teaching real battle tactics to military personnel. Aeneas’ manual holds the distinction of being the only manual that directly addressed non-combatants and aimed to teach them the art of survival in the type of war that did not discriminate between civilians and combatants.

Should a walled city be under siege and an improvised system is needed, Aeneas has the following recommendations. First are the practical elements. Men of fighting age should be organised into groups and each group assigned a portion of the wall and the city to patrol and defend. The groups should also be assigned specific times to guard and rest. Married men with strong ties to the community are the best people to trust with leadership positions in these groups.

Issues related to trust get perhaps the lion’s share of Aeneas’ attention. In a city under siege, factions and dissent proliferate and it is inevitable that someone might be tempted to surrender outright and be done with it. As a result, no one can be trusted and it is best to organise the defence accordingly. Lamps should not be lit at night, therefore, in case their light is used to signal the enemy.

Checking the integrity of the city gate, its bar and its locking mechanism constantly is essential as well. Aeneas provides a dizzyingly long array of methods by which individuals in historical sieges have been known to sabotage the city gates, betraying the city to the enemy from within. While this advice may appear to verge on paranoia, it is worth noting that countless sieges in world history ended not because of the prowess of the besieging armies, but because someone opened the gate from the inside.

While defence is Aeneas’ chief focus, he includes some creative advice to frighten the enemy away. He recommends using cattle, which would have been brought into the city from the countryside for the duration of the siege: get the cows drunk, tie bells to them and drive them into the enemy camp in the middle of the night. This surprise tactic may be just enough to scare the enemy into leaving.

Finally, to fool the enemy into thinking that a city’s home defence army is much larger than it really is, Aeneas suggests dressing the women in pots and pans for the illusion of armour and having them parade atop the city walls. He does, however, warn against letting them throw anything, ‘for you can tell a woman a long way off by the way that she throws’.

Aeneas’ manual may have proven successful, but it turned out to be less necessary for his target audience than he expected. Only a little over a decade after he published it, the Macedonian king Philip defeated the allied Greek city-states and unified the Greek world into a single kingdom under his rule.

Nevertheless, the most enduring legacy of Aeneas’ manual lies in reminding us of the impact of war on real people, from antiquity on, who found themselves defenceless in a city under siege. This perspective challenges the glamorous view of military history that is otherwise so easy to embrace when we focus on war as a contest between armies of men in uniforms squaring off on the battlefield. Reading such documents is a reminder that studying war in any period ought to inspire in us compassion for the vulnerable, rather than admiration for the haughty.

Nadejda Williams is Professor of Ancient History at the University of West Georgia.