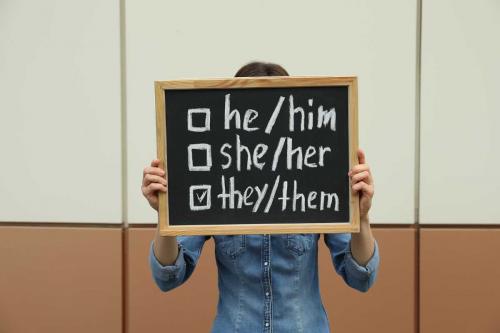 Using the correct pronouns and honorifics in the workplace has become an increasingly important part of maintaining an inclusive workplace. At the same time, the sensitive nature of this trend and the many variations of pronouns and honorifics in use may leave employers confused as to how to accomplish that goal. Moreover, employers may be concerned with how to comply with employees’ requests in an ever-evolving space and with the increasing use of nonbinary pronouns.

Individuals have traditionally identified with binary sets of pronouns based on male and female gender expressions (i.e. he/him/his and she/her/hers). Increasingly, many individuals are expressing that they do not identify as either a “man” or “woman.” An estimated 11 percent of individuals who identity as LGBTQ in the United States (i.e., approximately 1.2 million people), identity as nonbinary, according to a recent study. The vast majority (76 percent) are between the ages of 18 and 29, the study found.

The issue has particular significance for employers since the June 2020 decision by the Supreme Court of the United States in Bostock v. Clayton County, Georgia, which found that discrimination against gay and transgender individuals is a form of sex discrimination under Title VII of the Civil Rights Act of 1964. The high court reasoned that an adverse action against an individual because the individual is gay or transgender is a form of discrimination based on sex “because it is impossible to discriminate against a person for being homosexual or transgender without discriminating against that individual based on sex.” However, the Court left open several questions on how the ruling applies to sex-segregated restrooms, dress codes, grooming standards, and pronouns.

Following the decision, the Equal Employment Opportunity Commission (EEOC) issued new guidance on June 15, 2021, taking the position that “intentionally and repeatedly using the wrong name and pronouns to refer to a transgender employee could contribute to an unlawful hostile work environment” in violation of Title VII. This suggests there could be potential liability for employers who refuse to use a nonbinary employee’s correct pronouns. Further, while Title VII does not cover every employee in the United States, many state and local laws, such as California’s Fair Employment and Housing Council’s regulations and the New York City Human Rights Law (NYCHRL), provide similar or greater protection from gender identity discrimination.

It is increasingly becoming a commonplace practice for companies to permit employees to include their pronouns in their email signatures or on their social media profiles. This trend might just be the start. In light of the evolving movements in these areas, some employers may be struggling with how to support nonbinary individuals in their workplaces.

Some employers will take the stance that it is important to provide safe spaces for employees to identify their pronouns without pressure or the worry of retaliation in order to maintain an inclusive environment. Employers may further want to consider additional training for supervisors and other employees on how to handle everyday interactions regarding pronoun use. For example, employers may want to encourage employees to be comfortable with apologizing and correcting themselves if the wrong pronoun is used. This may be an especially important subject if an employee had started at the company using one set of pronouns and later realizes a different gender identity during the course of employment. A diversity, equity, and inclusion (DEI) committee or diversity liaisons can guide employers in facilitating these conversations.

At the same time, employers are faced with the tension of ensuring respect for each individual’s privacy. In this regard, employers may want to be conscious that individuals generally will not want to be into a situation in which they must choose between using a nonbinary pronoun or facing inappropriate questions about their choice from management or co-workers. It may be necessary to keep pronoun sharing optional and to encourage employees to default to gender-neutral language where possible.

The Biden Administration, in March 2022, announced a series of federal government policy changes to allow U.S. citizens to identify as nonbinary, including allowing U.S. citizens to select an “X” gender marker on their U.S. passport applications. In accordance, the EEOC also announced that it would provide the option to use a nonbinary gender marker in the filing of a charge of discrimination. Several states have further allowed the use of a gender-neutral marker on state identity documents, including drivers’ licenses. Given these developments, employers may also want to consider using gender-neutral language in communications and updating their human resources demographic record-keeping procedures to allow for employees to be identified as nonbinary or with a gender-neutral marker.

The Bostock decisions and the proliferation of state and local anti-discrimination laws may require that employers make efforts to allow employees to share and be addressed by nonbinary pronouns. This could be critical in employer recruiting and retention with younger generations entering the workplace that are increasingly comfortable with expressing their nonbinary gender. Also, it is clear that accurate or appropriate pronouns and honorifics will continue to change. Employers may want to remain ready to adjust in this rapidly evolving space in order to provide inclusive environments and keep workplaces free of harassment and discrimination.

Companies seeking to create more inclusive workplaces for nonbinary individuals can find further information and guidance from a number of organizations that provide educational resources and technical assistance.