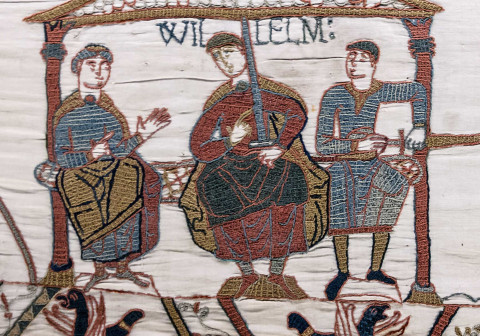 For many, the Normans epitomise the medieval period: known today for their actions as conquerors, castle-builders, kings and warriors, our perceptions of this most prominent of medieval peoples continue to shape our understanding of European history between 900 and 1200.

Historians have long attempted to understand Norman identity. In Judith Green’s new book, she employs a narrative structure that echoes previous histories of the Normans, outlining the foundation of the Norman duchy in the tenth century, followed by the first constructions of ‘Normanness’ from the 11th century onwards. She then moves on to examine the actions of the Normans beyond the duchy in the Mediterranean and in Britain and their various contributions to the Crusades. Green is excellent on Norman governance, its relationship with the Catholic Church, its interactions with neighbouring cultures and its peoples, as well as their role as builders of the many monuments that observers may still encounter across the European landscape.

Writing in the 12th century, the English chronicler and Benedictine monk Orderic Vitalis described the Normans as an ‘untamed race’ who were ‘innately warlike and bold’. Green argues, however, that while Normandy was indeed ‘turbulent and violent’, it was not unique in this. What the Normans did have at their disposal were opportunities for self advancement and the writers to record their successes. Norman families patronised writers who wrote stirring narratives of their peoples’ dominance that permeated contemporary and, from the 19th century, also modern thinking. The Norman identity that 20th-century audiences inherited from E.A. Freeman’s 1867 The History of the Norman Conquest of England or Charles Kingsley’s 1866 novel Hereward the Wake was grounded in the acceptance of depictions by medieval authors such as Dudo of Saint-Quentin, William of Jumièges and Orderic Vitalis. The depiction of Normans as warrior-conquerors is, writes Green, a ‘leitmotif running through eleventh and twelfth century narratives’ that has remained hugely influential ‘until comparatively recently’.

Today, historians often struggle to understand medieval perceptions of group identity. We are sceptical of texts that offer the views of the political and intellectual elites who were commissioning and reading them, but which tell us almost nothing of how the wider population might have understood labels such as ‘Norman’ or ‘Anglo-Saxon’, ‘Anglo-Norman’ or ‘Italo-Norman’. How can the corpus of contemporary narratives that touch on the topic of ‘Normanness’ be used alongside architecture and art to help us understand something as complex as group identity – especially when every source represents the perspective of one individual?

Green’s book is mostly a story of Norman men acting as warriors and rulers. For those who want to learn more, she offers an impressive compendium of endnotes and an exhaustive bibliography; these alone should ensure that the book becomes the go-to index for Norman scholarship in the next decade at least. And, if the proposed loan of the Bayeux Tapestry to the United Kingdom materialises (it is currently in doubt owing to the fragile condition of the embroidery), then Green’s book might yet find a wider audience interested in understanding the Norman people, whoever they might really have been, and regardless of what Dudo, William and Orderic Vitalis would have us believe.

Charles C. Rozier is Lecturer in Medieval History at the University of Durham.