A group of nine mysterious bones unearthed in Kyiv years ago have been identified as walrus remains that originated in Greenland. The nine pieces of bone were excavated in 2007, 2008 and 2011 and were stratigraphically dated to the mid-12th century. It wasn’t immediately clear what animal they came from and researchers have only just determined that they were indeed walrus tusks.

Samples were successfully extracted from seven of the nine bones and subjected to staple isotope and DNA analysis. Results found the ivory all came from the Atlantic walrus which loved from Greenland to the Canadian Arctic. The evidence of human processing on the bones confirmed the western origin.

When the walrus tusks were exported, they were still attached to a piece of the snout bone. Remains of this bone are what the archaeologists found. Walruses have extremely strong muzzles, since they like to support their entire body weight on their tusks when they relax. In order to make it easy to break off the tusks, the muzzle was therefore “thinned” before export. This was done in a particular way in Greenland. 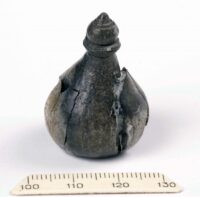 Walrus ivory was a prized raw material in the Middle Ages, particularly in northern Europe. Elephant ivory was a luxury import and the disruption of ancient trade networks made locally-sourced walrus teeth even more valuable. Master carvers transformed walrus ivory into luxury game pieces like the Lewis Chessmen or masterpieces of religious art like the gilded and painted Crucified Christ.

Walrus hunting was immensely profitable. (A 14th century tax document records a single tusk was worth the equivalent of a year’s average income in Norway.) Indeed, it was such a cash cow that it was one of the main drivers for the Norse settlement of Iceland in the 9th century and, once they rapidly obliterated that population of walruses, the settlement of Greenland in the 10th century. Walrus remains are so widespread in the medieval archaeological layers of Greenland that the Norse settlers were all involved in the walrus ivory trade, either as hunting crews who spent three months of the year trawling the Arctic Sea for their quarry or in the extraction and processing of the tusks and teeth.

Kyiv was a very important trading city in the Middle Ages, centrally located on the banks of Europe’s fourth longest river, the Dnipro, where traders from the north and south met.

“In the 12th century, Kyiv was a mediaeval metropolis and the capital of a state with an economy built on trade. Archaeological research shows that the largest amount of imported finds stem from the end of the 11th century and the 12th century,” says Khamaiko.

“What we’ve now discovered about the walrus bones shows that Kyiv was an unusually large trading centre, with goods flowing through from distant parts of the world.”

The research team’s report of the findings, the excellently named Walruses on the Dnieper, has been published in the Proceedings of the Royal Society B and can be read in its entirety here.