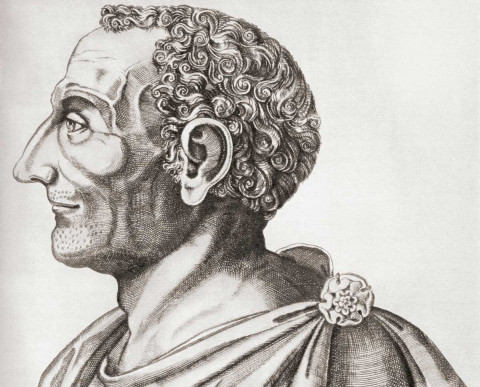 What I love most about Livy’s Ab urbe condita is that it is not all there. In its day it was monumental, of course. Written in instalments over almost 40 years, it covered the entire period from the legendary foundation of Rome to the death of Drusus in 9 BC. Had Livy lived longer, it is possible that he would have continued the narrative down to his own day. It was an extraordinary piece of work. Even before Livy had finished writing, contemporaries hailed it as a masterpiece. Though a little prolix in places, it was distinguished by its relentless detail, its acute sensitivity for human emotion and what Quintilian called its ‘milky prose’. No other Roman historian even came close. So high was Livy’s renown, in fact, that he may have helped drive his sources into obscurity. Of the annalists on whom he relied for information, almost nothing has survived – not because they suffered from any particular fault per se, but perhaps partly because readers may have felt that, after Livy, they were superfluous.

Yet Livy may also have been a victim of his own success. Such was the popularity of Ab urbe condita that some enterprising soul soon produced an epitome – just as, today, a Tolkien enthusiast might write a ‘Bluffer’s Guide’ to The Lord of the Rings. This epitome was then further abridged to produce the so-called Periochae. Short to the point of brusqueness, these summarised the main topics covered by each book and were probably intended to serve as a rudimentary table of contents. But so convenient did some readers find the Periochae that they actually preferred them to Livy’s original. In the first century AD Martial wryly intimated that, since his bookshelves were not big enough to hold all of Livy, the shorter work was the more practical. Combined with shifts in literary fashion and the usual vicissitudes of time, this may have contributed to the loss of large sections of Livy’s history. Of its 142 original books, only 35 remain in reasonably complete form.

In some ways, Livy’s fate is a neat encapsulation of the problems with which modern historians have to grapple. Since at least the mid-19th century it has been recognised that the task of history is to determine what actually happened in the past – or, as Leopold von Ranke memorably put it, wie es eigentlich gewesen ist (‘how it actually was’). To do this, we first need facts – that is to say, information that can be verified. This can sometimes be tricky. After all, there are plenty of events for which we have only a single witness. But this is just the start. On their own, facts are simply isolated details. It doesn’t mean all that much, for example, to know that a battle was fought at Hastings in 1066. What we are really interested in is how facts fit together to reveal broader patterns. Rather than merely taking them at face value, as it were, the historian has to interpret them to make an argument – transforming them, in effect, from mere data into evidence. And this is where texts like Livy’s Ab urbe condita become so important. Documents are our main source, both for facts themselves and for insights into how those facts might fit together. Livy, for example, tells us not only that the Roman plebs marched out of the city en masse in around 494 BC, but also that they did so in protest at the Senate’s increasingly harsh decrees about the punishment of debtors, who tended to come from the lower orders.

Documents aren’t always as helpful as we’d like, however. While they might be chock full of details and tell a convincing ‘story’ about the past, there is no such thing as an ‘objective’ text. They are, at root, a representation – rather than a mirror – of reality. Each text is written from a specific point of view, with a specific audience in mind, often in pursuit of a specific purpose. Livy is no exception. For all his scrupulousness, he was an ardent republican and saw the writing of history as an essentially moral enterprise, which coloured his presentation of both individual events and of the connections between them. If modern historians are not careful, there is a danger that they might unconsciously allow these same biases to creep into their own work.

Needless to say, this is something of which historians are keenly aware. Great effort is devoted to establishing what motivations and preconceptions might have shaped the perspectives of a particular text. This does not mean that we can somehow strip away any biases to reveal a ‘clear’ view of the past, of course, but it does allow us to adopt a suitably critical stance towards our documents and the connections they suggest. Yet, even if documents are fated to remain mere representations of the past, that is historically significant in itself. As a testament to mentalities rather than objective connections they can still be of great value. Excavating the broader social mindsets underpinning an author’s particular bent, however, can be tricky and often requires some sort of theoretical framework, some preconception of how human beings think, feel and relate to one another. And such assumptions – no matter how slight, or well reasoned – are always open to question.

There is also a more fundamental problem with documents. Despite the abundance of material we have, the documentary record is still fragmentary at best, as the fate of Livy illustrates. In many cases, survival is a matter of chance. To take just one example, that the German scholar Constantin von Tischendorf rescued the leaves of the Codex Sinaticus – a fourth-century manuscript of the Greek Bible – from a bin in St Catherine’s Monastery in Sinai was nothing more than luck. But survival can also be the result of conscious decisions. Just as readers chose not to read Livy as much as before and scribes decided not to make additional copies, so archivists choose which documents to preserve or destroy, and political and religious leaders have often banned, or burned, certain books.

As Richard Evans, the former Regius Professor of History at the University of Cambridge, has noted, this makes the practice of historical research rather like ‘doing a jigsaw puzzle, where the pieces are scattered all over the house in several boxes, some of which have been destroyed, and where once it is put together, a significant number of the pieces are still missing’. This doesn’t mean that we can’t do the puzzle, of course. Even if we don’t have all the pieces we can still make a reasonable guess at how most of them fit together. But there is still no getting around the fact that so much loss severely limits our ability to connect, or even establish, facts about the past.

But what about the missing pieces themselves – the pieces of the jigsaw that haven’t survived, the material remains that have been burnt, lost or destroyed?

This is arguably where the real fun begins. While historians rightly devote the greater part of their professional lives to filling in the gaps (or at least sidestepping them), the fact that gaps exist at all is significant in itself. As Graham Greene intimated in his short story ‘The Destructors’, destruction – or even abandonment – can be seen as an attempt at creation. However much of a negation it may be, it serves to shape either the present or the future and is informed (consciously or not) by prevailing assumptions about the world and our relation to it. As such, even the loss of a document – or part of a document – can be revealing.

That scribes stopped copying Livy, while continuing to churn out the Periochae, for example, tells us a great deal about the culture of reading and the growing importance attached to practicality over completeness. What an archivist chooses to discard is informed by underlying beliefs about what future readers might – or should – need; what books a totalitarian government burns are determined by conceptions of ‘normalcy’, danger and control; and what unpublished works an author destroys is decided by how they perceive their legacy, or the strength of their aesthetic scruples. Even accidents can teach us something about attitudes towards knowledge and conservation.

Yet if the loss of a document – or some other, comparable piece of testimony – is telling, its absence is even more so. Simply by not being there it can take on a life of its own. What reactions that non-existence provokes can themselves be instructive, not only of attitudes towards what has vanished, but also of much wider phenomena.

Take Livy’s Ab urbe condita. After Symmachus commissioned his recension in the early fifth century, no one is known to have read – or even seen – a complete copy of Livy’s work. Although some books were still circulating in manuscript form in the German lands 600 years later, the greater part of it had already been lost. When interest in Livy revived in the early 14th century, the consciousness of the loss was acute. Readers, enchanted with his style, were hungry to read more; yet they were frustrated that so little remained. To overcome this, they had to get creative. As Michael Reeve and others have demonstrated, some unknown scholars had in all probability already begun collating the disparate manuscript traditions of several surviving books. But it fell to the Italian humanist Francesco Petrarca – better known in English as Petrarch – to identify a manuscript of the fourth ‘decade’ (or block of ten books), which had been brought to him by a friend, and to unite it with the first and third for the first time since Antiquity. This version was then passed down to Lorenzo Valla, who used it as the basis for criticising the emendations that Bartolomeo Facio and Antonio Beccadelli had proposed to books 21-26, helping in turn to foster an enthusiastic search for manuscript copies of other books in ecclesiastical libraries throughout Europe. This fuelled the growing interest in the Latin classics and necessitated the development of new techniques of textual criticism, which were later to become pivotal to wider debates about authenticity and historicity. While the loss of much of Livy’s Ab urbe condita robs us of a great deal of information about the Roman past, therefore, its absence nevertheless provides us with fascinating insights into the intellectual world of the early Italian Renaissance and beyond.

There are innumerable such missing pieces. Abraham Lincoln’s ‘lost speech’; Jules Verne’s diary; Milena Jesenská’s letters to Franz Kafka; the missing books of the Old Testament; the Maya codices destroyed by the conquistadors – the list is endless. Each of these might have been invaluable to the historian. But, simply by not being all there, they can tell us quite different – and even more remarkable – stories. It is the hidden history of these missing pieces – or, known unknowns – that this new column will explore in months to come.

Alexander Lee is a fellow in the Centre for the Study of the Renaissance at the University of Warwick. His latest book, Machiavelli: His Life and Times, is now available in paperback.