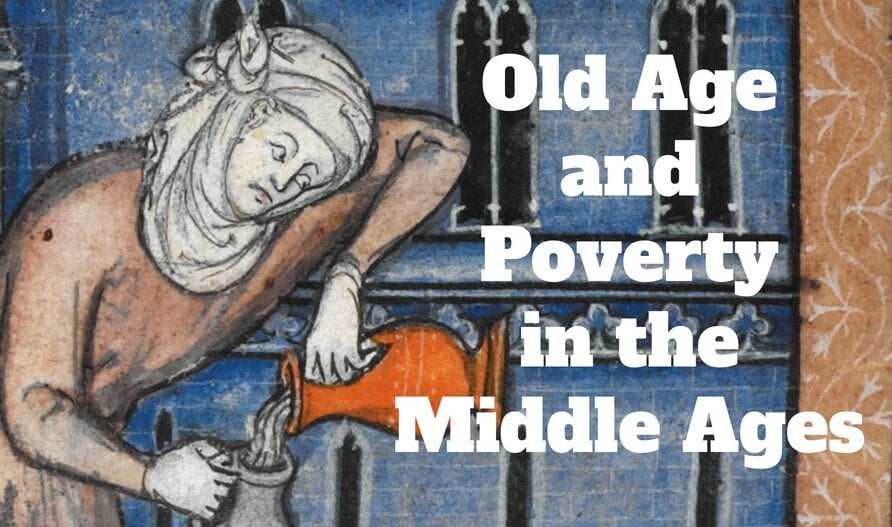 What happened to elderly individuals deprived of resources and family?

In the Middle Ages, the elderly usually turned to their relatives to find support and comfort in their old days. Those with resources but no families could donate their goods to strangers in exchange for help and company. But what happened to elderly individuals who had no family and no financial resources? On the one hand, historians have found evidence, even if sparse and difficult to precisely document, of individuals offering support to vulnerable people of their community. These benevolent actions were fuelled by caritas, the love of one’s neighbour, typified ideal relationships between Christians. On the other hand, charitable institutions such as hospitals and almshouses supported those in need, including the elderly.

It was not uncommon for the affluent members of society to ensure that their servants would receive a form of pension in old age. The Duke of Burgundy’s almoner accounts show a specific category of alms reserved to the “old servants” of the Duke. Bequests and alms like these illuminate the Christian duty of charity, here expressed towards aging and poor individuals who were members of one’s household. Likewise, generous wealthy individuals sometimes performed deeds of charity toward isolated elderly individuals. Clare of Pisa, beatified in the nineteenth century, was a wealthy widow from the turn of the fourteenth and fifteenth centuries. She had befriended an old woman, visited her often, and nursed her in her dying days.

Solidarity and support between unrelated individuals also extended horizontally, between equals. Gender, vulnerability, and the shared experiences of widowhood strengthened female friendships and networks of support. In the later Middle Ages, a group of widows from Sardinia who had established a strong friendship decided to move together to Barcelona, where they shared a house and supported each other and their children. Meanwhile, in that same city, records of the alms distributed by a parish charity show that several ill and poor widows lived in other women’s houses where they received care. These examples highlight the role of community members in providing aid for each other. But for the elderly deprived of financial means and network, charity was the last recourse.

The poor and elderly

Contrary to common belief, charity was not indiscriminate in the Middle Ages, especially in the wake of the late medieval crises, when public authorities took a repressive stance towards beggars. Private and public alms were dedicated to impoverished individuals seen as “deserving,” such as orphans, workers, widows, unwed girls, or the sick of the hospitals. Old age did not constitute a proper category of poverty, but the elderly could fit within the traditional parameters of deserving poverty due to physical weakness and inability to work. The elderly in need were therefore among the beneficiaries of charitable practices and institutions.

In the eleventh century, the monastery of Cluny distributed daily alms to the poor, among them children, widows, people with disabilities, and elderly individuals. In the thirteenth century, Cistercian monasteries reserved their alms at the peak of the harvest season for those who could not work: pilgrims, children, people with disabilities, and the elderly. Members of guilds and fraternities supported each other in sickness and death, providing at least temporary relief to their elderly companions and their widows.

The “poor widows,” for instance, were heavily featured in late medieval sources. Testamentary bequests and almshouses regularly provided for the poor widows. The records of the late medieval Florentine charity known as the Orsanmichele, which was run by a confraternity, show that elderly women received 23% of the alms issued in 1356. In the second half of the fourteenth century, the endowment of poor girls and the relief of the sufferings of the (elderly) widows were the two main categories of poor the confraternity tended to.

The “feminization” of Orsanmichele’s alms during the fourteenth century is linked to contemporary concerns about female poverty and to the legal and financial vulnerability of young and old women, which became greater after the Black Death. In Paris too, the later Middle Ages witnessed a greater concern for older women (over older men) which reflected patterns of need and poverty. Female poverty warranted specific institutions dedicated to the relief of their misery. In 1342, Paris counted ten shelters for poor widows, or “good women.” In England, the founding of almshouses reserved to women rose drastically after the Black Death.

Hospitals and Almshouses for the sick and poor

Medieval hospitals welcomed all poor, including the elderly. Hospitals were usually run as a religious community where the brethren fed, dressed, housed, cared for, and accompanied their residents to their afterlife, by providing religious services and burial. Medieval cities and towns also counted their fair share of almshouses, which provided dwelling for the poor and basic support. Almshouses were usually smaller than urban hospitals and operated under a lighter religious frame. But both hospitals and almshouses provided long-term accommodations for their guests and the basic necessities of life.

Although hospitals were only occasionally specialized in the care of the elderly, some of them, such as the hospital Ste.-Avoye in Paris, were founded to specifically shelter older widows. This hospice was founded in 1283 by a wealthy widow and the treasurer of a parish, and was dedicated to sheltering up to forty widows aged fifty or older. Another example is the Orbatello Hospital of Florence. Established in 1370, the Orbatello could accommodate more than 200 guests, most of which were elderly women. Likewise, several English almshouses founded between 1350 and 1539 were intended for the poor and elders. In 1426, for example, a man named Robert Veel founded an almshouse in Somerset with a capacity of five to seven residents, who should be “poor men, infirm, broken down with old age, and unable to work.”

It was also possible to join a hospital as a caregiver and then retire into the institution. These individuals, called “donats” in the south of France, entered a hospital, often in old age, serving in exchange for their maintenance until their death. These arrangements became more and more common from the fourteenth century onwards. In 1437, Guillaume Ferré, an old priest from Normandy who described himself as “ancient,” “unable to work,” suffering from “debility and weakness,” and a lack of “self-government,” gave himself to the Saint-Esprit hospital in Paris to receive fulltime care. In exchange for his lodging and maintenance – and despite his current state – Guillaume offered to work as a chaplain at the institution.

Caring for elderly parents was a religious duty. But in practice, not everyone had children and not all adult children were willing or able to undertake this responsibility. Caring for elderly parents or relatives came at a financial cost that some could not afford. Old age, moreover, was often a corollary to economic vulnerability, placing the elderly among the “deserving” poor. Hospitals and almshouses sheltered the old poor of the towns and cities of medieval Western Europe. Elderly widows were specially protected by charitable practices, because widowhood, in itself, was viewed as a major factor of vulnerability. Worthy of alms and charity, old widows took a larger place in charitable practices in the post-Black Death era, at a time when the elderly poor faced even grimmer prospects.

Shahar, S., Growing Old in the Middle Ages: ‘Winter Clothes Us in Shadow and Pain’ (Routledge, 1997)