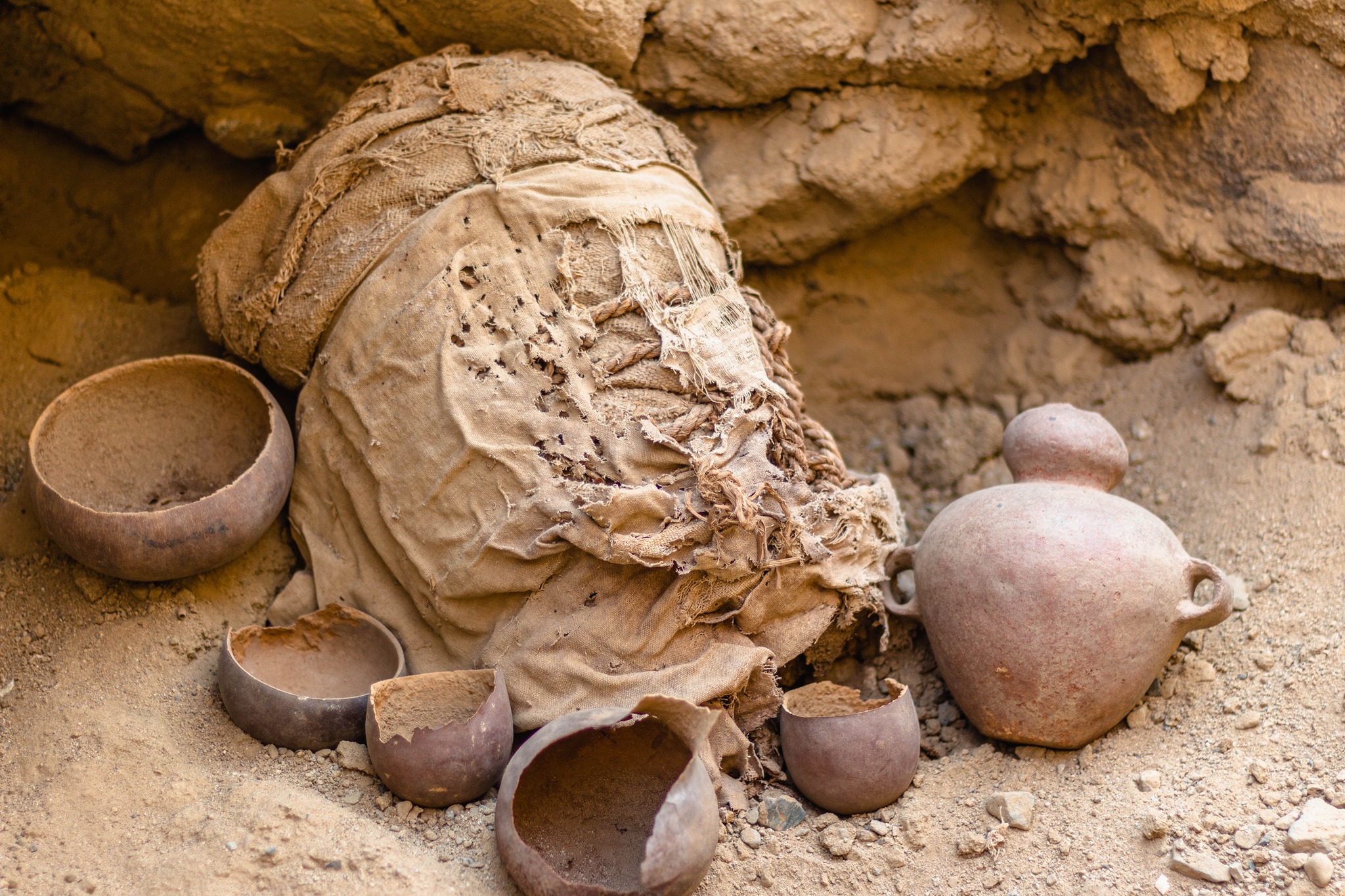 The mummies of six children have been discovered in the tomb of the pre-Inca nobleman found at the Cajamarquilla archaeological site east of Lima, Peru, last November. Archaeologists found the set of six funerary bundles around the entrance of the tomb, plus scattered non-mummified skeletal remains of seven adults, at least three of them women, and one more child. These burials are believed to have been sacrifices. Dating to between 1,000 and 1,200 years old, this is the oldest mass sacrifice of children ever been found in Peru.

The man discovered last year was first estimated to be about 20 years old when he died, but follow-up examinations indicate he was older, between 35 and 40 years of age. His skull shows evidence of artificial cranial deformation. He was mummified in a tight crouch position with his hands over his face, bound in cloth and tied up with intricately knotted rope. The large tomb, just short of 10 feet long, and grave goods found with the bound mummy indicated he was someone of high status in Cajamarquilla society. The discovery of sacrificial human remains confirms he must have been a member of the elite, perhaps a ruler.

The children were deliberately mummified and cocooned tightly in cotton bundles tied with ropes, albeit in a different style of binding than the nobleman’s mummy. They may have been relatives and/or servants of the man in the central burial, and were likely sacrificed to accompany him to the afterlife. Inside some of the clay pots buried in the tomb are animal offerings — remains of guinea pigs, fish and camelids — and plants, including chili seeds, purple corn and peanuts.

Cajamarquilla was an important pivot of commerce between coastal Peru and the Andean highlands before the arrival of the Incas. Only a tiny fraction of the 170-hectare ancient mud brick city has been excavated, but recent discoveries indicate it was a prosperous, multi-cultural city with a population between 10,000 and 20,000 of diverse ethnicities from different areas of Peru.

The discovery occurred a few days ago in the area outside the tomb of the Cajamarquilla mummy, where extension work is being carried out on the excavations of the research project led by the bachelor Yomira Silvia Huamán, for her undergraduate thesis in Archeology of the National University of San Marcos (UNMSM), with the collaboration of archaeologists from the San Cristóbal de Huamanga University, Ayacucho.

“This finding will enrich the investigation that began last October, because, unlike the Cajamarquilla mummy found wrapped in ropes, the conditions of these 13 people show a change in traditions, a more coastal ritual,” Yomira said, after specifying that at first glance can be identified or will ratify the hypothesis that Cajamarquilla has been a place of cultural clash between people who came from the mountains with those who came from the coast.

All of the archaeological materials have been transported to the UNMSM laboratory. Select samples will be sent to laboratories in other countries for specialized DNA, strontium isotope and radiocarbon analysis.