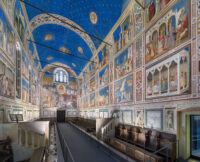 Last year, a cycle of 14th century frescoes in eight different buildings in the ancient northern Italian city of Padua were added to the UNESCO World Heritage List. The frescoes cover 40,000 square feet of walls and ceilings painted by six artists over 95 years in both secular and religious buildings. What unifies them is their visual style that marks a turning point in the understanding of spatial relations and optics in European painting. These frescoes incarnate the shift from the abstract formality of Byzantine style to the naturalism and perspective of Renaissance painting.

The most famous of the sites is the Scrovegni Chapel, frescoed by Gothic master Giotto di Bondone. This is considered the greatest surviving example of his work, and not just in the sense that it is in vividly brilliant condition, but because in this pictorial cycle he introduced realistic portrayals of human emotion, spatial perspective and trompe l’oeil architectural effects. It would become a model for his contemporaries and the artists that followed him.

In just two years between 1303 and 1305, Giotto covered the entire internal surface of the chapel with 39 scenes from the Life of the Virgin and the Life of Christ divided into three rows and six columns of panels, plus the arched space of the eastern wall above the altar. The first six are scenes from the lives of Joachim and Anne, Mary’s parents, who actually aren’t in the canonical Bible, only in the apocrypha. In an art historical first, Giotto painted them kissing.

The fourth row on the bottoms of the nave walls feature smaller panels depicting the Seven Vices and Seven Virtues in a faux marble stone finish. As with the Sistine Chapel, the long view of the nave culminates in a floor-to-ceiling fresco of The Last Judgement on the entire western wall. The ceiling is a deep blue firmament dotted with gold stars and roundel portraits of the Apostles, prophets, saints, Jesus and Madonna and Child. 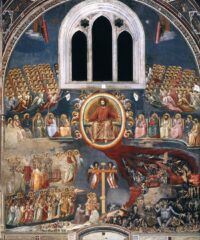 The context behind the art is also of great historical significance. Giotto was commissioned to paint this chapel by a banker, Enrico Scrovegni. Patrons of art on this scale were typically high clergy or royalty and aristocracy. The Scrovegni Chapel commission marked a significant shift in the social and economic status of burghers, one made explicit by Giotto’s including of the banker kneeling at the foot of Christ in The Last Judgement, firmly on the side of the Heaven-bound. He holds a model of the chapel itself, making an offering of it to God. With this, the patron was no longer a king or Pope, and he was no longer an extra making a cameo appearance in a devotional scene. He was a central figure in the very thick of the action.

Another one of the eight buildings is even more spectacular an architectural survival as it is a masterpiece of frescoing. The Palace of Reason served as Padua’s marketplace, town hall and civil court. The ground floor was completed in 1219 and is the oldest covered market in Europe, still used as such today. Two loggias were added on top of the ground floor between 1306 and 1309, and a large wooden roof shaped like the overturned hull of a ship. It was built with trusses, liberating the interior from cumbersome central columns. Originally divided into three chambers, the great hall (known as the Salone) became a single wide-open space 267 feet long when the partitions were removed after a devastating fire in 1420.

The original frescoes painted by Giotto on the vault of the Salone depicting astrological motifs, allegorical figures and religious scenes were destroyed in the fire. The room was repainted by Nicolà Miretto and Stefano da Ferrara based on the visible traces of Giotto’s originals. More than 300 panels depict the stars, their effect on human character and events, religious subjects, animals and the civic magistrates — judges, notaries — who worked in that space.

In pride of place inside the Salone is a black porphyry drum on a stepped square base. This is the infamous Pietra del Vituperio (Stone of Vituperation) where insolvent debtors were forced to sit, garbed only in their underwear, and repeat three times “Cedo Bonis” (I give up my goods). He was then relieved of his burden of debt, but had to leave the city immediately. If he returned without permission from his creditors, he would be put back on the Stone of Vituperation and dowsed with three buckets of cold water.

This was the merciful approach bankruptcy; previously debtors in Padua had been imprisoned for life. It was Saint Anthony who successfully pleaded with municipal authorities to stop giving life sentences for debt just before his death in 1231. After the good friar died, however, the city added the Pietra del Vituperio to the bankruptcy process. The stone has been in the Salone ever since, although it hasn’t been used for its original purpose in a long time.

The city has created a single-ticket track with accompanying app dubbed Padova Urbis Picta (Padua Painted City) for visitors to experience all eight of the frescoed sites in the World Heritage list.  You can take virtual guided tour of the extraordinary frescoes by Giotto in the Scrovegni Chapel in this digital replica with ultra-high resolution photographs. I highly recommend zooming in on the bottom right of the Last Judgement to get a closer look at the rich details of Hell and its many kinds of sinners.