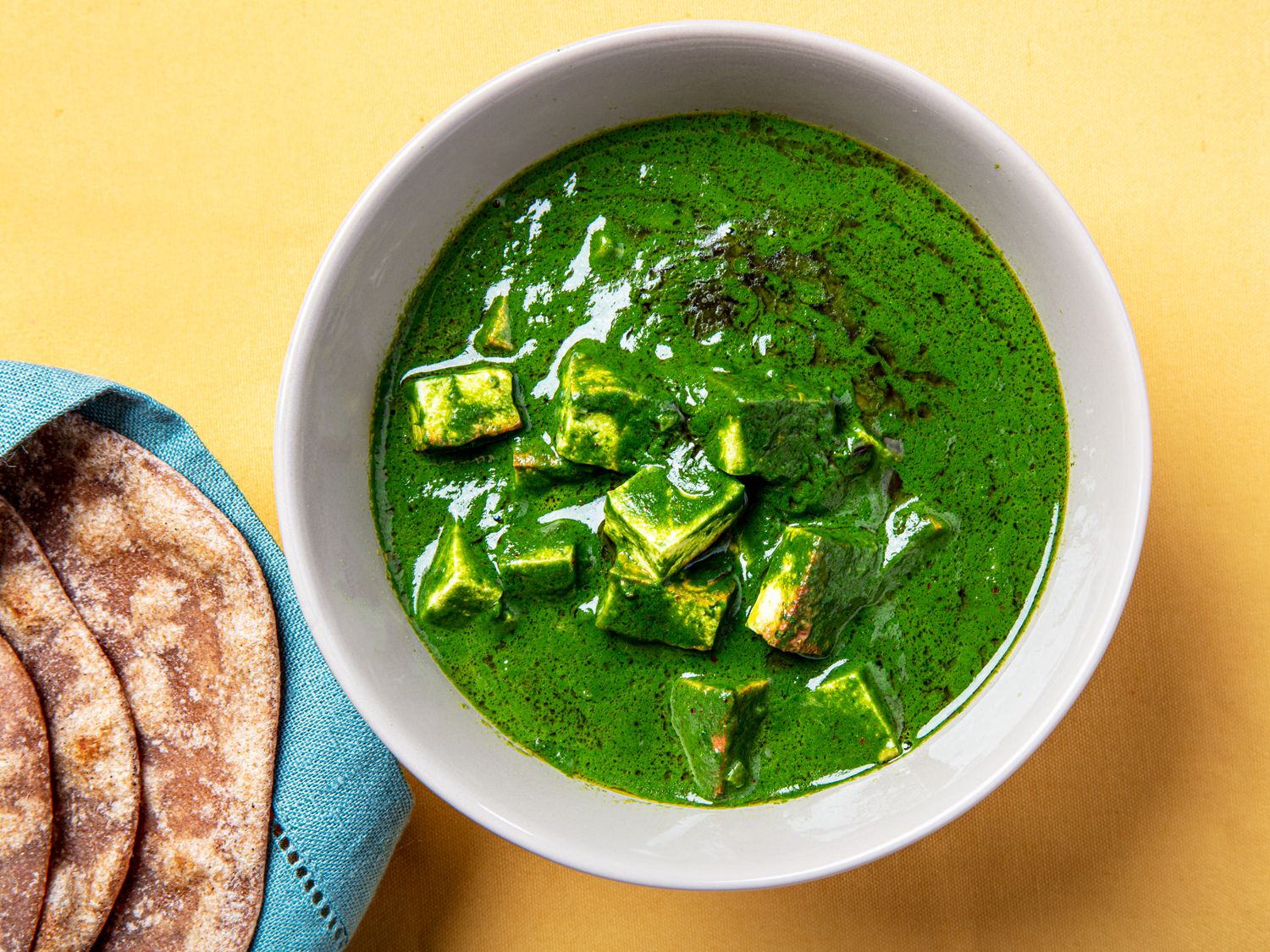 Palak paneer is something I grew up eating. I’m from a Punjabi family, so my mother regularly made it at home. But palak paneer was also a fixture of celebratory meals and occasions, and we’d serve it whenever family members or cousins came to visit—it’s very special for us Punjabis. It’s almost always included as part of the menu for Punjabi weddings; I can’t really remember a single wedding I’ve attended where palak paneer wasn’t served.

This particular recipe is my mother’s, and I like her version the best in part because it’s so simple. There aren’t any extra spices, which lets the spinach flavor shine. The creamy spinach sauce has a touch of garlic and chile to deepen its flavor and make it more interesting, and it complements the chunks of paneer perfectly. I fry the paneer in ghee to give it some texture and add a layer of flavor, and a small amount of cream toward the end ties everything together beautifully.

When I moved the UK, I encountered for the first time saag aloo, a dish of puréed spinach and chunks of potato, which I think must have been inspired by or derived from palak paneer. I have to admit I didn’t care for it very much; I was surprised by the substitution of potato for paneer, and the name was a little confusing to me, because I’d only heard "saag" used to refer to sarson, or mustard leaves. The saag aloo I tried also tasted very different from the palak paneer I ate growing up; the restaurants added so much more to the spinach sauce—onion, garam masala, etc.—which changed the nature of the dish entirely. While it might still be delicious to eat, it’s very different from palak paneer.

The recipe I’m sharing here is closer to my idea of a "true" palak paneer, and I hope you try it, if only so you can see how the subtle use of spices can sometimes add much more to a dish than using everything in your spice box.

The process is very simple: I wilt the spinach leaves by cooking them with a little water in a covered pot, then purée them in a blender. I fry the paneer in some oil in another pan, set the paneer aside, and in the same pan I heat some oil with whole mustard and cumin seeds until the seeds start to pop, at which point I add a little minced garlic. I pour the purée into the pan, season it with salt and chile powder, add the fried paneer and a touch of cream, mix, and serve with some kind of piping hot flatbread—chapati, roti, naan, or parathas all would work well.

Combine spinach with 1/2 cup (120ml) water in a 3-quart saucier and place over high heat. Bring water to a boil, cover, reduce heat to medium-low, and cook until spinach is completely wilted, about 5 minutes. Transfer contents of pan to countertop blender and blend on high speed until completely smooth, about 1 minute. Set purée aside.

Wipe out saucier with clean kitchen towel or paper towel. Add 2 tablespoons of oil to the saucier and place over medium-high heat until shimmering. Add half of the paneer pieces and cook, flipping once, until golden, about 2 minutes. Transfer paneer to plate and repeat with remaining paneer pieces. Add remaining tablespoon of oil to pan along with cumin and mustard seeds and cook until seed begin to pop, about 30 seconds. Add garlic, stir, and cook until aromatic and pieces start to take on some color, about 30 seconds.

In a sealed container, palak paneer will keep in the refrigerator for up to 4 days.