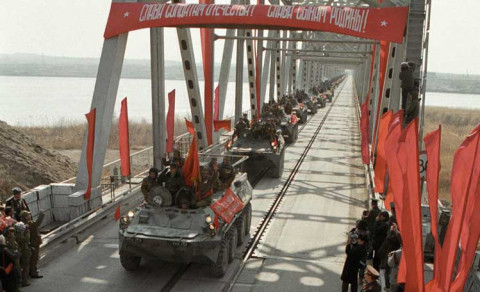 ‘The pursuit of modernity is often violent’, Elisabeth Leake writes in Afghan Crucible, her impressive new account of the Soviet invasion and occupation of Afghanistan. For readers who might be tempted to disengage in despair when their eyes fall on the word ‘Afghanistan’ in a news report, this is a book that explains why what has happened there over the last few decades matters so much. Leake persuasively argues for the Soviet intervention as the apex of Cold War imperialism – this, in other words, was an episode that affected the global order that existed then.

The Oxford English Dictionary offers ‘a situation of severe trial, or in which different elements interact to produce something new’ as one definition of the word crucible. Leake is right to emphasise, as she does early on, ‘a key point that it is easy to overlook with hindsight: the Soviets entering Afghanistan did not see an ignominious withdrawal’. The Soviet inability to come through their severe trial in any way that might be considered a success has since been followed by the much more recent retreat of the US. Washington’s own ‘ignominious withdrawal’ from Afghanistan is outside Leake’s period of study, yet her assessment of the Soviet experience also offers the reader insights into the shortcomings of the CIA’s analysis during the period. They may in turn give clues as to where Moscow’s Cold War foe would itself go wrong. ‘Several overriding themes appeared in intelligence reports’, Leake tells us. ‘The most prominent harked back to embassy officials’ reliance on British colonial tropes, comparison between Afghans and American Indians, and focus on the general backwardness of the country.’ There are echoes here of accounts of T.E. Lawrence’s Seven Pillars of Wisdom being widely read by US Army officers during the war in Iraq.

Although the first chapter of Afghan Crucible is entitled ‘Afghanistan’s Many Pasts’, the author is clear from the outset that the story of the Soviet occupation does not unfold in a country that is hostage to a backward, tribal past – although Soviet observers shared that misconception with the CIA. In his book Afgantsy, Rodric Braithwaite quoted a Soviet correspondent observing a ‘striking contrast’ at a celebration of the Afghan New Year in 1982: women in chadors watching women parachutists. ‘You don’t have to be a prophet to foretell the victory of the parachute’, the Soviet reporter smugly concluded.

Of course, it was not that simple. Instead, as Leake shows us, the Soviet forces entered a country where different visions of what it means to be modern – and the efforts to make those visions a reality – competed and clashed with each other. Those different visions are clear in Leake’s case studies of attitudes in Moscow, Islamabad, Peshawar-Panshir and Washington – each backed with meticulous research – which show how the regional and global powers of the Cold War influenced the differing ideas of modernity proposed for Afghanistan’s future. In her acknowledgments, Leake thanks Odd Arne Westad for his ‘wise counsel’ and in this respect her book builds on some of the ideas of modernity Westad discussed in The Cold War: A World History. The overall result is a compelling read built on Leake’s impressive scholarship and mastery of multiple sources – and an important contribution to our understanding not only of Afghanistan, but its effect on the international politics of the late Cold War era.

James Rodgers is the author of Assignment Moscow: Reporting on Russia from Lenin to Putin (I.B. Tauris, 2020) and a former BBC Moscow correspondent.