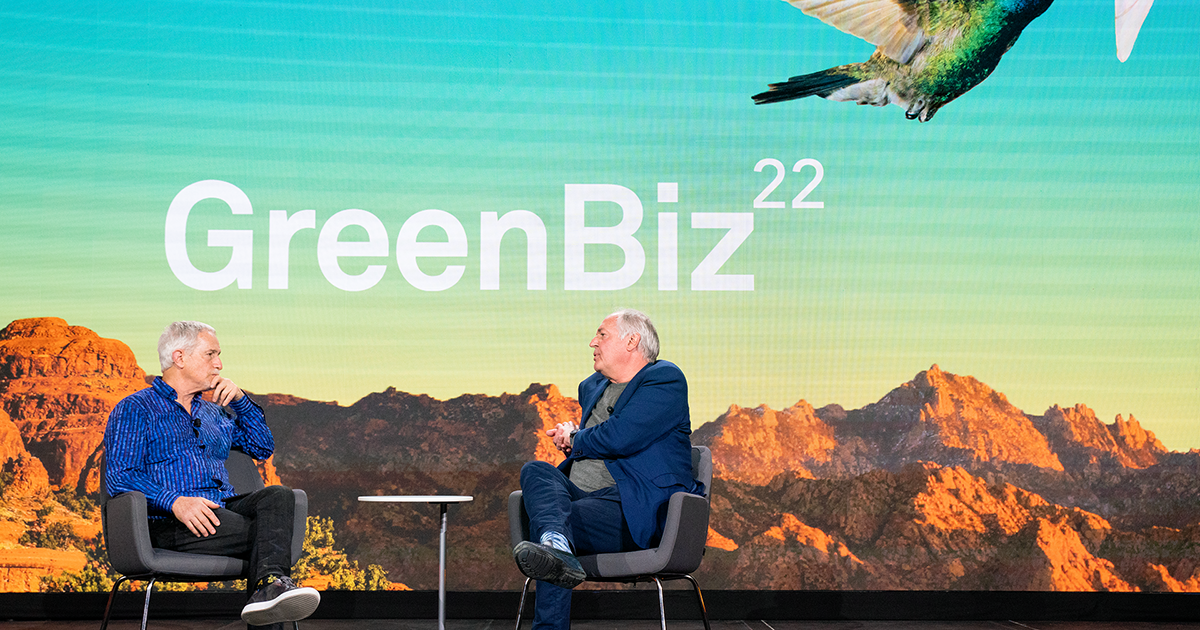 The world has reached a tipping point in terms of climate action, according to former Unilever CEO Paul Polman. Awareness of environmental, social and governance issues reached new levels around COP26 in Glasgow, and more corporations are clamoring to share their good environmental intentions lately, including net-zero goals.

However, this tipping point is a negative one, he said Tuesday at the GreenBiz 22 event in Scottsdale, Arizona. “Why is this the most dangerous point? Everybody feels that they’re doing more than they’ve ever done before. They’ll say they’re all exhausted, and rightfully so.”

At the same time that sustainability advocates may be running on fumes, the scale of the threats to the planet exceeds the pace of solutions proliferating to address them, and this gap is only getting wider, Polman told GreenBiz co-founder and chairman Joel Makower (who also interviewed Polman in October).

What would close this gap?

Companies talk too often about incremental improvements that optimize the current system, Polman said. “Whatever it is, if it’s poverty or if it’s climate change or plastics in the oceans, optimizing a current system that simply is not designed anymore to deliver will only bring you so far. And I think we’re at that point right now.”

Instead, Polman advocates for a holistic approach, advanced in his 2021 book co-authored with Andrew Winston, “Net Positive: How Courageous Companies Thrive by Giving More Than They Take.” Here are three big shifts the co-founder and co-CEO of the Imagine consultancy is pushing for corporate leaders to make:

In a world that has overshot its planetary boundaries, net zero is the wrong target and will quickly become obsolete, he said. Companies seeking to reach net-zero carbon by, say, 2050 or 2060 avoid fulfilling their obligations to eliminate the root causes of their emissions by emphasizing solutions such as carbon capture and storage, Polman added. “And I think that society simply doesn’t accept it.”

Another shortfall: Less than 10 percent of the world’s top public companies have committed to science-based targets. Among them, only 8 percent have targets for 2030 backed up by concrete plans.

Optimizing a current system that simply is not designed anymore to deliver will only bring you so far.

“We can talk to ourselves in these echo chambers, but it doesn’t work,” the Dutch businessman said. “And it is because we define good enough in a way that isn’t sufficient.”

What needs to be embraced is a regenerative model that embraces net positivity. Polman lauded these starting points as examples worth emulating for business leaders seeking to ratchet up their ambitions beyond the usual net-zero fare:

Achieving systemic change requires looking holistically at intertwined forces and beyond the role of carbon emissions in climate change, taking into account social equality, racial inclusion, biodiversity protection and more — all of which takes a strong moral core, Polman said.

Think long term, use your size and scale to drive change across systems, and take advantage of the multiplier effect, he advised corporate sustainability professionals. Polman recounted leading Unilever to transform its factories to zero waste to landfill, a goal achieved in 2016 two years early, which improved factory operations overall. “Anything you can do should have a bigger ripple effect,” he said.

Take plastics, for example: Many chemical companies are pursuing “wonderful things” by pursuing bioplastics and encouraging recycling and reduced use of plastics. Yet COVID is driving an exponential growth in the appetite for single-use plastic, Polman explained.

It’s much cheaper to make a new plastic bottle than to recycle an old one. That problem has largely been solved with aluminum, which has relatively high recycling rates thanks to various recycling systems and deposit programs, he added.

A systems change for plastics would mean, for example, taxing the production of monomers and polymers, which is concentrated within a relatively small industry, Polman said. “And then it becomes more interesting to recycle.” Meanwhile, other things can be done to transition away from fossil fuels.

“At the end of the day, you start with listening — the famous thing that we have two ears and one mouth — but listen to all your stakeholders, listen to the people that you’re really trying to serve, understand what the real issues are out there,” said Polman, a former executive at Nestlé and Procter & Gamble. Then, find out what your company can do to make it better, he said.

Polman presses for companies to join organizations and events that bring together varied players to accelerate action, such as the United Nations Global Compact, industry associations or commitment groups of CEOs. Polman co-launched with Valerie Keller the foundation Imagine in 2019 to help CEOs reach targets, such as the U.N. Sustainable Development Goals, that can’t be addressed well by a single entity.

Polman figures that depending upon what you want to do, it takes a collective of about 15 percent to 20 percent to drive critical mass for systems change in an industry. To that end, since 2019, Imagine has allied 80 CEOs on its Fashion Pact to stop global warming and protect biodiversity and the oceans. The Imagine Food Collective engages 27 CEOs in food and agriculture to work toward net positivity in that industry.

Engaging actors across the value chain is critical, particularly because it empowers leaders of smaller companies, Polman said. For example, they may not be able to reach economically efficient green energy on their own, but they can collectively buy it with other organizations. Or they may not know how to internalize science-based targets for nature, but they can work with NGOs such as Conservation International for help, he continued.

“The benefit of a collective is that you get out of this prisoner’s dilemma, that you can scale right away so that the cost equations often don’t become a bottleneck,” Polman said.

It starts not with a technology or a single power, but with working together on areas of common interest, he continued. “I keep saying, increasingly, we need to move this area of pre-competitiveness to a bigger space than what it is right now. We should not compete on the future of humanity.”