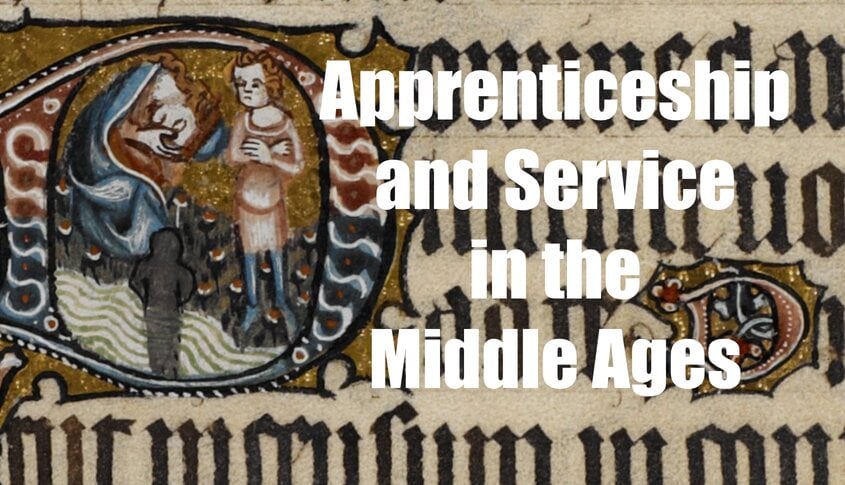 In peasant families of Western Europe, the tradition of passing on the farm to one of the children, ideally a male, prevailed. But what happened to the other children? Some received a few pieces of land but would have to complement their earnings by leasing their work to employers. Other children were entrusted to a master to learn a trade, either in their community or in a more distant town or city. Being from the humble milieux of society, the sons and daughters of medieval peasants had few chances to learn the art of commerce. Indeed, sources show that they usually received formal training in middling trades, such as shoemaking, carpentry, or the food industry. Peasants’ daughters were often indentured as servants, while sons were indentured as apprentices.

The present article focuses on the south of France, more specifically the region of Montpellier, where I conduct my research. It is based on the analysis of apprenticeship and work contracts I’ve studied for the past 10+ years. I have gathered 450 work contracts spanning the years c. 1300-1500 drafted in the diocese of Maguelone, of which Montpellier, which counted over 30,000 inhabitants before the Black Death, was the main city. Only 3% of these contracts were planning for employment in the rural areas of the diocese. Written work contracts, then, were more common in the city of Montpellier than in the smaller communities. But 60% of the employees were immigrants coming from the rural areas of the diocese or from adjacent dioceses and who had moved to the city looking for work. Among the employees were a large number of children, teenagers and young adults born to peasant families and who were placed in apprenticeship or service to various employers.

Urban and Rural Peasants and Their Children

Two-thirds of the employees contracted in the sources were either explicitly underage (under 21) or were indentured by a parent, a relative, or a guardian, to a master (304 contracts out of 450). The fact that an adult concluded the contract on behalf of the young or approved the placement signals that the employee was deemed to be young enough to be under parental authority. Among the 304 young employees identified in the sources, the father’s profession is known in 55% of the cases (165 contracts). About one-quarter of the fathers whose occupation was known were peasants (39 contracts). The high rate of under-recording of the father’s profession suggests that the number of children who came from a peasant family was much higher, particularly in the case of the young immigrants who had travelled from rural areas. These young immigrants from rural areas make up about 60% of the young employees.

Choices had to be made when peasant parents were to decide who, among their children, would inherit the family farm, and who would have to find employment elsewhere. In a recent article, I have shown that the average number of children per married couple was fairly high in the rural areas of the diocese of Maguelone. Married testators from the backcountry had for instance close to three children on average between c. 1325-1348. The Black Death and following waves of plague impacted the size of families and reduced the number of children in rural hearths counted. But, from c. 1425 onwards, the family coefficient rose again and exceeded two children per family. In addition, about 30% of the rural families who had children alive counted four and more kids.

When rural parents decided to transmit their estates to their children, they usually endowed their daughters with cash or a few pieces of land. In two-thirds of their wills, they donated their farm and the bulk of their lands to only one male son. The other sons received money (a smaller sum than their sisters had got) or/and a few pieces of land. In general – but there were exceptions to this rule – neither the daughters’ dowry nor the sons’ endowments sufficed to make a living from. While the daughters were expected to be married off, the sons were often trained in artisanal trades or would work as employees on others’ farms. Maybe, one day, they could purchase enough land to own a farm.

An important but often overlooked fact about apprenticeship and service contracts in the Middle Ages is that drafting a contract was probably not the norm. Indeed, parents and relatives often trained the children of their kin, without drafting any written contract. A proof of this statement is that sources rarely show work contracts concluded between related individuals, but that craft statutes from Montpellier – framing the fees due by workers – exempted from fees the training of relatives. For instance, a master cobbler taking in a nephew as an apprentice wouldn’t pay any fees to the craft. But if they were to train a stranger, then they would have to pay fees. Likewise, a master cobbler would not pay any fee for his son if he was to train him.

The 39 children and teenagers whose father was or had been a peasant were divided into 15 girls and 24 boys. We only know the ages of 12 of them, most of whom were teenagers or young adults (age 12-20). Customary practices framing the placement of young employees usually meant that children were placed from age 12 in a stranger’s family. After a few years of work, they moved on to other contracts. Boys in their late teens who had benefited from prior training could expect to be paid when entering another work agreement. Girls were mainly indentured as servants, as we shall see, and often received, in exchange for their work, a dowry. Data suggests that immigrant girls working as servants in the city of Montpellier got married, on average, when reaching the age of 17.

If it was customary to place one’s child in service or apprenticeship when they reached their teens, some kids were placed at a younger age. In 1453 for instance, a peasant from Montpellier indentured his 8-year-old son Hugonin to a horse-seller. Hugonin would become the servant of Thomas, the horse seller’s son, who was studying medicine at the University of Montpellier. Hugonin would specifically carry Thomas’ books to and from the university and would serve him when his help would be needed. In exchange, Hugonin would receive food and shelter, clothes and shoes, as well as education. The contract indeed provided that Thomas would teach his servant “the science of the clerics,” probably reading and writing. The prospect of seeing one’s child gaining these valuable skills had probably provided an impetus to the placement.

Here is a list of the jobs that the 39 peasants’ children would learn or perform:

First, domestic service represented nearly one-third of the placements. Nine girls and three boys were indentured as servants, making service the most common type of job for peasant girls. A series of contracts from 1425 shows a farmer placing his three daughters in service in Montpellier with three different masters. The father was named Johan Paparelli and was a farmer from St. Étienne de Viol, in the diocese of Maguelone. His daughter Catherina became the servant of Sperta, the wife of a Montpellier dyer; after six years of work she would receive 12 livres tournois from her mistress as a dowry. Florencia was hired as the servant of an arbalester of the city, under the same conditions. Their younger sister Astruga was placed with Peyroneta, a female mercer, for eight years; her dowry would amount to 10 livres tournois.

Farming was the second most frequent avenue of work for the children of peasants. Three male teenagers were hired specifically to work as ploughmen. They were not apprentices but young employees. In 1425, Philip, age 15, came to Montpellier after the death of his father, a farmer from a distant diocese. Philip landed a job with an urban farmer, for three years. He would work under his employer’s orders, he would receive a bed, food and clothing, and a salary of 15 golden moutons for the three years of work. Probably trained at their parents’ farm, these teenagers leased their services at other people’s farms and all received a wage.

The other jobs testify to the great diversity and variety of work in artisanal trades and retail in large urban centres. The textile industry employed seven of these peasant children and teenagers. All the girls indentured as apprentices would learn trades related to clothing, in which medieval women were highly involved. Montpellier did not produce a lot of woollen textiles, but was famous for its red dyeing made from the processing of insects called cochineal. The leather industry was also an important source of work in the city. Three apprentices – all male – would learn jobs related to leather. One would learn tannery, another shoemaking, and the third one belt making.

A wide array of jobs existed in medieval cities that the children of urban and rural peasants could learn to hopefully make a life for themselves. Which one would you have chosen?

Reyerson, Kathryn, The Art of the Deal: Intermediaries of Trade in Medieval Montpellier (Brill, 2002)

Classen, Albrecht, (éd.), Childhood in the Middle Ages and Renaissance. The Results of a Paradigm Shift in the History of Mentality (De Guyter, 2005)

Top Image: A man and his young servant wait for rain in this fourteenth-century manuscript. British Library Egerton 3277 fol. 93v