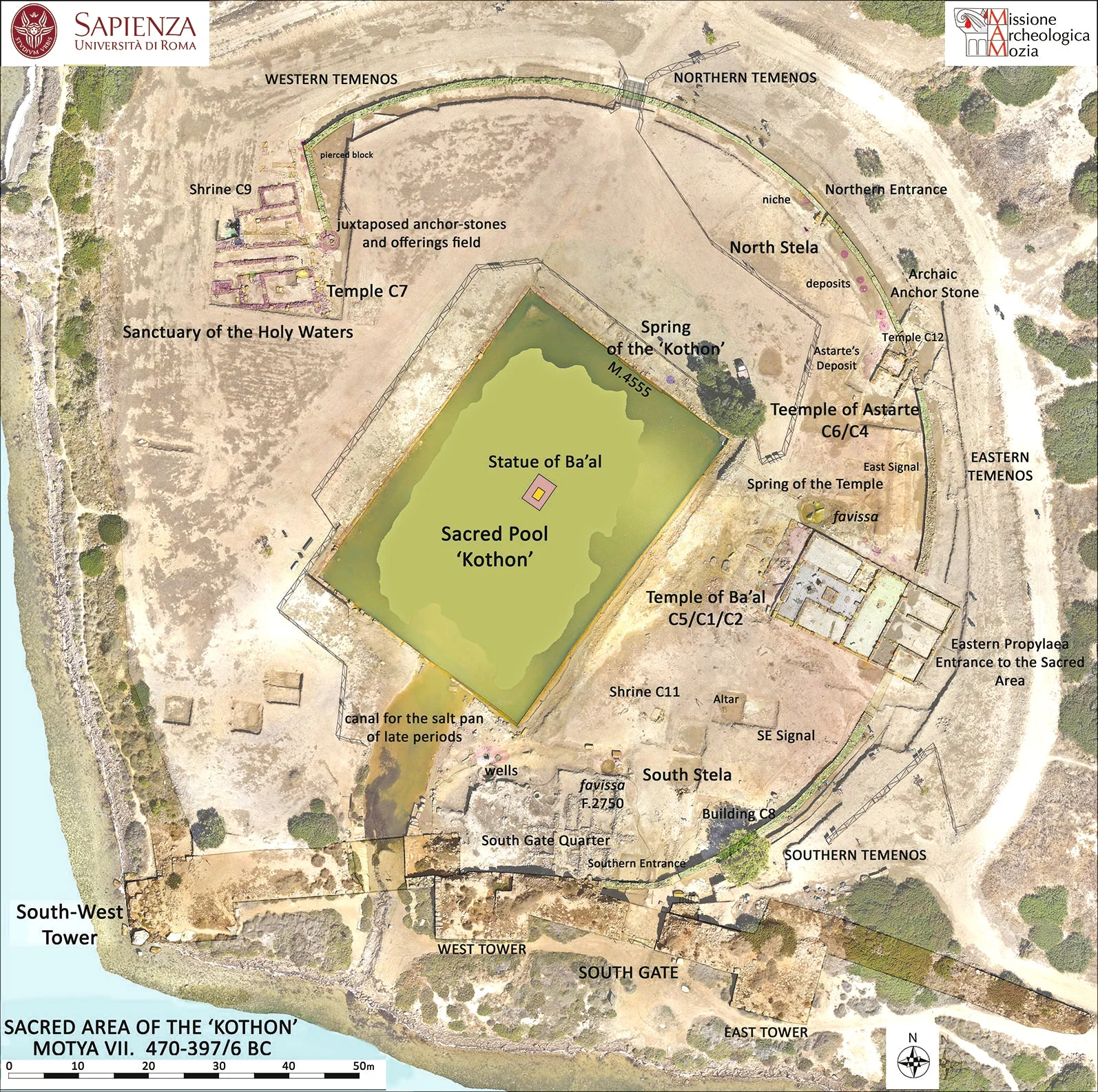 Occupied since the Bronze Age, the island of Motya has an excellent protected natural harbor and its strategic location between the coasts of North Africa, Iberia and Sardinia drew the attention of Phoenicians who settled on the island in the early 8th century B.C. The island grew into an important port for the trade networks of the Mediterranean.

Motya’s success made it a plum prize for its Phoenician cousins from Carthage. In the middle of the 6th century B.C., Carthaginians attacked and destroyed the city-island. It was rebuilt on a grander scale with a massive defensive wall and two monumental religious complexes. The monumental pool, originally a natural pond with a stone block side, was built during this reconstruction period.

The rectangular, stone-lined basin was first explored archaeologically in the early 1900s by  archaeologist Joseph Whitaker. He identified a channel of water as a conduit linking the basin to the Mediterranean. He dubbed it a “Kothon” after the Greek name for Carthage’s artificial ring-shaped harbor. It wasn’t the strongest of hypotheses. The pool was relatively small for a harbor (37×52.5 meters), and the water level of the Mediterranean was much lower than it is today, so the basin was further away from the sea. Later archaeologists revised the Kothon interpretation, proposing that it wasn’t so much a harbor as a dry dock for the maintenance and repair of ships.

Recent excavations by a team from the Sapienza University of Rome unearthed a large Temple of Ba’al next to the basin. The temple was very ancient, in use from 800 to 397/6 B.C., and at some point it had been enclosed with a temenos wall that also enclosed the Kothon. A second temple, dedicated to the goddess Astarte, and a third dubbed the “Sanctuary of the Holy Waters” were also found within the temenos. This strongly suggests that the basin’s purpose was also religious. A stone platform in the center of the pool may have been a podium for a statue of a deity, perhaps Ba’al, judging by a dedication to “Belios,” (the Greek name for Ba’al) found in a votive pit in the corner of the basin. 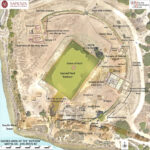 The doom of the harbor theory was finally sealed when the pool was drained for full excavation. The team discovered that the basin was fed by three natural underground freshwater springs, not by a channel from the sea, and that it was very shallow, just five feet at the deepest point. No Phoenician warship or merchant vessel was tiny enough to dock in five feet of water.

Excavation and survey work allow us to identify the planning concept behind the sacred complex, and the functional and symbolic nature of its various alignments. The arrangement of buildings, stelae, altars, bothroi (pits), votive offerings … and other features within the enclosure, suggest a place of religious activity dedicated to the sacred waters, the sky and the associated gods—all key elements of Phoenician religious beliefs.

The sacred pool was put to practical use by the Romans who farmed fish in it and used it in the production of lime. It was repurposed again between the 16th and 18th centuries as a salt pan. It was during this latter use that the channel was dug connecting the pool to the Marsala Lagoon and the sea.

The recent discoveries at Motya have wide implications, especially in connection with the origins of the Phoenician settlement, its transformation into a city and the function of some of its major monuments. The cultic and astronomical role played by the sacred enclosure and pool in the origins and development of Motya, advanced here, adds another element, showing that Motya was open to cultural

interactions and hybridisation, counterbalancing Carthage’s growing political and economic domination. Consequently, Motya was a site quite different from the rising western Phoenician power of Carthage. It remained a flourishing free-port and, in time, developed an open attitude, especially towards Greece and the Greek cities of Sicily. Carthage’s disappointment with this attitude, however, was the cause of a delay in help for Motya, when the tyrant Syracuse Dionysius placed the city under siege and then destroyed it in 397–396 BC.