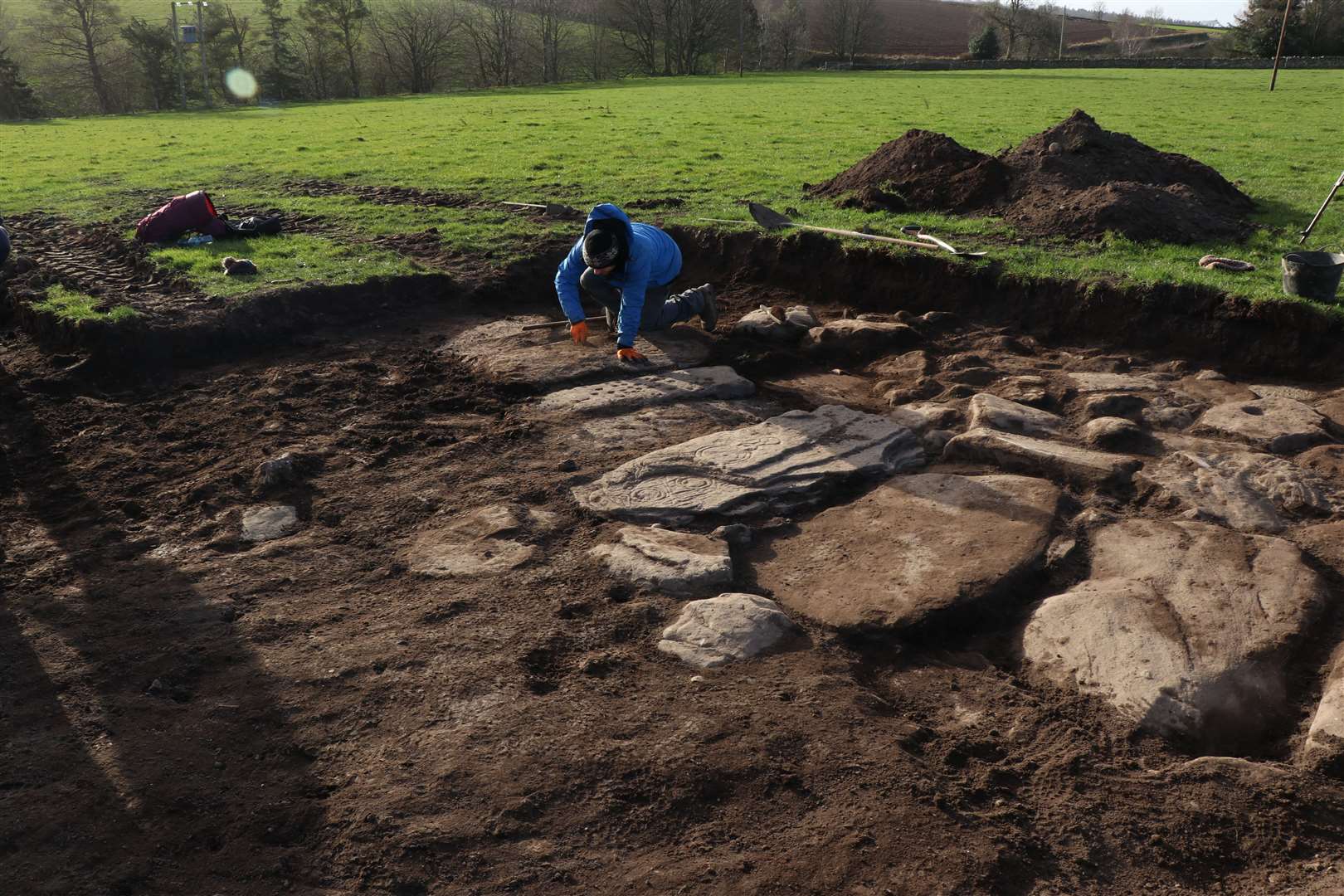 Archaeologists have unearthed a rare Pictish symbol stone dating to the 5th or 6th century in the village of Aberlemno, Scotland. Aberlemno is known for a group of Pictish and Early Medieval standing stones, the most famous of which depicts a clash of armed infantry and cavalry forces believed to have been the Battle of Nechtansmere where the Picts defeated the Northumbrians in 685 A.D., ending Northumbrian control of Scotland once and for all.

University of Aberdeen archaeologists discovered the slab during a geophysical survey of the site as part of a larger study of the context of the Aberlemno Sculptured Stones. The scans revealed the presence of anomalies that might be connected to an ancient settlement. The team dug a small test pit and almost immediately encountered a slab 5.5 feet long lying on its back. As the soil was removed, Pictish symbols were revealed.

The large stone is incised with a variety of symbols, including the mirror and comb, a crescent, V-rod, triple ovals and the double disc and z-rod designs. Next to it was another slab carved with cup-markings typical of prehistoric symbol stones. These were sometimes reused by the Picts who would add their own carvings to the far more ancient monuments. This was likely a deliberate choice reflecting Pictish understanding of the symbolic significance of their Bronze Age predecessors’ rock art.

The stone was embedded in a pavement that was part of a building from the 11th or 12th century, so it was not in its original location like the other standing stones of Aberlemno. There is evidence that the later medieval building was constructed directly above far older settlement layers going back to the Pictish era.

Professor Gordon Noble who leads the project says stumbling upon a stone as part of an archaeological dig is very unusual.

“Here at the University of Aberdeen we’ve been leading Pictish research for the last decade but none of us have ever found a symbol stone before,” he said.

“There are only around 200 of these monuments known. They are occasionally dug up by farmers ploughing fields or during the course of road building but by the time we get to analyse them, much of what surrounds them has already been disturbed.

“To come across something like this while digging one small test pit is absolutely remarkable and none of us could quite believe our luck. 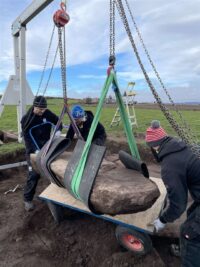 “The benefits of making a find in this way are that we can do much more detailed work in regard to the context. We can examine and date the layers underneath it and extract much more detailed information without losing vital evidence. […]

“The discovery of this new Pictish symbol stone and evidence that this site was occupied over such a long period will offer new insights into this significant period in the history of Scotland as well as helping us to better understand how and why this part of Angus became a key Pictish landscape and latterly an integral part of the kingdoms of Alba and Scotland.”

The stone was lifted and transported to the to Graciela Ainsworth conservation lab in Edinburgh for additional study. The University of Aberdeen will work with the Pictish Arts Society to raise funds for the symbol stone’s conservation and eventual display.