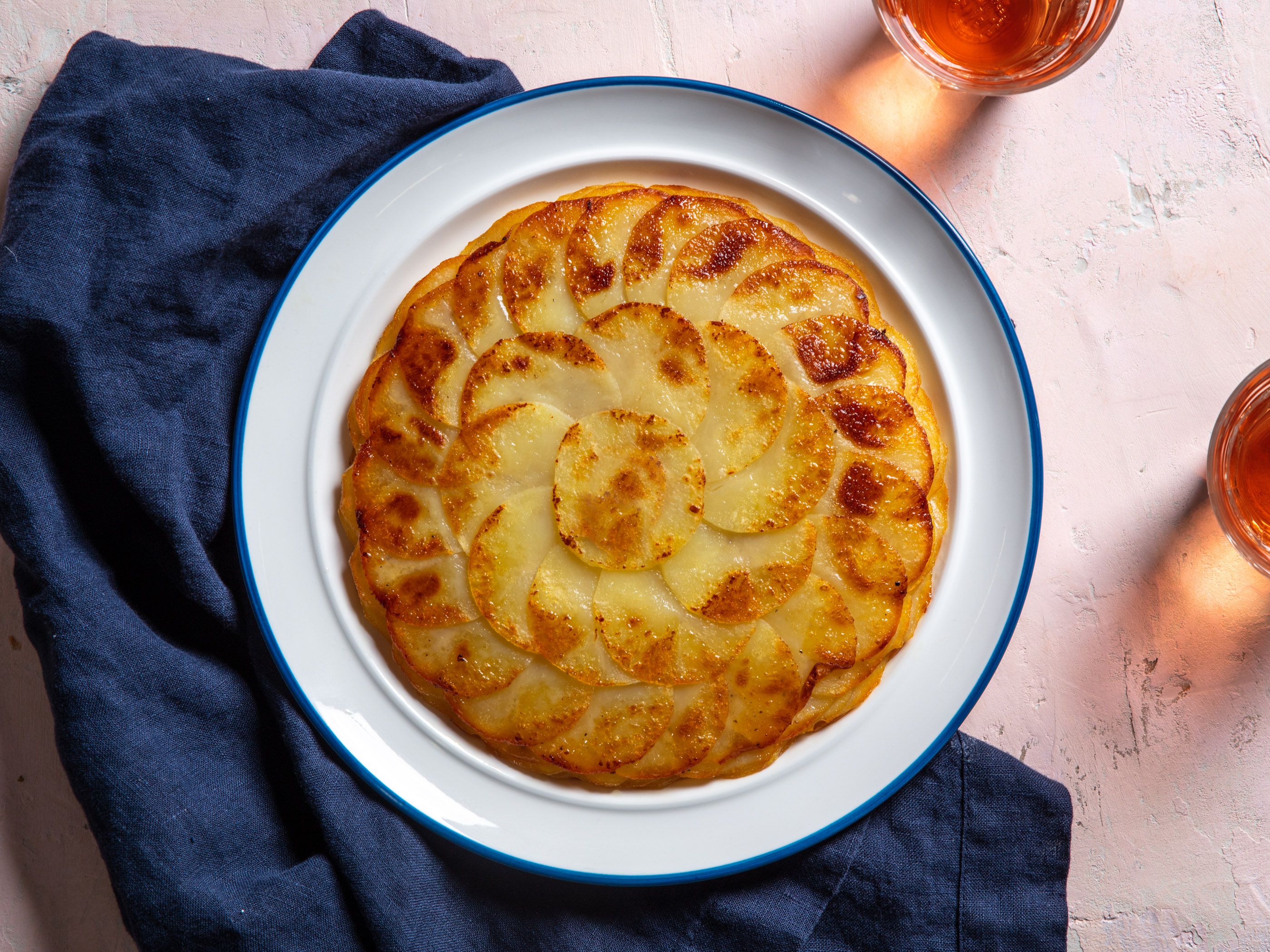 In my years as a recipe developer, there have been times when, after rounds of testing and tinkering with a recipe, my advice to the reader has been frank: The path to success isn’t with novel methods or tricks, it’s by practicing the classic technique. (See: French omelette and tortilla española.) I couldn’t let that be my message with pommes Anna.

A visual showstopper, pommes Anna features thinly sliced potato layered into a cake of beautifully shingled concentric rings that’s cooked until tender inside and crisp and golden on top. Traditional recipes call for a finicky and failure-prone approach of building the cake in a hot pan, with the cook having to meticulously arrange the potato slices as they fry in scalding butter. It’s a questionable method on the best of days, one that, yes, with regular practice can be perfected. But it’s not the kind of dish most home cooks are likely to make often—certainly not often enough to get to the point where failure isn’t a distinct possibility.

Some recipes try to circumvent these risks by building—not a cake—but something more akin to a potato crisp that is all of one or maybe two layers thick. This still involves building the layers in a hot pan, so it’s still not exactly risk-free. I suppose that’s one option, though I think it shortchanges the pommes Anna, which in my opinion is better when made with multiple layers, offering more substance, more textural contrast, and more "wow" factor.

A properly executed pommes Anna is, without question, stunning. It’s stunning enough to fully warrant making—at least on occasion, for someone you love or at the very least want to impress with culinary flair. So, if the traditional method is too hit-or-miss, and the modified methods produce a potato cracker that isn’t grand enough, what’s a recipe developer to do? Welp, I guess I could rethink the technique.

Reinventing Pommes Anna: The Road to a (Near) Foolproof Method

Attempting to assemble the intricate concentric rings and multiple layers of potato in a pan over high heat was clearly a bad idea. But my first stroke of inspiration still came from tradition: the pommes Anna pan. Yes, there exists a pan just for this, and at least the linked model can be had for the low, low price of just $500 (at the time of publication). To be clear, I do not think you should buy that pan, unless you’re a billionaire, in which case you should buy ten of them to use as hat boxes for your bowler collection.

The classic pommes Anna pan has straight, cylindrical sides and a flat bottom, and is roughly nine inches across. You know what else has straight sides and is roughly nine inches across? An 8-inch cake pan. I knew I wanted to get my pommes Anna away from that whole build-it-on-the-heat-on-the-stovetop thing, so why not build it in a cake pan and cook that in the oven instead? This would allow ample time to carefully build all the layers without worrying about speed or burns.

One of the challenges of the traditional pommes Anna method is nailing the timing so that the top is perfectly browned and crisp at the same time the under-layers are cooked and tender. By building the pommes Anna in a cake pan and baking it first, I could solve that problem too by separating the tenderizing and browning steps. The fully-cooked pommes Anna cake, once unmolded, could just be browned and crisped in a skillet at the very end.

Some weeks after developing this method, I became aware that I wasn’t the first to land on the cake pan epiphany: Jacques Pépin had beat me to the punch by several decades, recommending a similar approach in his classic, Complete Techniques. He doesn’t do the final browning step in the skillet, which I’ve found to be essential to getting the pommes Anna to its ultimate form, but it does goes to show that very little in this world is new, and Jacques Pépin is a legend for a reason.

Choosing and Handling the Potatoes

My alternate method was coming into focus, but I still had details to work out. First: choosing the potatoes. Here in the United States, potato options are slim. We have starchy russets, silky Yukon Golds, basic white and red potatoes, and that’s more or less it most of the time. A lot of people reach for russets here, but my tests convinced me Yukon Golds are the better choice. They’re silkier, which creates a more appealing texture in the interior of the potato cake, one that’s more elegant and less powdery. They also have more flavor, which makes a difference in a simple, if ornate, potato cake like this.

The other thing to figure out in terms of handling the potatoes was whether to bother making the rounds perfect circles by punching them out with a round ring mold. On the one hand, it enhances the pommes Anna’s appearance, and as I’ve made clear, appearance is a big reason to make this. On the other, stamping out the rounds is fussy and creates food waste.

I ended up writing that step into the recipe as an optional one; it’s how I prepared the potatoes in the photos you see here, but there’s a little trick with this as well. Much like the fake building fronts on a movie set, the potatoes in pommes Anna only need to be stamped out for the visible top layer (this is, to be clear, the bottom layer when you’re building it upside down in the pan). Punching out a couple dozen potato rounds is way less of a nuisance than punching out a couple hundred of them, which is a pretty good compromise in my book. Make it shine where you can see it, don’t bother where you can’t.

Using my method, pommes anna becomes a much more doable, much more manageable, much more foolproof recipe. Still, there are some key points to keep in mind as you’re making it:

Follow these tips, and you really won’t need much practice at all for a pommes Anna worthy of a glossy magazine cover.

Peel potatoes and hold them in a bowl of cold water to prevent discoloration. Working with one potato at a time and using a mandoline, slice potatoes crosswise 1mm thick. If desired, select a round cookie cutter just big enough to punch perfect circles from the potato slices; make small stacks of potato slices and punch out the circles, discarding scraps or saving for another use (if you do decide to make potato circles, note that you only need to do it for the first layer or two of the pommes Anna, after that you can just use the remaining potato slices as-is).

Using a pastry brush, gently brush the potato layer with clarified butter, then season lightly with salt and pepper. Repeat this pattern in layers with remaining potatoes until you’ve made 5 or 6 layers, seasoning each layer with salt and pepper and brushing lightly with clarified butter each time. Weigh down the layered potatoes with a small flat lid or oven-safe plate (spray the side of the lid or plate that will touch the potatoes with nonstick spray first); if you have oven-safe weights to add on top, do so, or press down firmly with your hands.

Allow layered potatoes to stand 15 minutes, pressing down occasionally to help extract as much liquid as possible. Remove the weights, if using, and, using the lid or plate to hold the layered potatoes in place, carefully tip cake pan, and squeezing down on the lid/plate with your fingers, expel and pour out as much liquid as possible. Replace oven-safe weights, if using, and transfer to oven to cook until potatoes are fully tender throughout and can be easily pierced with a paring knife, about 45 minutes. Let cool to room temperature.

When ready to finish, remove weights and lid/plate from potato cake (if any potato slices stick when removing the cover, just put them back as best you can; this will be the non-presentation side of the pommes Anna). Using a paring knife or small offset spatula, carefully slide around the edge of the potato cake to ensure it is not attached to the cake pan. Set a large, flat plate on top of the cake pan, then, in one quick, confident motion, flip to invert. The potato cake may take a second to release, but with a gentle shake or two it should drop onto the plate. If the parchment paper remains attached to the potatoes, carefully remove and discard. Very gently brush or dab top side of potato cake all over with additional clarified butter.

Set an empty, cold, oven-safe 10-inch nonstick skillet over the plate. In another quick, confident motion, flip the potato cake into the skillet.

Set skillet over medium-high heat, add 2 tablespoons (30g) clarified butter, and cook until butter begins to gently sizzle all over. Transfer skillet to the oven and cook until potato cake is heated through, about 10 minutes. Return to medium heat on the stovetop and continue to cook, gently rotating the pan and swirling the potato cake for even browning, until underside is well browned and crisped all over, about 5 minutes longer (use a thin spatula to very slightly lift the potato cake in various spots to check the progress of browning, being careful not to let it fall apart).

Using the lid or plate from baking to hold the potato cake in place in the skillet, pour out the clarified butter into a heatproof bowl so that there is no liquid fat remaining in the skillet.

While wearing oven mitts, set a serving platter on top of the skillet and once more quickly and confidently invert it. Serve the pommes Anna right away, cutting wedges for each diner.

The baked and cooled potato cake can stand at room temperature for up to 2 hours before finishing; it can be wrapped in plastic on the plate it’s turned out onto and refrigerated for up to 1 day (make sure it fully heats through in the oven during the browning process in the skillet).