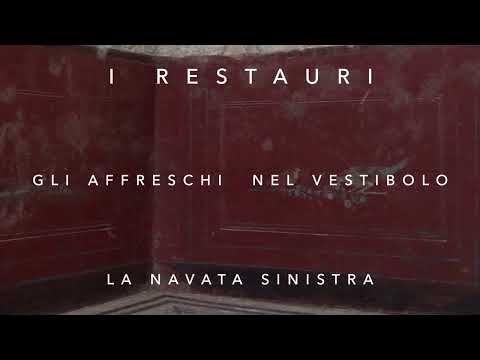 The public has been given a bright new glimpse at the unique basilica of mysterious purpose under Porta Maggiore just outside Rome’s ancient Aurelian walls thanks to the installation of a state-of-the-art illumination system. It is a very brief glimpse — the basilica was only opened from the 18th to the 20th — before the next stage of conservation begins. There is a too-short but wonderful video of conservators cleaning the richly-colored frescoes and of the superb white stucco reliefs on the walls and vaulted ceilings visible in whole new detail under the new lighting.

The new lighting system was inspired by the original one, using LED lights of different colors to suggest the natural illumination that bathed the basilica from the skylight of the vestibule. The apse, which is now white, was originally painted with extremely expensive Egyptian Blue pigment. It was stripped in antiquity, but the LEDs give a hint of the blue that once was.

Built deep under ground level in the 1st century A.D., the basilica has the traditional three-aisled form with aisles divided from the nave by two rows of three square pillars. It is not, however, traditional in purpose. Basilicas were secular buildings in Rome, dedicated to civic purposes like law courts and imperial audiences. It wasn’t until Constantine legalized Christianity in 313 A.D. that he chose to adopt the architectural form in the construction of new Christian churches, so this Julio-Claudian basilica was presciently anomalous. It’s also the only underground basilica ever found.

Its purpose is unknown. It was not a temple. It was not a catacomb. The stucco decoration — mythological scenes including the abduction of Ganymede, Orpheus and Eurydice, Paris and Helen, Chiron teaching Achilles, the head of Medusa — attests to it having had a religious function. Scholars have suggested it may have been a family tomb or a nymphaeum, but the prevailing thought now, based on common motifs in some of the stucco decoration, is that it was a place of worship for elite members of a Neopythagorean mystery religion. If so, they didn’t get to worship there for long. It was infilled with rubble a few years after it was built.

The basilica’s archaeological importance is not reflected in its fame, as it has had little opportunity to be exposed to a public that has a million other ancient marvels to choose from in Rome. Conservation has been a constant problem from the moment it was rediscovered. The sinkhole that alerted to its existence damaged the ceiling. Train vibrations and water infiltration damaged the walls, plaster and frescoes.

A major push for conservation to prevent further deterioration finally succeeded in funding the complete restoration of the interior of the Basilica of Porta Maggiore. The conservation project has been ongoing for more than 15 years. In 2015, the work has progressed sufficiently to allow the basilica to be open to the public on a limited basis. The pandemic shut down even that limited access, but thankfully conservation was able to continue and experts were able to remove efflorescence, carbonation spots and patinas of microorganisms endemic in the damp hypogeal space from the frescoes and stuccoes on the entrance wall, pillars of the left aisle and the vestibule.