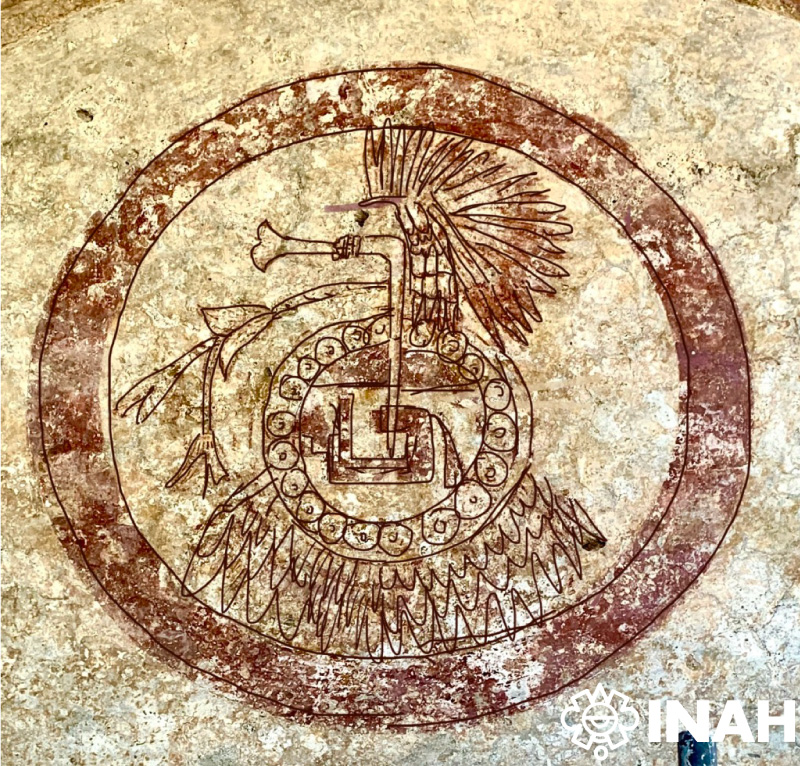 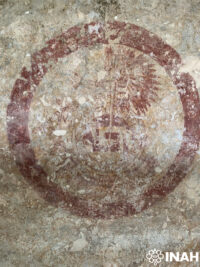 Murals with pre-Hispanic iconography have been discovered on the walls of three chapels in a colonial-era convent in Tepoztlán, about 40 miles south of Mexico City. The murals date to the mid-16th century and contain emblems of Tepoztlán’s traditional religion: a feather headdress, an axe, a Chimalli (feathered shield) and a flowering branch. The iconography is closely linked to Tepoztécatl, the patron deity and mythical ruler of Tepoztlán.

Archaeologists with Mexico’s National Institute of Anthropology and History (INAH) discovered the wall paintings during restoration of the posa temples — small, open-air chapels used to lure in converts whose traditional religious ceremonies were held out of doors — in the atrium of the Convent of the Nativity. Red painted circles are visible on the three chapel walls, but they had nothing inside. Another such circle on the another wall of the convent contains Marian symbols, so restorers removed layers of lime covering up the interiors of the circles thinking they’d find Marian or Christian attributes underneath. Instead, they found attributes of Tepoztecatl. 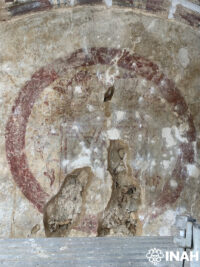 The pre-Hispanic village was burned to the ground by Hernán Cortés in 1521 on the pretext that its leaders had refused to meet with him. His feelings can’t have been too hurt by the rejection as he would soon claim the entire region (and large swaths of central and central Mexico) as his personal holding. Cortés’s giant entailed estate, the Marquesado del Valle de Oaxaca, was set up in 1535, passed on to his son after his death in 1547 and stayed in the hands of the Cortés descendants until the end of the colonial period, but as early as 1522 he was already handing out land grants to his soldiers under the table. The encomienda grants authorized the recipients to extort tribute and forced labor from the indigenous people on the land.

In 1550, Spanish authorities herded the peasants they were actively exploiting and evangelizing into a new settlement at Tepoztlán. The Church and Convent of the Nativity were built at that time, and just as 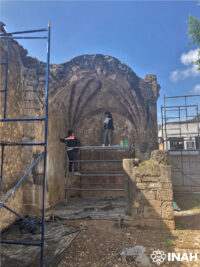 they opened up the church to provide a sort of hybrid sacred space that the Tepoztláns would be more comfortable with than the standard Catholic church, they also deployed the imagery of the area’s local god-man. Even the legend itself was shape-shifted into a hagiography. Tepoztecatl was rewritten as the first convert to Christianity in the region and as the son of the Virgin of the Nativity, a job I was pretty sure was already taken by, you know, Jesus. Tepoztecatl’s big miracle story was that he traveled to Mexico City after his conversion and saw workers struggling to raise the bell into the tower of the cathedral. He called in a favor from his friend the wind god who raised a great whirlwind that swooped the bell through the air into the belltower. So the traditional hero and demi-god who defeated all enemies in the protection of Tepoztlán was mutilated into an example of submission to the Spanish conquerers and the Catholic Church.

The chapel murals are literal illustrations of the syncretism described in the post-conquest accounts of the Tepoztecatl myth.

The team narrates that “as we worked, we discovered a well-preserved red circle. Then we saw some triangles, we thought they corresponded to the crown or splendor of the Virgin Mary, but the feathers of a plume appeared. In the center we saw a well-defined red fret within a circle, a wand with flowers, and a tepoztli (axe), similar to the one in the Tepoztlán glyph. It was not a Christian representation, but a chimalli (pre-Hispanic shield)”. 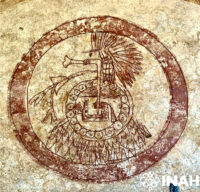 The ancient emblem discovered in Chapel 4 was painted freehand in a diluted red, filled with glazes, and then outlined in the same color. The circle, 11 centimeters thick and just over a meter in diameter, encloses these pre-Hispanic symbols, equal in size to the Marian shield that was also painted in the 16th century in the Posa chapels.

The image, which is repeated, less clearly, in chapels 2 and 3, has generated questions about the reason for the presence of this emblem in such an important place and, even, next to the anagram of the Virgin Mary, and about the relationship between pre-Hispanic culture and Christian worship, a few years after the Spanish invasion.